How much speed of surface currents decrease in ocean depth? Approximately? I am wondering if there is any significant gradient within the top 30m ocean layer? Can this be theoretically calculated?

Yes, the speed of currents varies with depth.

In the case of shallow, coastal water, the flow is retarted by friction at the seabed, so it is slowest at the seabed and usually has a curve of increasing speed towards the surface.

This curve can theoretically be calculated, but in practice it is very sensitive to things like the material and shape of the seabed, wind and waves near the surface, and so forth, so while estimates can be made from theory, it's usually better to measure it.

Approximations are often made using a "power law" such as

where $u_1$ and $u_2$ are the speeds at distances $z_1$ and $z_2$ above the seabed respectively, and $\alpha$ is an arbitrary value often between 5 and 7. This figure, from Lewis et al. 2017 (creative commons licensed), illustrates a number of such theoretical curves with different values of $\alpha$. 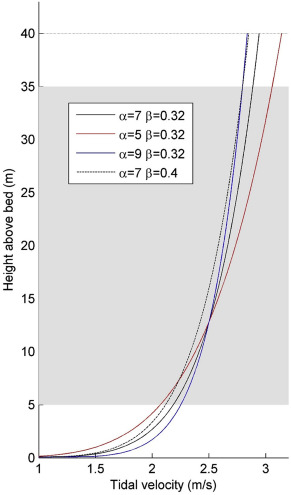 In deeper oceans this mechanism will only apply close to the seabed; however, far more complex systems can come into play, with different water bodies moving in (potentially) different directions. Possibly others with more expertise in ocean dynamics can address that case.

Not the answer you're looking for? Browse other questions tagged ocean-currents or ask your own question.

12
Why is ocean surface velocity around 3% of wind velocity?
10
How to measure ocean vertical velocity?
1
If the Oceans Were Deeper
6
ocean current frequency
2
Making Sense of Coldwater Ocean Currents
5
Depth of the wind-induced currents and the shoreline
8
What goes into a tide power prediction for every fifteen minutes over the next twenty five years?
0
Is it possible to get trapped in a circle of water in a rip current?