I have recently watched the documentary "How Many People Can Live on Planet Earth?" with David Attenborough. In it, the main factors that will limit total human population Earth can support are named. One of these was the limited amount of fresh water. There also was a part where it described how fresh water is distilled from astronaut urine on the International Space Station .

My current understanding is that all the water (fresh or not) in nature (i.e. on planet Earth) is infinitely going through a water cycle, and thus non-fresh water is sort of distilled into fresh by this natural process.

Rain water is still one of the most cleanest water sources available. There may be some ancient underground aquifers that have clean uncontaminated water.

One issue with rain water is that atmospheric moisture - part of the water cycle - needs to condense on aerosols in the atmosphere before it can develop into rain. With the amount of pollution humans are dumping into the atmosphere some of that can form the aerosols that eventually develops into rain thus making rain water dirtier than it used to be - such as acid rain being formed when sulfur dioxides are dumped into the atmosphere when high sulfur coal is burned in power stations. Other aerosols include salt from the oceans.

Regarding the rate of urine production of animals, it depends on the type of animal. A mouse will process water at a different rate to an elephant or domestic live stock. It is also influenced by circadian rhythms for each type of animal.

We do collect rainwater. We normally collect rainwater when it is easier to collect it locally than to get it from where it naturally flows to. If you count dams, we hold back water and collect water that way so it doesn't flow too quickly to the ocean, where it becomes too salty to drink or use for irrigation. Some people also collect rainwater from their roof, while others just leave out an open barrel (that's not much of surface area for collecting rain).

That depends on if the urine is going eventually into a river, shallow groundwater only 50 feet (or less), or a subterranean aquifer a few thousand feet down. It can evaporate immediately from the ground or flow into a river and evaporate the same day. On the other hand, some groundwater percolates far down into the Earth into "aquifers". We remove water from those using wells, and we say those aquifers "recharge" when more water moves into them.

The famous Oglalla aquifer recharges at a rate of about 0.85 inches per year. That is, if we draw it down an inch in a year, it won't even fill up to where it was in the next year. How long it takes water to get to a specific level from the surface is affected by porosity and the amount of water already in the rock. Water can't flow when it is blocked by water, right? Also, much water also moves horizontally as well as vertically. So, asking how long it takes for water to go from X to Y directly below it would assume that water even follows that path. It might be that Y only gets water from a far-away location Z. So, I will pass on the "how long" part of the question. I will add, though, that some groundwater is tens of thousands of years old. There are 12,000 inches per thousand feet. If an aquifer is 3,000 feet below the surface, it is 36,000 inches down. If the aquifer recharges at 1 in/yr, then dividing the distance (36,000) by the speed (the average flow of 1 in/yr) give you the time of travel -> 36,000 years. Again, that is an idealized vertical drainage with no feedback mechanisms and constant flow rate. The situation is more complex than that, but that's how you can think about it. :-)

The problem about rain water catchment is, that it prevents ground water from being formed, thus depleting these ressources and making them unavailable during droughts. Plus, ground water tends to be cleaner than rain water as far as I know - provided there's no fracking or subterranean atomic waste storage around.

Agricultural water is largely Fossil Water, which took tens of thousands of years to accumulate and industrial activities have used it in a century.
Saudi Arabia is abandoning programs to grow wheat that achieved self-sufficiency but depleted the desert kingdom's scarce water supplies. Going from the 6th largest exporter to NO more. Humanity derives water sources from mountain runoff, aquifers or lakes/rivers/ponds.........It must come from sources with much more rapid rain regeneration to be useful. Water has to Percolate into the ground. That takes months or years and the aquifers in question........they've had 10,000 years of water accumulation. Artificial rainfall regeneration, water can be diverted after a storm to be partially filtered and allowed to flow thru gutters, culverts, trenches, etc and flow into retention basins where it'll percolate into dug wells. The venetians used this technique as the city of Venice had no reliable water table to draw from. The water would fall thru dense layers of sand and come thru a cistern. And that was the pinnacle of water catchment technology for a millennia. 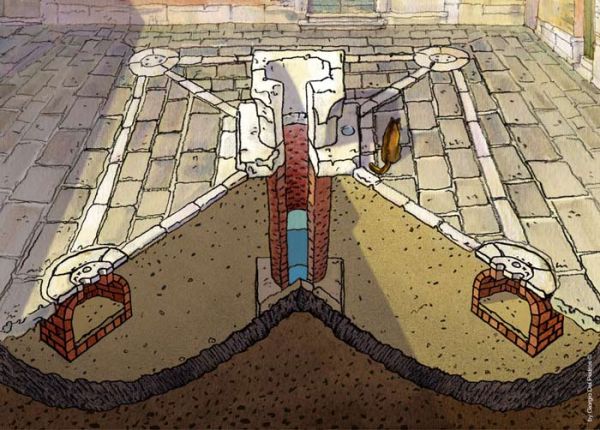 Another is the recharge pit used to regenerate abandoned wells that have been drained by prolonged use. The well's main pipe is dug 10 feet down and several feet out, then the bottom foot of the pipe is drilled to permit water to flow into it. Wrapped in a mesh/protective layer so water can flow but debris and particles cannot. Then the first 3 feet are lined with large rocks/boulders then the next 3 feet lined with smaller rocks and cobble. This is to press against the pit to keep it's inner wall from collapsing in on itself. often the next layer is a permeable filter fabric filled with activated charcoal then lined with course sand and regular fine compacted sand. Redirected rainwater entering the pit will slowly filter into the layers then fill the well. This discharge allows water wells long abandoned to be refilled using the rainy monsoon seasons water to sustain agricultural activity in the hotter dry season.

14
'Peak water' in the Ogallala Aquifer, USA?
3
What is the life-cycle of agricultural water used to grow crops/animals?
6
What would happen if the same soil received waste water contaminants for a long time?
10
Lake Manasarovar v.s. Lake Rakshastal: fresh-water v.s. salt-water
5
Are the water year/hydrological year different around the world?
0
What is the technical term for the amount of water within the surrounding enviornment?
1
Is the maximum human population carrying capacity of Earth higher or lower than the current total human population?