What is this spaceship-shaped cloud?

This tweet from the European Space Agency (ESA)'s Spanish account show a striking photo of a round, flat, "space-ship-shaped" cloud in an otherwise completely clear sky. The stars are out so I assume this is at night, possibly with a Moon.

Could this be real? If so, what kind of cloud is it? and how can it appear out in the open? 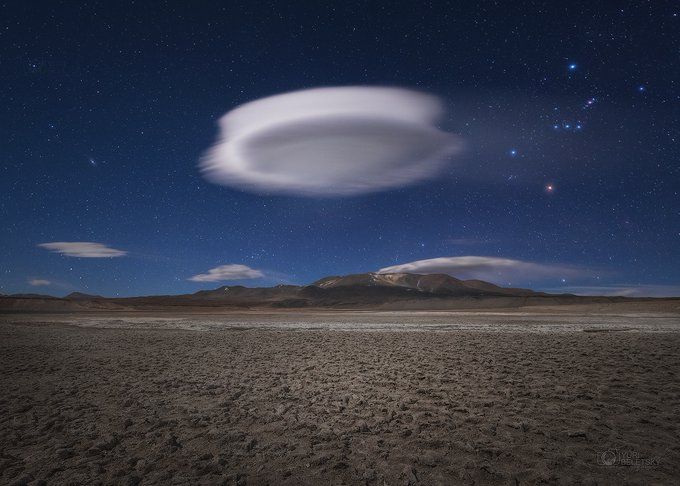 The image shown is a lenticular cloud, a type of cloud often observed around significant topographical features such as the mountain peaks shown in the photo. Depending on the local atmospheric moisture, they can occur on their own (as in this case), apart from other cloud features.

All cloud growth depends on the condensation of water resulting from air being cooled as it is lifted vertically by some forcing mechanism. However, these clouds are an exception to more typical cloud growth, which depends on the atmosphere having a tendency (or instability) for air to continue rising - and thereby condensing more liquid water - once forced upward.

Following the initial source cited above, lenticular clouds form in environments that are stable (i.e., not conducive) to these vertical motions, so upward motion is entirely driven by air forced over an obstacle - in this case, mountain terrain. From a horizontal view, the vertical motion forced by this obstacle commonly takes the form of a persistent wave pattern: 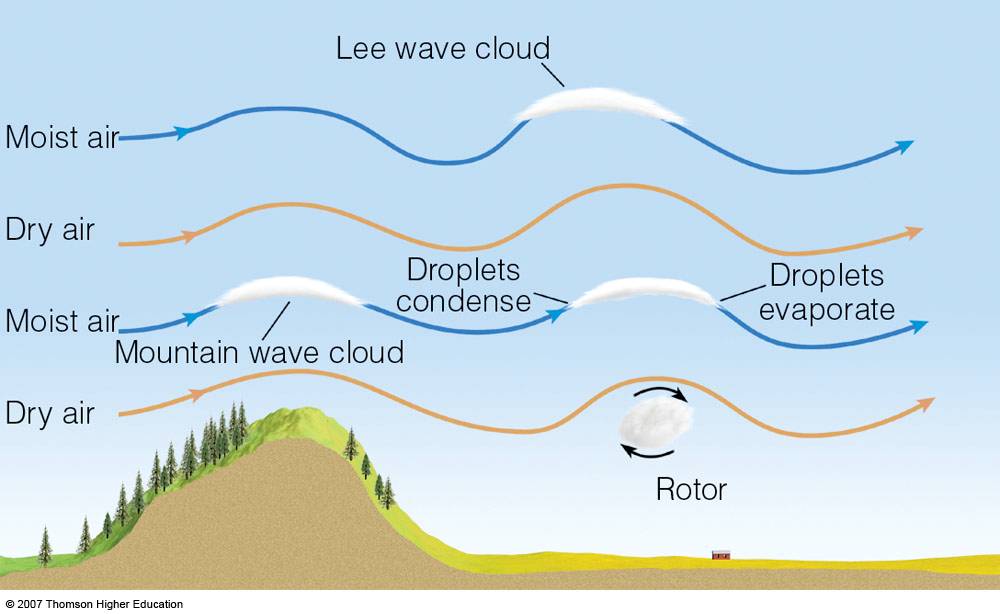 This occurs downwind of the terrain feature, with clouds forming over the portion of the wave featuring upwards vertical motion. This becomes extremely evident when viewing time-lapse videos of this phenomenon.

I just want to add couple more points that are not covered in the excellent answer above by dplmmr. It is the fact that lenticular clouds do not form in the trough part of the wave because that corresponds to air that is warming but they do form in the crest of waves as air parcels condense. How does one obtain the trough and crest of the Mountain wave that produced the lenticular cloud? Well you use a cloud resolving model-Cloud resolving models(these models are typically non hydrostatic) and then plot the streamlines.

Not the answer you're looking for? Browse other questions tagged meteorology clouds orography or ask your own question.

6
Is there a name for these “pouring” clouds?
5
How to predict when contrails are likely to form over a specific location using public data?
4
Why are lenticular clouds circular?