This circular rain pattern was observed in Sydney’s rain radar today. It remained for the entire loop, wiggling around a bit but mostly staying in the same place.

The fact that it’s centred around the radar made me suspect it is some kind of artifact. Is that the case? Or this this real? If it’s real, why would it look like that? 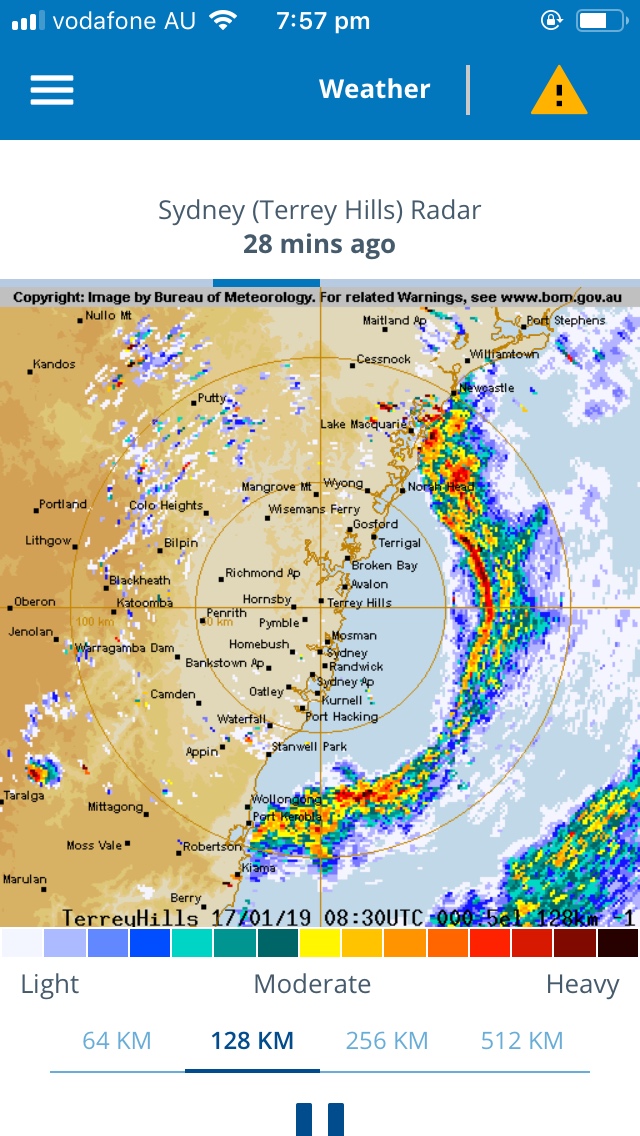 A way to check if those clouds and precipitation are real is to check the same area and time with another radar.

This is the image loop of Sidney (Terrey Hills) radar for the same time (the same you used). It shows the same pattern than your image. In the animated images that arch centered in the radar looks even weirder.

Therefore, since those patterns are different for each radar, I would say that they are artefacts, and that both radars suffered from the same kind of artefacts.

Interestingly, that kind of artifact seems consistent with the situation explained in dplmmr's comment: if both radar were just scanning an individual elevation angle (the same angle for both radars) and precipitation were just in a range of heights, we could expect that kind of pattern.

Not the answer you're looking for? Browse other questions tagged meteorology precipitation radar or ask your own question.

6
Eliminating range folding error in doppler radar returns
10
Explanation for growing circular echo on weather radar?
4
What type of cloud is this?
3
Using Range Height Indicator scan of radar
2
How can I learn to make mesoscale/synoptic analyses of major weather events?
5
Need help understanding rain rate formulas from drop sizes
5
Can I use radar data to estimate snowfall, or is there a better way?
5
Can weather radar be used to track swarms other than mayflies?
6
What are these lines that I frequently see on doppler radar?