Is pollution a contributing factor to freezing rain?

I have been to different places with nearly the same freezing temperatures, around -2°C, but only at some specific places I repetitively experienced freezing rain. One common factor at these places was relatively more air pollution. Could it be that pollution is a contributing factor that causes freezing rain to occur?

If not, what are the main factors that cause freezing rain, and the regions on Earth that often experience them, especially in Europe?

Pollution shouldn't contribute to produce freezing rain. It might have an impact in the precipitation rate and location but not on the likelihood of freezing rain.

Freezing rain requires not only that the near-surface temperature is below freezing, but also that there is a temperature inversion that provides above zero temperature in the atmospheric layers above the surface.

Such condition can melt the snow high in the atmosphere and then the water droplets enter an area near the surface that is below zero and cools them down but not for long enough to freeze solid (something that would produce sleet). Water droplets in such conditions gets below zero but remain liquid, a phenomena called supercooling. When the supercooled drops hit the surface (that is also below zero), they instantly freeze forming a thin layer of ice, hence freezing rain.

This figure from mprnews.org nicely summarize the phenomena: 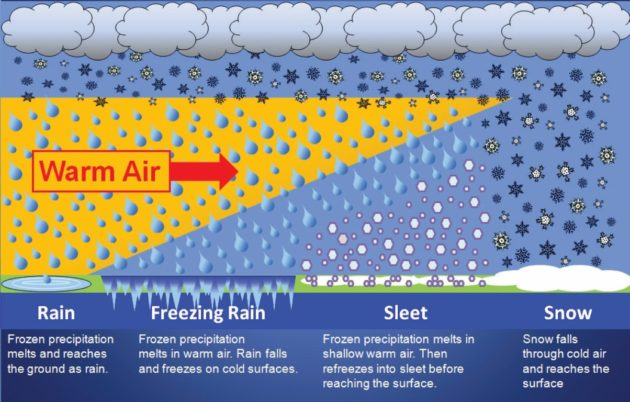 Regarding why some places can be mor suitable for freezing rain, I'll highlight here the comment by @Anirudh pointing to this link that deals with the case of Guizhou Province in China.

Freezing rain starts its journey in the atmosphere as snow. The snow encounters a deep pocket of warm air, melts and becomes rain. The rain then passes through a layer of air close to the surface where the droplets cool to a temperature to just below freezing; however, the droplets don’t actually freeze over. When the “supercooled” raindrops hit the surface, like a road, tree or power line, they immediately freeze and form a thin glaze of ice.

Not the answer you're looking for? Browse other questions tagged meteorology atmosphere climate air-pollution rain or ask your own question.

16
What is the methodology to analyze future climatic extremes using the results of climate models?
3
Quantitative mapping of air pollution Sifakis and Paronis
11
How to tell the difference between real rain and fake rain (cloud seeding)?
3
What is the most optimal latitude on Earth for the generation of extreme maximum temperatures?
3
Why do clouds sometimes form in "plumes"?
5
Cooling the Indian subcontinent using Tibetan Plateau
0
Could increased $\ce{CO2}$ levels be a contributing factor why dinosaurs grew so big?