What kind of lava tube feature is Cleopatra's Grave?

My apologies, as this image is somehow in really bad color, like all the other images from that blog post. (I should really be grateful they got images at all, as this low image quality video provides some idea of the difficulty of reaching the location, which requires crawling through at least eight feet of one-foot-high passage and lots of three-foot-high passage, and the ceiling directly above it is about two feet high, so I can't complain about the quality!)

I saw it with my own eyes. Cleopatra's grave is an oblong feature on the floor of Catacombs Cave (lava tube) about three feet long and two feet wide and rimmed by apparently normal cave floor that raises up about an inch or so above the surrounding floor. Cleopatra's grave is composed of rock of a light grey color as opposed to the dark grey and slightly brown-tinged floor around it. It looks very smooth (I didn't touch it because of its historic paint) and it exhibits circular fractures running two complete rings around its outer edge. It is trivially identified by the rather recent red paint serving to mark the locations of the historic yellow paint applied by J.D. Howard himself calling it by name.

The surface has no visible crystals, and if I didn't know it was natural I'd have thought on seeing it that somebody had mixed up some really fine grout (think cement) and poured it. Furthermore, the surface exhibits no specular reflection and almost perfectly uniform matte reflection.

But what is it? Some kind of lava upwelling? A rafted block of unusual shape? Something else?

This is a locally-well-known feature that I'm hoping somebody here actually knows the answer to. But there is simply not another way of getting at it -- there's no way I'm going to test its hardness or otherwise risk damage to so much as the paint on it.

It's just average ropy lava called pahoehoe by geologists. It's similar to dough so it easily forms ropes like the ones around the side and bulbs like the central area which is similar to a pillow except that it's called a toe.

The colder black lava flows like ropes and the hotter red lava is smooth. 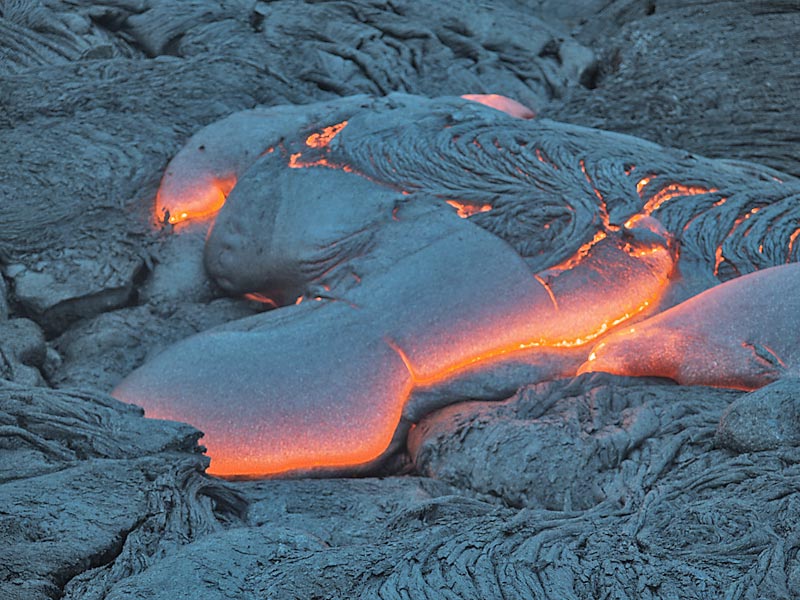 This is also from Cleopatra probably: https://media.gettyimages.com/photos/ropey-lava-from-volcanic-eruption-picture-id200432059-001

Another good image of a toe: 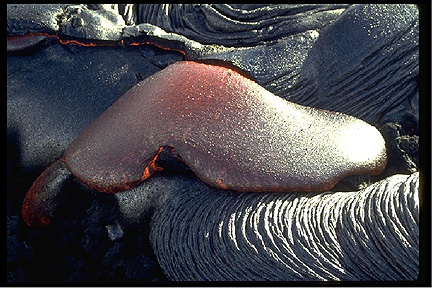 Not the answer you're looking for? Browse other questions tagged geology volcanology cavern or ask your own question.

11
What geological processes affect the speed of Kilauea lava flows?
4
What causes lava eruptions (and shutoffs)?
9
What conditions could produce 50 km long lava tubes?
3
How vertically deep do lava conduits go?
15
Did the Geothermal Power Plant contribute to Pahoa's Lava Fissures?
1
Are there lava flows inside a volcano?
2
Why exactly is the feature on Io called a volcano, and the feature on Enceladus called a geyser?
1
Sink holes in drainage area
6
Geomorphological feature identification
5
How does one get a steep-sided stratovolcano with extremely fluid, low-viscosity lava?