Would oceans regenerate if removed?

On Earth, there is enough Hydrogen and Oxygen to make 13,88 million km$^3$ of water (calculation below). However, oceans contain only a tenth of that.

Clearly, most of the hydrogen must be stored in other chemical compounds different to water. Or, as water deep within Earth's interior: some studies suggest the water on Earth's interior could contain three times as much as the water near the surface.

On the other hand there are many chemical reactions, like the well known photosynthesis and respiration, that can transform water into other compounds and vice versa.

We often think that there is a fixed amount of liquid water on Earth (plus or minus what is being recycled in the atmosphere). But it seems to me that the processes above could change the water amount significantly over geological timescales.

So my question could be stated as follows: over geological timescales, what determines the amount of liquid water on Earth?

Here are two examples of the processes I'm thinking about:

(This question was inspired by How much water is the atmosphere losing to space?)

Calculation of the maximum possible water on Earth

The maximum amount of water you can have on Earth is limited by the available hydrogen. Now, for each gram of bulk Earth there are 260 $\mu\text{g}$ of hydrogen and plenty of Oxygen.

I'm ignorant of all the organic and inorganic chemical reactions that can destroy or create water, and the factors controlling them. But I can give a shot to the part of the question related to volcanoes and the water stored on Earth's interior:

The most abundant gas in volcanic eruptions is water, corresponding to more than the 80% of emitted gases in volume (source). If we consider on of the largest volcanic eruptions we know about: The toba supervolcano eruption 75,000 years ago. The water volume emitted has been estimated in $540\, \text{km}^3$. 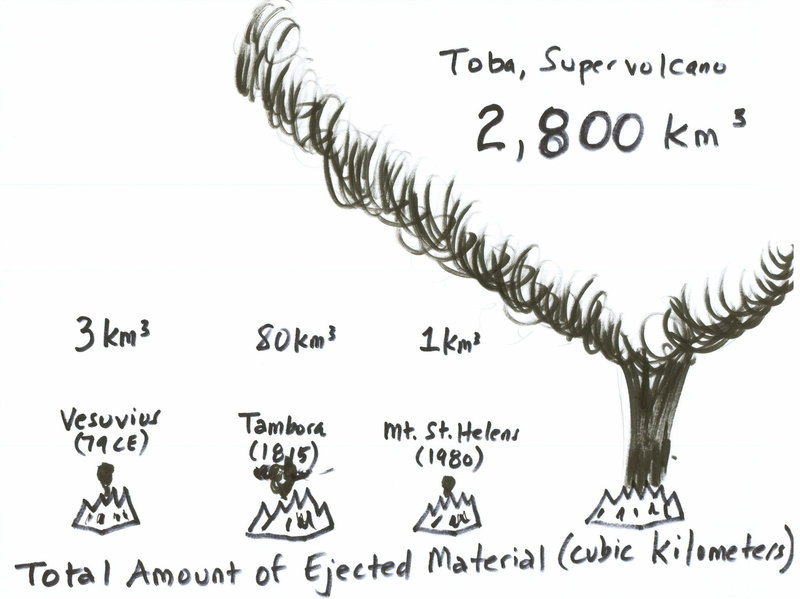 From that perspective, you can see that you would need about 2.5 million Toba eruptions to re-fill the oceans.

In the past, over the history of Earth it could be reasonable to think that the volcanic output could average to the equivalent one Toba eruption every 2000 years, something that would be enough to deliver the volume of water currently in the oceans, but over 4.5 billion years.

However, most volcanic activity on Earth is related to subduction volcanism (including Toba), and such volcanism relies on water input to produce the erupting magmas, and arguably, a large fraction of the erupted water is the same water that was lost in the corresponding subduction zone.

We can then conclude that volcanic water input could eventually help keeping the level on a drying ocean, but at a very slow rate and over very long timescales. But if the oceans ever go dry, volcanism is unlikely to revert the situation.

In the context of the question that motivated this one, the rate at which volcanoes release water dwarf that of water losses to space. However, over long enough times those losses could dry our both the ocean and the Earth interior. But more importantly, I don't know if the net transfer of water from/to the Earth's interior is zero (in balance) or if the mantle is actually sucking water from the oceans, or filling them up. It might be that instead of worrying of planets loosing their water to space, we should worry about them loosing it to their guts.

Reactions that can produce or destroy water:

Photosynthesis and respiration only exchange water for organic compounds and vice versa, those reactions can not alter the amount of water in the earth, only convert a small part into organic compounds.

Not the answer you're looking for? Browse other questions tagged geology geophysics oceanography geochemistry water or ask your own question.

14
How much water is the atmosphere losing to space?

19
What are the physical upper bounds on the magnitude of an earthquake?
19
Why does sea level correspond to boundary between oceanic and continental crust?
6
Is the giant impact hypothesis still alive?
8
What "g" would be needed to keep helium on Earth?
7
Abiogenesis: Formation of Lipids from Montmorillonite
5
Relationship Between Ratio of Atmospheric Gases and Ocean Gases
6
Why should there not be water deep (e.g. below 6 kms) in the Earth's crust?
5
How cold would the Earth have to be for the oceans to freeze entirely?
4
How did hydrogen make its way into proto-Earth?