Which percentage of $\text{CO}_2$ emissions are human made emissions?

I was watching a science/myth Youtube channel (science mixed with a lot of speculative/fantasy content) with 2M+ followers and the Youtuber said volcano made emissions were higher than human made emissions. Now, I thought this was wrong and apparently some figures I saw in articles showed this was wrong, but then, I found this article

Although our output of 29 gigatons of CO2 is tiny compared to the 750 gigatons moving through the carbon cycle each year, it adds up because the land and ocean cannot absorb all of the extra CO2.

First of all, the amount of carbon cycling trough the Earth's system is irrelevant to the discussion of the changes in atmospheric $\text{CO}_2$ concentration or ocean acidification. In the same way that the volume of water cycled by the filtering system of a swimming pool is irrelevant to the level of the pool. What matters are the net inputs and outputs of water.

Let's look at this diagram of the Earth's carbon storage and fluxes through the carbon cycle. 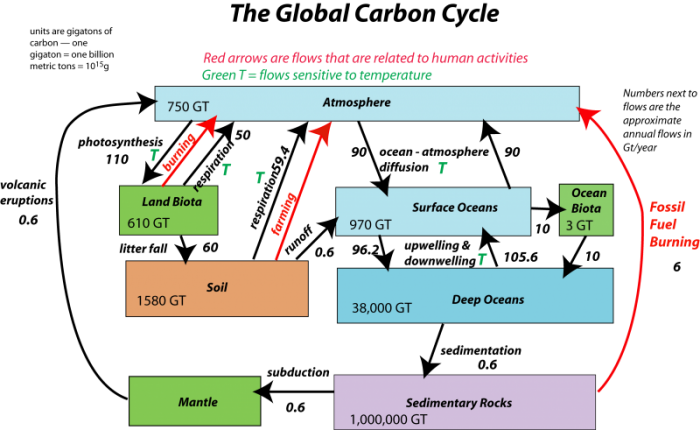 The total amount of carbon is indeed huge, and the total fluxes add up to almost 700 Gigatons of carbon per year. Note that only ~400 Gt are transferred as $\text{CO}_2$, the rest is organic matter.

The number in the diagram are not precise, but they are very good approximations. The figure given in the diagram for humans burning fossil fules is 6 Gt of carbon, that corresponds to 22 Gt of $\text{CO}_2$, which added to other human made emissions probably add up to something similar to the 29 Gt of the reference you cited.

So you can argue that natural emissions are larger than human emissions. Sure. The respiration of plants and animals produce 8 times more $\text{CO}_2$ than humans, but plants take it back through photosynthesis.

Atmospheric $\text{CO}_2$ have varied widely through Earth's history, but in the last several thousands years it have been pretty stable, because all the sources were in balance with the sinks, leading to a very small net change in $\text{CO}_2$ concentration in the atmosphere and oceans (there in the form of carbonic acid).

However, this balance was disrupted by the industrial revolution and human emissions, mostly due to the use of fossil fuels.

Going back to the swimming pool analogy: evaporation might be tiny compared with the volume of water turned around by the filtering system, but give it long enough time and your swimming pool will be dry.

We added a source of carbon in the carbon cycle, and if we don't remove it or add an equivalent sink (carbon sequestration), the concentration of $\text{CO}_2$ in the atmosphere and carbonic acid in the oceans will keep rising.

Returning to your question, using the figures in the diagram, human emissions would account for ~3% of total emissions. But that doesn't matter at all. The point is that human emissions are the ones upsetting a system that was in balance, and are triggering an increase in atmospheric $\text{CO}_2$ concentrations and consequent ocean acidification.

Not the answer you're looking for? Browse other questions tagged climate-change climate volcanology co2 carbon-cycle or ask your own question.

14
What is a reasonable forecast of sea level in 2100?
6
Are all natural diamonds made of organic carbon material?
22
"Five of the Solomon Islands disappeared" due to sea level rise, how is this possible so quickly?
2
Trying to calculate the percentage of carbon emissions that is offset by 45,000 acres?
5
What are the technical solutions to measure $\ce{CO2}$ emissions?
4
Is there consensus amongst climatologists that cold weather extremes are caused by global warming or human influence?
0
Which are the mechanisms of the correlation between atmospheric carbon dioxid and global warming/cooling?
1
USA and UK government report on plane emissions: 200% difference... which is right?
4
Are small reductions in CO2 emissions better than no reductions, in terms of mitigating climate change?