What are the ranges of natural (or pre-industrial era) levels of CO2 in the atmosphere in ppm and tons?

There is no such thing as a single "natural" level of $CO_2$: In Earth's history, there have been levels much higher and much lower than currently, and they are all natural.

What we should consider instead is what levels of $CO_2$ are compatible with the mild and stable climate that humanity has enjoyed for the last few millennia, or conversely, which levels will upset the climatic equilibrium and send Earth into a completely new climatic regime.

The means to measure atmospheric $CO_2$ concentrations were invented during the industrial revolution, so we don't have direct records before that. However, we can reconstruct past $CO_2$ concentrations using proxies such as the analysis of air bubbles trapped deep within the ice in Antarctica.

Ice cores were drilled up to ~600 meters deep between 1987 to 1993 at Law Dome (Antarctica), allowing the reconstruction of $CO_2$ concentrations from the last millennium, and it looks like this:

Where the darker blue at the end corresponds to the direct instrumental record (source).

Later, another ice core from Vostok station in Antarctica was drilled to a depth of more than 3.6 km, allowing the reconstruction of atmospheric $CO_2$ concentration during the last 400,000 years, and it looks like this: 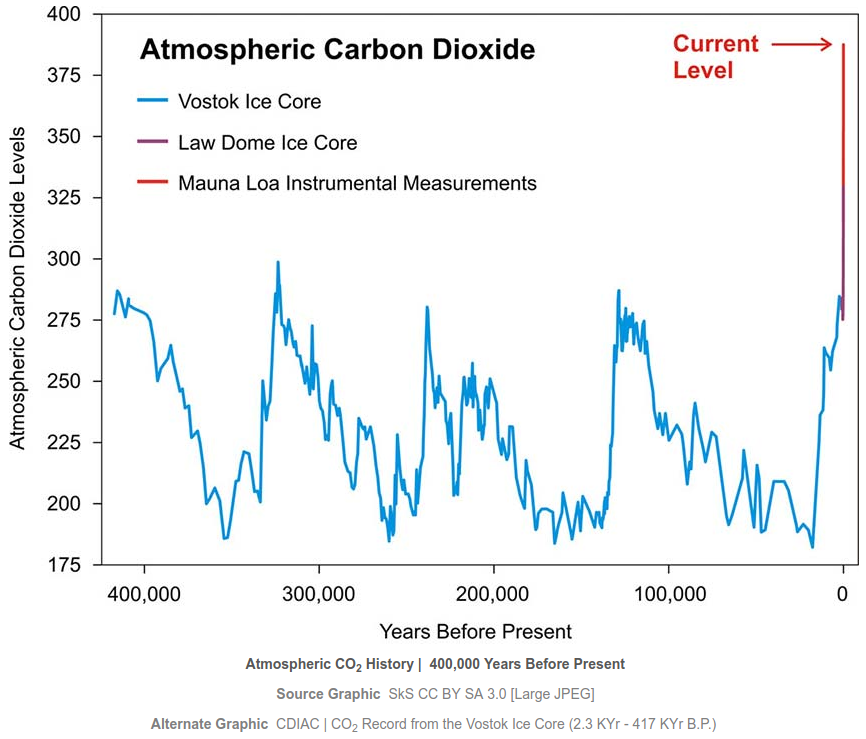 The data from Law Dome and that of modern records at Mauna Loa, Hawaii are also displayed on the end for comparison.

More ice cores have been drilled after Vostok, and all of them tell more or less the same story.

So we know that atmospheric $CO_2$ concentrations now are much higher than at any other time since we invented agriculture. And the people that think they know how the atmosphere works run models and say that current levels will significantly upset the climate as we know it. On the other hand, the people who don't know how the atmosphere works (like me), should just stop producing so much $CO_2$, because we don't ourselves know what the effects could be, and at the same time, we rely on the climate to stay nice and stable to keep your flourishing society alive.

Not the answer you're looking for? Browse other questions tagged climate-change climate paleoclimatology co2 deforestation or ask your own question.

57
How many trees would I have to plant to solve Global Warming?
6
How much of Earth's forested land is currently protected from logging/deforestation?
7
How large can local surface CO2 concentration vary due to natural processes?
1
Does extrapolating current CO2 trends indicate 7632 PPM CO2 and 14C temperature anomaly within 200 years?
3
In the 800 kyr $\ce{CO_2}$ record, how detectable would a short-term peak be?
9
What caused peak CO2 to rise, starting about 400,000 years ago?
0
Could increased $\ce{CO2}$ levels be a contributing factor why dinosaurs grew so big?