The Tambora eruption caused the "Year without a summer". How much would such an eruption today affect the output of solar pv on a global scale?

Are there any estimates for the reduction of global solar insolation at the Earth's surface that a Tambora scale eruption would bring?

If our electrical power generation became heavily reliant on solar pv would it bring about a substantial reduction in output capacity?

Volcanic eruptions effectively inject large quantities of aerosols in the upper layers of the atmosphere, increasing Earth's albedo and reducing the intensity of the solar radiation reaching the surface. Such reduction would indeed lower the solar energy available to solar panels.

These effects of volcanic eruptions have been studied by Gao et al. (2008) and Crowley and Unterman (2013). Both studies were combined by the IPCC Working Group I during the assessment report 5 (2013), and summarized on the figure 8.18 (Chapter 8), together with other climatic forcings: 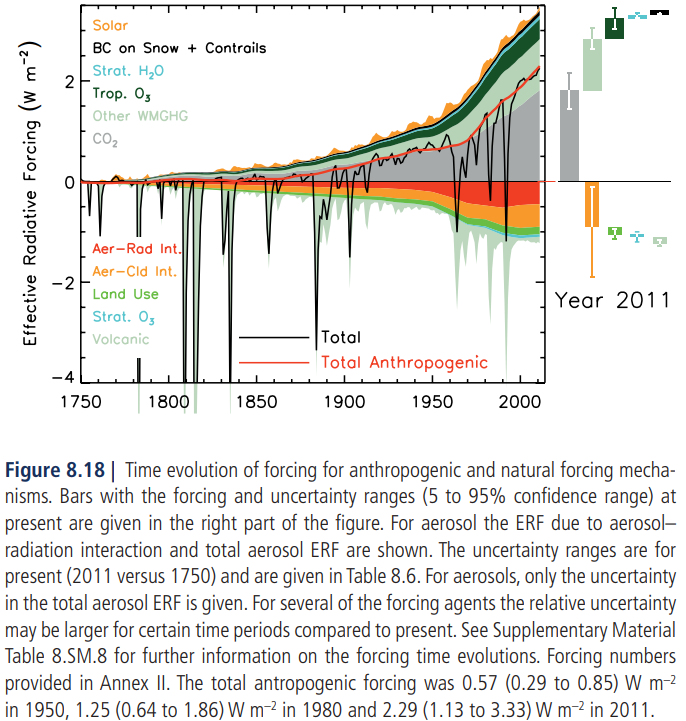 You can see that the largest drop in effective radiative forcing happens in 1815 as a consequence of the Tambora eruption.

Unfortunately, that event goes out the scale of the plot. However, the data is available on Table AII.1.2 of Annex II, were we can see that the minimum value indeed happens in 1815 and reaches –11.629 W/m².

Considering the typical amount of energy received from the Sun under clear skies at seal level is roughly 1,000 W/m², the irradiation drop produced by Tambora would represent a drop of about 1% on the energy reaching the Earth's surface. Of course, much larger local effects could be observed due to transient and more localized dense ash clouds.

Therefore, at a global scale, if a new "year without summer" where to happen, photovoltaic energy output would drop by ~1%.

Of course, larger effects would take place if the eruption happens to be close to the most important areas for photovoltaic energy production.

Not the answer you're looking for? Browse other questions tagged atmosphere climate volcanology or ask your own question.

43
(How long) would Earth's atmosphere last without a global magnetic field?
21
Significant difference between averaged wind speeds and averaged wind power density, for wind generation modelling?
19
Simple Climate Models that Predict Climate Change
7
Would a global cooling event disable solar energy usage?
7
How can we calculate the temperature of the atmosphere, including the greenhouse effect?
4
Were there any plans or proposals for "unilateral geoengineering deployments" before this paper was publsihed?
11
Would a volcanic winter trigger an oceanic "spring"?
2
Are there resources for determining what percentage of the earth's surface is occupied by air conditioned spaces?
13
Does the magnetic field really protect Earth from anything?
1
How much did the worst volcanic eruption in human history affect global temperature?