Why do climate experts from the UN/IPCC rarely mention Grand Solar Minimum?

I've read many papers about Grand Solar Minimums and Glassberg Minimums, known to science for a very long time, and studied and monitored with many public funds. History shows solar activity is the main driver of our climate, and additional contributors like orbital parameters and geomagnetic field intensity are also still connected to how much energy the Earth gets from the Sun.

The present trend towards a Grand Solar Minimum was predicted since the '70s and we already see signs of it in solar activity and in our climate, yet it seems to have consistently been ignored by climate experts, by our governments, and by the media. Why is this the case?

(Some pertinent studies regarding such Minimums include the iconic paper J.A.Eddy, 1976: The Maunder Minimum and this 2014 paper by Valentina Zharkova on predicting the next solar cycles, among many others.)

The IPCC do mentions solar minimums and maximums, as part of extremely careful treatment they do of the reconstructions and predictions for the changes in solar irradiance. The Assessment Report 5, Working Group 1, Chapter 8, have a whole section (~4 pages) dealing with solar irradiances.

If the IPCC don't mention grand solar maximums/minumums that often, is because the research in the area have shown that solar minimums and maximums have smaller impact in climate than other factors. Therefore, such factors deserve more attention, like Greenhouse gases or land use changes. These factors deserve more attention both because they have a greater impact on climate and because we can do something about them. When it comes to solar activity we can't do much anyway.

The work of the IPCC is to combine the research of the whole scientific community, their conclusions are not based in the result of a single study but in the combination of pretty much all of them. Some studies could be contradictory, so instead of cherry-picking what suits them, they compare and combine all the studies to have the most reliable answers and a good idea of the uncertainties. If predictions of multiple models differ a lot it means uncertainties are large. If they all give the same result, we can be a bit more confident about it.

For example, the figure 8.11 compares the reconstruction of solar irradiance between years 1750 and 2000 from six studies: 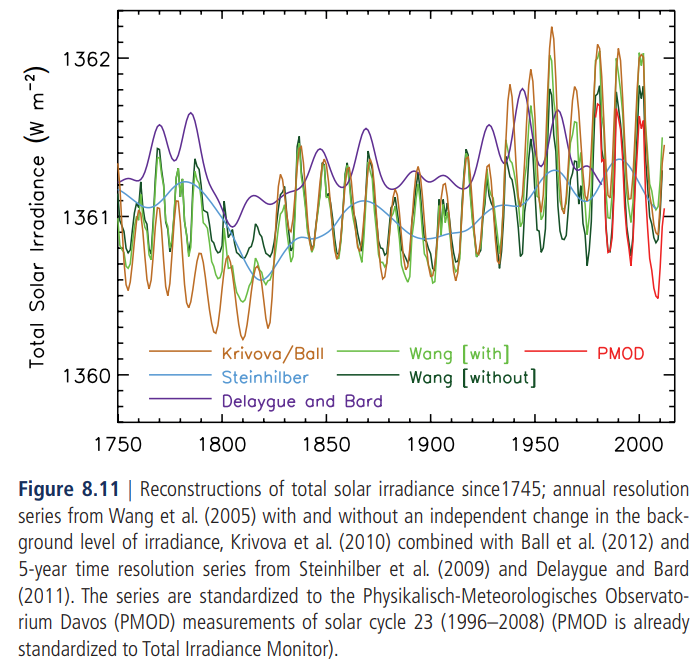 Here some excerpts from the IPCC reports that are relevant to this question, and where solar minimums are mention and considered in the wider context of climatic forcing (text between square brackets were added by me for clarification):

Satellite observations of total solar irradiance (TSI) changes from 1978 to 2011 show that the most recent solar cycle minimum was lower than the prior two. This very likely led to a small negative RF [Radiative Forcing] of –0.04 (–0.08 to 0.00) W m$^{–2}$ between 1986 and 2008. The best estimate of RF due to TSI changes representative for the 1750 to 2011 period is 0.05 (to 0.10) W m$^{–2}$. This is substantially smaller than the AR4 estimate due to the addition of the latest solar cycle and inconsistencies in how solar RF has been estimated in earlier IPCC assessments. There is very low confidence concerning future solar forcing estimates, but there is high confidence that the TSI RF variations will be much smaller than the projected increased forcing due to GHG during the forthcoming decades. {8.4.1, Figures 8.10, 8.11}

Cosmogenic isotope and sunspot data (Rigozo et al., 2001; Solanki and Krivova, 2004; Abreu et al., 2008) reveal that currently the Sun is in a grand activity maximum [a.k.a. grand solar maximum] that began about 1920 (20th century grand maximum). However, SC [solar cycle] 23 showed an activity decline not previously seen in the satellite era (McComas et al., 2008; Smith and Balogh, 2008; Russell et al., 2010). Most current estimations suggest that the forthcoming solar cycles will have lower TSI [Total Solar Irradiation] than those for the past 30 years (Abreu et al., 2008; Lockwood et al., 2009; Rigozo et al., 2010; Russell et al., 2010). Also there are indications that the mean magnetic field in sunspots may be diminishing on decadal level. A linear expansion of the current trend may indicate that of the order of half the sunspot activity may disappear by about 2015 (Penn and Livingston, 2006). These studies only suggest that the Sun may have left the 20th century grand [solar] maximum and not that it is entering another grand [solar] minimum. But other works propose a grand [solar] minimum during the 21st century, estimating an RF within a range of -0.16 to 0.12 W m$^{–2}$ between this future minimum and the present-day TSI (Jones et al., 2012). However, much more evidence is needed and at present there is very low confidence concerning future solar forcing estimates.

Nevertheless, even if there is such decrease in the solar activity, there is a high confidence that the TSI RF variations will be much smaller in magnitude than the projected increased forcing due to GHG (see Section 12.3.1).

Summarizing, the IPCC consider solar irradiance variations, the timing of solar minimums and maximums. However, it consider also many other factors that also affect Earth's energy budget. Then, they do predictions based on the combined effect of all these factors. In contrast, some people tend to focus on just one factor (as solar activity) and erroneously assume that it will dominate over all the others.

For the particular case of solar activity, as you can see in the cites above. The IPCC acknowledge the possible occurrence of a solar minimum in the future, but combining all the models they conclude that there is a high confidence that its effects will be much smaller in magnitude than the projected increased forcing due greenhouse gases.

Part of the reason your question might not be well received is because it starts from an assumption that is false: "climate experts from the UN/IPCC never mention Grand Solar Minimum". They do mention it, and if you follow the references in the IPCC you will find plenty of discussion about Dalton, Maunder and older Grand Solar Minimums. And part of that discussion is to estimate the real impact that those events can have in Earth's climate. Then the IPCC get those estimates and figure out how they interplay with the many other factors that conjugate to determine current and future Earth's climate.

I think the main question has already been answered. But I would like to add to the fallacy that:

History shows solar activity is the main driver of our climate, among other factors.

The Sun is undoubtedly the main source of energy for the planet and its climate. However, variations in solar activity are not the main cause of variations in climate. The main drivers are the "other factors".

Some examples of that are:

Faint young Sun paradox: The climate on earth has remained in the range that allows the existence of liquid water during billions of years despite large changes in the luminosity of the sun.

Milankovitch cycles: The cycles that control the ice ages that have dominated the planet during the last million years are not due to changes in solar activity, but to changes in the orbit and orientation of the Earth.

Not the answer you're looking for? Browse other questions tagged climate-change paleoclimatology solar-terrestrial-physics or ask your own question.

-5
Is there any correlation between Grand Solar Minimums (GSM) and earthquakes?

20
What is the 'natural variation' in global temperature that climate-change skeptics mention?
3
What evidence is backing the claim that the CO₂ we're releasing in the atmosphere is the main cause of climate change?
1
What would a graph of magnitude >7.5 earthquakes over last 400 years compared to Grand Solar Minimums look like?
13
Does the magnetic field really protect Earth from anything?
2
Why rely on climate models as opposed to paleoclimate data?
10
With so many positive feedbacks accelerating global warming, how did the earth ever re-enter ice ages after it came out of one?