How would steam refract light compared to fog and how would the rainbow appear? Does the temperature of the water drop or ice crystal effect the rainbow in any way?

I know the size of the water drop and the shape of ice crystals affects the rainbow. Does the temperature within those 2 forms of water effects light refraction?

Could impurities or composition of the raindrop or ice also effect light refraction?

Related: How to tell if fog is made out of water droplets or ice crystals?

Short answer: the refraction of light is ultimately dependent on both temperature and exact composition of the medium (e.g., liquid water or ice) through which it passes. Note: strictly speaking, "steam" typically refers to water vapor at temperatures above the boiling point, but in casual usage (and for the purposes of this answer) it is commonly used to describe condensed water droplets occurring in such environments.

For background, rainbows, and refraction of light in general, occur as light passes between different media (in this case, air and liquid or frozen water) in which the speed of light differs. This property is described by the refractive index, the ratio of the speed of light in a vacuum to its speed passing through a particular medium. A generalized example of refraction as a ray of light passes between media with differing refractive indices is shown here: 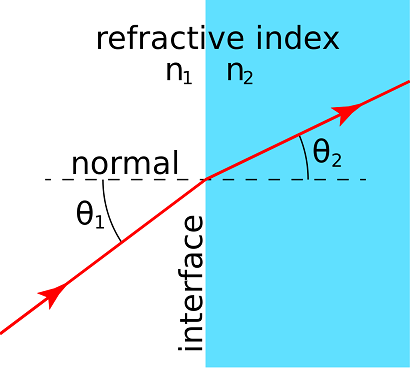 More specifically, however, the amount of refraction depends on both the properties of the medium itself and on the frequency/wavelength of the light itself. For the example of a rainbow, the color pattern is produced by the slight variations in refraction over the range of visible wavelengths for liquid droplets occurring in generally similar environmental conditions: 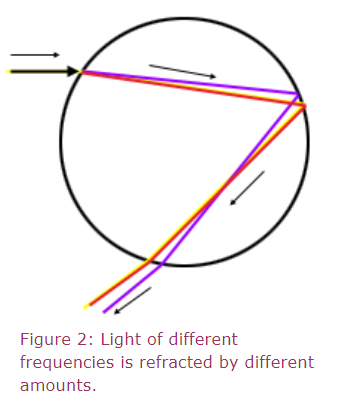 Historically, the refractive index has been derived for a large number of media including air, ice, and both pure liquid water and various liquid water solutions at a variety of temperatures, all with respect to specific wavelengths of light. Thus, the differing refractive indices therein show that both the temperature and the composition (including any impurities) of liquid water or ice will indeed affect how light is refracted through them. Any more specific details related to the resulting effects would naturally depend on knowing the exact characteristics in question - one particular example, noted below by Keith McClary, is that the larger index of refraction for salt water causes a slightly smaller radius in the resulting rainbow.

Specifically for pure liquid water, while the characteristics of ice crystals and the effects of changing composition are likely too specific to estimate, water's refractive properties may be reasonably estimated over a range of temperatures. For example, Bashkatov and Genina (2002) present in their Table 1 examples of refractive indices for pure liquid water at temperatures between 0 and 100°C and for a range of wavelengths encompassing the visible light spectrum:

As shown, the differences in refractive index are relatively small even over this range of temperatures, and the relative differences over the visible wavelengths are similar for a given temperature, suggesting that a typical rainbow may well be observed in association with water droplets condensing from steam at high temperatures.

Not the answer you're looking for? Browse other questions tagged meteorology temperature rain visualization field-measurements or ask your own question.

8
How does the amount of mass in an atmosphere affect the seasonal changes and dynamics of the planet's climate?
3
Why do clouds have areas of darkness instead of scattering light to produce a rainbow?
7
What causes a rainbow, its colours and its shape?
7
How can we calculate the temperature of the atmosphere, including the greenhouse effect?
13
How to tell if fog is made out of water droplets or ice crystals?