Which mountains (or hills) are visible from both Boston and Rhode Island?

In the description of the Norse exploration of America, there are two places mentioned, "Hop" and "Straumfjord", with some relationship to the same mountains.

They concluded that the mountains of Hop, and those which they had now found, formed one chain, and this appeared to be so because they were about an equal distance removed from Streamfirth, in either direction.

According to the interpretation by Kåre Prytz these places are Boston, Massachusetts (Straumfjord) and Rhode Island (Hop), and the meaning of the text is that (1) the three locations (Boston, R.I., the mountains) form an equilateral triangle, and (2) the mountains are visible from both Boston and R.I.

Casual inspection of a map suggests this might well be accurate, but I am wondering if the exact peaks can be pinned down more specificly?

To answer the question I'll use the SRTM Digital Elevation Model at 30 meters resolution, and pick the following five mountains or hills that seem good candidates: 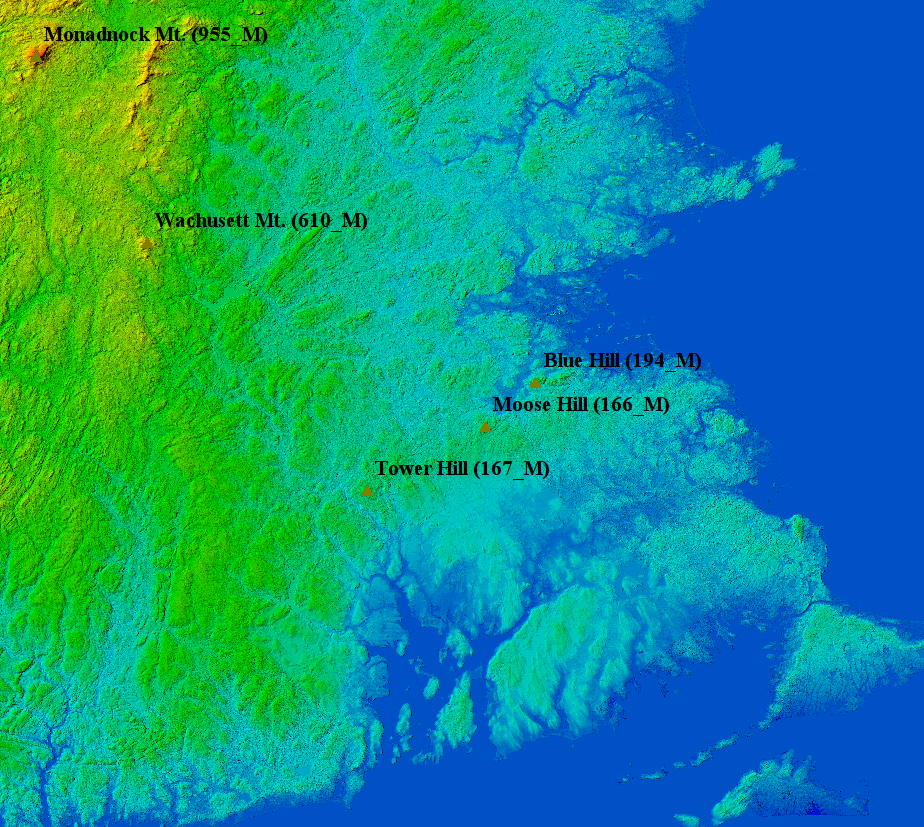 Shown elevations are the ones derived from STRM data. From each of these points I've made a view shed analysis. And for easier comparison I've put them together in the following animation:

In these view shed analysis, the areas in read represent the one that would be visible from the corresponding mountain or hill. As you can see, Blue Hill and Moose hill are visible from some parts of Boston and Rhode Island. So that chain of hills (including Tower Hill) is definitely visible from many parts of both areas.

For the mountains further inland as Wachusett Mt. and Monadnock Mt., they don't seem to be visible from the coastal areas of Rhode Island.

Not the answer you're looking for? Browse other questions tagged geography mountains gis or ask your own question.

10
What is a massif and what differentiates it from other types of mountains?
5
How are small mountains created?
3
Which mountains are rising?
8
Why are South African mountains short and flat?
6
Why are parts of the Atlas Mountains in Morocco flat?
4
How are 'road-like passages' between Himalayan mountains formed?
3
How Old Are the Verkhoyansk Mountains in Northeastern Russia?
5
Could the speed in which the plate is moving affect how quickly mountains rise?