What is the CO2 concentration by altitude and why?

Here is a measurement of CO2 concentration by altitude measured by aircraft:
(from Pulsed airborne lidar measurements of atmospheric CO2 column absorption)

Is this the usual vertical structure of CO2? Why is it at a higher concentration close to the surface and then uniform at a certain point?

The volume of carbon dioxide in the atmospheric column becomes uniform at altitude because the sources and sinks for CO2 are generally at ground level and, as it rises, CO2 becomes well-mixed into the atmosphere.

This is why, for example, David Keeling began the measurements for what would become known as the Keeling Curve at a station 3.3 kilometers above ground level at Mauna Loa.

At ground level, CO2 levels will be heavily influenced by local and seasonal sources such as forests, grasslands, and human activity. That is, if you have a city or industrial area, CO2 emissions will be high due to the burning of fossil fuels. In the case of nature, forests and grasslands will absorb CO2 during the local spring and summer when they grow and emit CO2 in fall and winter as they decompose. (Seen in the annual wiggles in the generally rising Keeling Curve.) 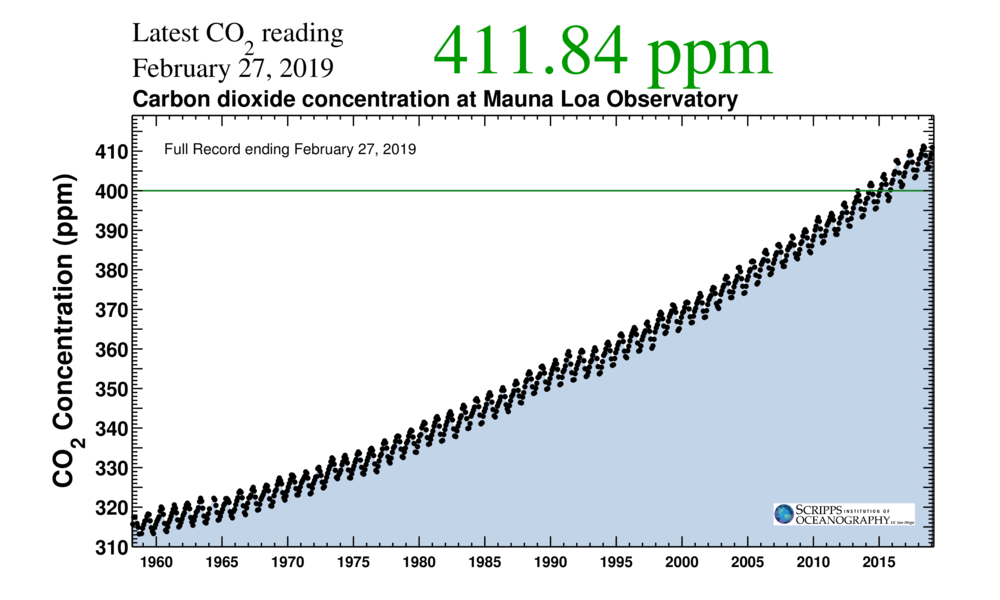 The specifics will vary by location. In the case of your graph, this late-fall test proofing lidar against balloon measurements over Oklahoma on Dec. 7, 2008 shows CO2 at about 395 ppm at about a half a kilometer, declining with altitude so that at about 3.3km, the measurement is around 385-386ppm.

Not the answer you're looking for? Browse other questions tagged atmosphere co2 or ask your own question.