Is weathering of rock a primary means of $\text{CO}_2$ scrubbing on primordial Earth?

I read somewhere that the reason Venus has a runaway greenhouse effect and Earth doesn't is because Venus failed to develop tectonic plates and instead formed a full tectonic plate enveloping the entire planet. And as such, Venus cannot scrub $\mathrm{CO}_2$ from its atmosphere by burying the weathered rock back into the mantle while Earth can, which eventually caused a positive feedback loop of high temperature softening plate preventing fracture which prevents burying of $\mathrm{CO}_2$, which puts more $\mathrm{CO}_2$ in the atmosphere, which raises the temperature even more. Regardless of the truthfulness of this theory, is the weathering of rock a primary mechanism of $\mathrm{CO}_2$ scrubbing on red-hot primordial Earth long before life occurred?

NO, it's not a very major sink on our planet, red is the extra carbon from human activities: https://jancovici.com/en/climate-change/ghg-and-carbon-cycle/wont-the-carbon-sinks-absorb-the-extra-co2/ 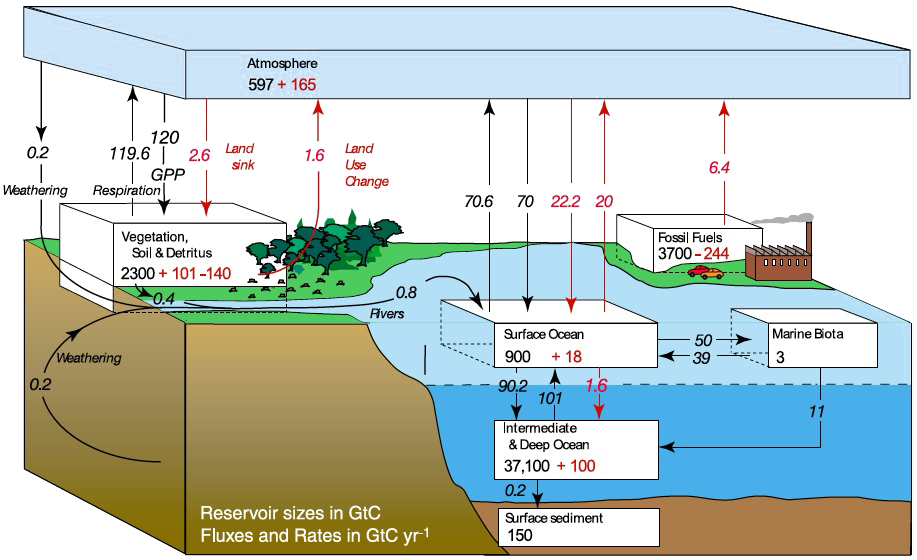 Cool theory about Venus. It lacks a strong magnetosphere, so the solar wind carries away more light elements like hydrogen, and water vapor, the solar wind has carried away all the seas of venus since about 2 billion years ago, probably aided by the sun being 30% bigger and hotter there.

So, if Venus had kept it's CO2 levels in check, it would probably have sunk them in limestone, and also weathering if there was tectonic activity. Weathering does account for 0.2 to 1 gigaton of CO2 sink every year, compared to 30 gigatons released every year from fossil fuels.

The primary store of carbon in the earth's surface is in limestone, comprising about 60,000,000 gigatons of carbon, and coal and oil. the total amount of carbon near the surface of the earth is source 120 million GtC. Life exists on our planet since about 3.8 billion years, so it could have survived in Venusian oceans until about 2 billion years ago. That's the same time that the first major limestone layers appear on earth about 2.4-2.8 billion years ago. https://www.skepticalscience.com/weathering.html#significance

The Role of Plate Tectonic-Climate Coupling and Exposed Land Area in the Development of Habitable Climates on Rocky Planets cites a few references for the global carbon cycle model.

The diagram on page 8 seems to imply that subduction is the only sink.

Not the answer you're looking for? Browse other questions tagged geochemistry atmospheric-chemistry or ask your own question.