Time standard for IERS Bulletin A

IERS Bulletin A and Bulletin B contains Earth orientation parameters. These include the time difference between UT1 and UTC and pole position. The values for these parameters are listed once per day, keyed by "MJD" (Modified Julian Date).

The documentation does not say which time scale these MJD values reference. Without qualification, MJD is typically taken to mean some flavor of Universal Time. If that is the case, which flavor of universal time is it: UTC, UT1, or some other flavor? If that's not the case, which is it?

I'm using the data in an interpolative fashion (Lagrange interpolation) to estimate the Earth orientation parameters at arbitrary points in time, so not having the correct time standard will lead to small errors in the interpolated values.

The Julian Day (JD) is just a consistent day count since the beginning of the Julian period, that is January 12th 4713 BC. As the numbers tend to be large (today is day 2,458,557.5), in the 80's and motivated by computer memory limitations, the reduced JD was created which is just $JD-2400000$. Then, to remove the annoyance that the Julian Day starts at midday instead of midnight, the Modified JD (MDJ) was created, which is just $JD-2400000.5$.

By definition the MJD zeroes at solar noon at the 0° meridian. Therefore, it is not a regular time measure, it is tied to Earth's rotation and accelerates or decelerates depending on minute variations of Earth's rotating speed.

You can use basically any solar time including all flavors of UT time to define your MJD, but the most precise is UT1.

But UT1 is not a regular measure of time either, and is also affected by variations on Earth rotation speed. The only really regular time standard among the ones you mention is UTC, which is based on atomic clocks. Being regular, the solar noon drift off UTC and doesn't happen at 12:00 h UTC, therefore, leap seconds are added to keep UTC reasonably close to solar time. But a record of leap seconds is kept so you can use UTC to precisely measure time intervals independently of the variations of Earth's rotation.

In that sense UT1 and UTC are not two flavors of the same thing as you suggest, they actually measure two completely differing things. The first measure Earth's rotation and the second measures time. Due to the same reason, MJD cannot or should not really be referenced to UTC (otherwise it would not zero solar noon).

Said this, in those bulletins the MJD conveys exactly the same information than the date. So "2019 1 2" meaning January 2nd 2019, conveys exactly the same information than MDJ 58485, it is just a more machine friendly way to refer to a specific day. And it also removes the need to account for missing calendar days if you work with dates relatively far in the past.

Now if you want to know how much time have elapsed between two entries in the table, you need to know how to transform whatever version of solar time they use (UT1 in this case), to a regular time reference like UTC or TAI. That's why the "UT1-UTC" value is included. In any case, in doing such calculation you need to take in account any leap seconds added to UTC between the time of the two entries.

Does that makes sense?

Apparently, the IERS publishes values for each 0 h of UTC in their bulletins. I myself thought otherwise, but I recently noticed, in a geodesy exam, that they mentioned UTC for the daily parameters.

Upon closer look at the Bulletins themselves, I was able to confirm this: 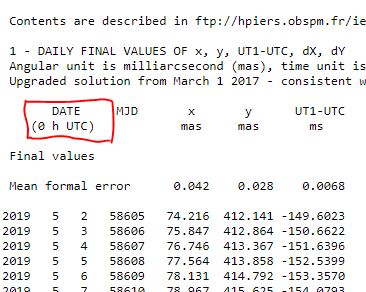 Although using UT1 instead of UTC for interpolation should cause only tiny errors, smaller than the posted errors of the final values.

Not the answer you're looking for? Browse other questions tagged geophysics planetary-science earth-rotation earth-observation or ask your own question.

10
Is it known what determines the rate with which plate tectonics occur?
6
Is there a time difference between two points at the same longitude but at different latitudes?
4
What time and date is the sun directly overhead a given place on Earth?
2
Terrestrial Day vs. Venusian Day: Why the Huge Time Difference?
2
Flight time differences between flying east and flying west
8
Seeming correlation between time of day and earthquakes
1
Is there a name for a “moving meridian” corresponding to particular solar time?