Why does the frost depth increase when the surface temperature warms up?

We've had an unusual winter this year, with a late cold snap that is causing people's underground water lines to freeze. Now that the weather has warmed up quite a bit, even more people's lines are freezing, because the frost is being pushed down even deeper by the thawing ground above it.

What causes this phenomenon? Why does the frost not simply thaw from top to bottom after it warms up? Why does it continue to go deeper?

That's is due to the slow diffusion of heat into the ground. Unlike a liquid, pieces of soil can't move around, therefore, in the absence of liquid water, heat can only be transferred by conduction, a process that follows the diffusion equations and it is very slow.

This means that if there is a heat wave, or a cold snap, their effect will reach deep layers of the soil with a delay, the deeper the longer the delay and the more dampened the wave will arrive.

This figure shows a heat wave in the soil 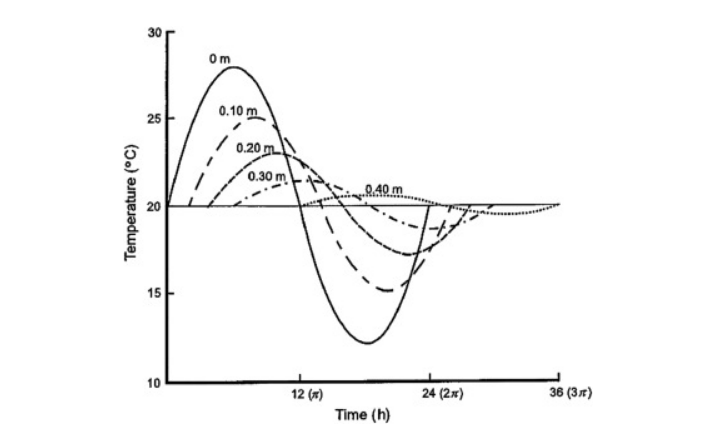 (figure from Soil Temperature at ScienceDirect)

In you case, what is happening that the cold snap is still "traveling" down the ground.

An alternative way to understand this, is that the cold snap cooled the ground so that a layer below the surface can be now at, let's say -5°C, and it is on top of a deeper layer at +1°C, where the water pipe is located. What that deeper layer feels is not what happens in the surface, that is nice and warm, it feels the temperature of the layer right on top of it, that is still very cold. So that deeper layer will cool down and eventually freeze. Freezing as well the water line with it.

That said, and to address some great comments. The current freezing of underground water lines responds to a past forcing. Therefore, it have nothing to do with current weather and is not the thawing ground what pushes the frost down. It is just the normal curse of events in the propagation of a cold/hot wave down into the ground.

6
How deep does the frost have to go before it becomes permafrost?

8
When does the Northern Hemisphere reach minimum land area covered by solid H2O?
6
How deep does the frost have to go before it becomes permafrost?