I would like to find sources of topographical data for Earth's surface.

I've looked in GIS SE and Open Data SE but haven't found a good answer to this so I though I'd ask here in Earth Science.

I'm looking for resolution of something of the order of 5 meters vertically an 10 horizontally, but there's no specific hard requirement.

This is an interesting and common question, so I'll try to give a good answer here, that I think is a good place, as well as GIS and Open Data SE. First, regarding the format, you will never find data natively stored in text or tabular form, because the large data volume would lead to huge files very difficult to handle. Data is usually stored in binary files, common standards are .hgt and .tif. And there are many software and utilities that can export small subsets of the data into text, csv, or tabular formats.

I'll list here the global or near to global sources. All of them have advantages and disadvantages, and all have data gaps and artifacts, specially in areas with rough topography. So depending of your area of interest, one or the other can be better.

The most widely used standard, due to its quality, resolution, and coverage. It covers the whole globe between latitudes 60°N and 56°S. 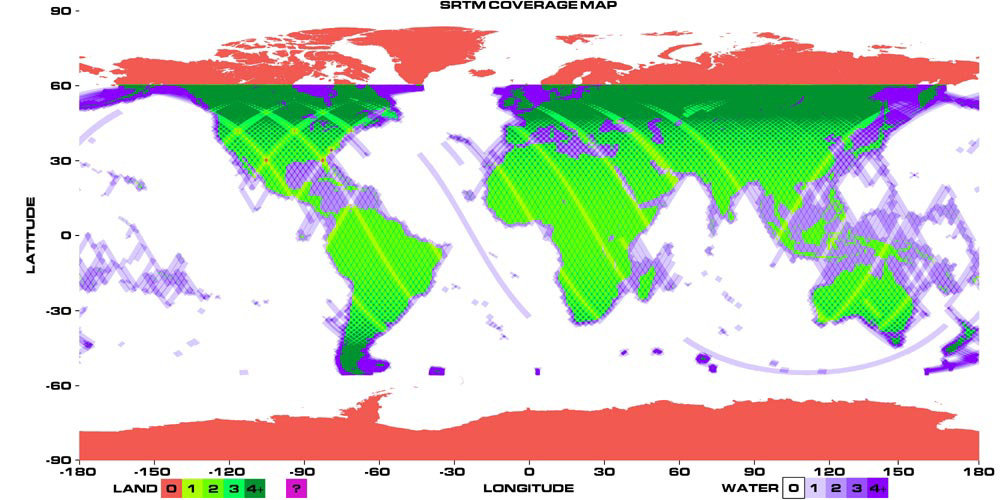 In contrast to all other datasets, all the data was acquired in a 11-day mission, therefore, it have unmatched consistency, specially in areas with rapid terrain changes like glaciers, open pit mines, cities, etc.

The space shuttle was carrying two radars that created two independent terrain models, the coverage above corresponds to the SAR-C instrument that produced the data that is most widely used. The second instrument was the X-SAR, that had a narrower swath, and does not have global coverage.

There are multiple versions of these datasets:

The latest official release is version 3. It comes in its original form, that includes data gaps and a gap-filled version, on which those gaps have been filled with data coming from multiple sources (but primarily ASTER GDEM).

The data can be accessed through multiple gateways, some of them are:

An independent post-processing of SRTM data. Known also as SRTM v4. It consists of a gap-filled version of SRTM using an advanced algorithm. It is only available at 3 arcsec resolution (90 meters) . It can be downloaded at the CGIAR SRTM Download manager

The SRTM data was reprocessed with cutting edge technology, improving accuracy and reducing data gaps. In contrast to other SRTM versions, it offers also a ellipsoidal version of the data (instead of geoidal), and the data comes in floating point values (instead of integers). NASADEM is expected to be the last official release of SRTM data. This DEM is still in the development phase but should be released at any time. A provisional version has been released and can be downloaded at the MEaSUREs data repository. More information on how to use this data can be found in my answer here.

This dataset should NOT be confused with the "NASA Shuttle Radar Topography Mission Global 1 arc second V003" (SRTMGL1). Which corresponds to the SRTM v3 data described above.

Some individuals like Jonathan de Ferranti, tackled the gargantuan task of doing a manual quality assessments of all the gaps of the SRTM and areas that have erroneous data. To then fix it using many sources, including many national mapping agencies from around the world. He produced a great version of SRTM with most errors fixed. Unfortunately, all this work was done before the worldwide release of full resolution SRTM data in 2014, therefore, for most of the world this data have only 3 arc-sec resolution (~90 m). And it can be downloaded at ViewFinderPanoramas.org.

Data from the second radar on board the Endevour space shuttle during the SRTM mission. It has slightly higher resolution (~20 m) but worst coverage, because the multiple swaths did not overlap, so for example, over North America the coverage looks like this:

This data can be downloaded from DLR Geoservice.

With almost complete coverage between 83°N and 83°S, GDEM was produced from more 1.5 million stereo pair images by ASTER sensor. A joint project between JAXA and NASA on board of Terra satellite. This is the coverage of the latest release:

Somehow the successor of ASTER, ALOS and its instrument PRISM, also offer stereo capability and higher resolution. And it was used to generate a new DEM with near global coverage:

The free 30 m resolution version of the data (with maximum resolution of 5 m), can be downloaded at JAXA AW3D30 DSM data page (need to sign up first). Current version is AW3D30 v2.2 (released in April 2019).

The "Global Seamless DEM 30" is a 1-arcsec (~30 m) DEM that was constructed by merging unfilled SRTM, ALOS World 3D, and ASTER GDEM v2 datasets. By combining all these sources, it reduces data-gaps and significantly improves the quality of the data in regions where any of the base DEMs performs poorly. Data can be downloaded from the Wuhan University's SENDIMAGE servers. More details of the data merging process can be found in this paper.

This two projects turned the polar areas from being the ones with the worst available topographic data to the ones with the best data. By computing DEM's from millions of stereo image pairs from the high-resolution imaging satellites of DigitalGlobe. ArticDEM covers all latitudes north of 60°N: 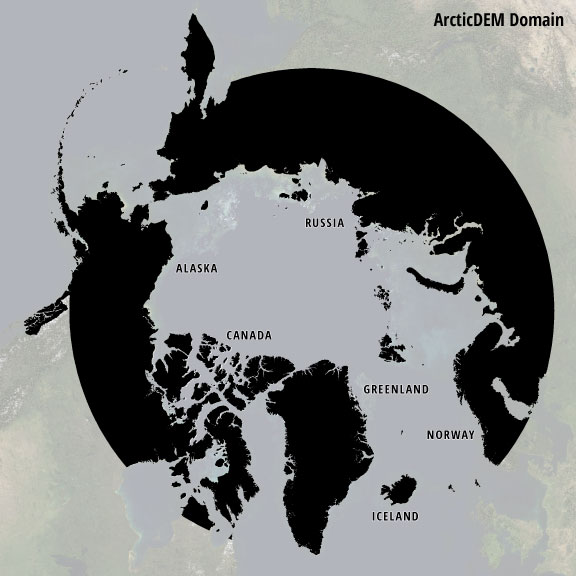 And REMA covers all latitudes south of 60°S: 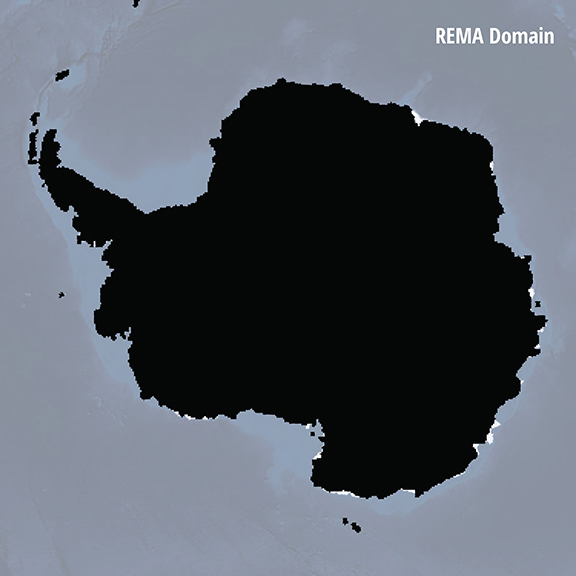 The data can be explored and downloaded from the ArcticDEM Exporer, and Antarctic REMA Explorer.

Not the answer you're looking for? Browse other questions tagged remote-sensing open-data topography or ask your own question.