One key target set out by the IPCC is to be carbon neutral by 2050. That is, the gross green house gas emissions of Humans is less than the carbon absorbed. I'm struggling to find a good source for the value of that second number. What is the volume of GHGs that are absorbed yearly, globally.

Eye-balling the net emissions set out in the IPCC 1.5 special report, and the total gross emissions referenced in this Wikipedia page, puts the number at about of 5Gt CO₂e. Is this correct, and is there a more precise source for this? Or have I misunderstood something?

As Camilo mentioned in the comments, “carbon neutral” in this context means zero net carbon emissions. This is the gross anthropogenic carbon emissions (fossil fuel burning and land use change) minus the carbon absorbed through managed practices. That distinction is important; you don’t include the carbon absorbed by the ocean and land through natural processes to offset gross emissions in the calculation. Since 2010, the UN Environment Programme has published an “Emissions Gap” report each year that includes some relevant emissions numbers:

The following is a nice schematic of various negative emission technologies (NETs) that could be used as mitigation in the overall budget: 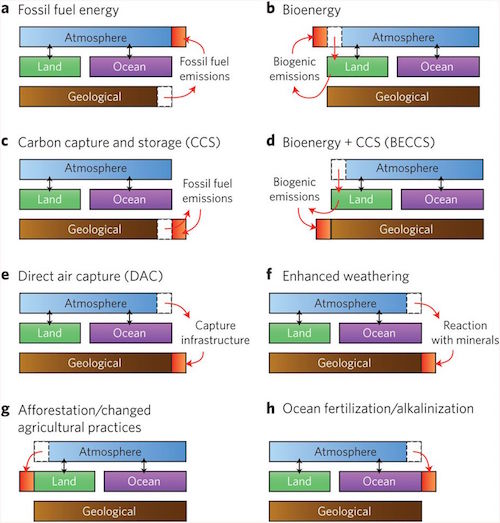 Carbon capture and storage (CCS) is done at the point of burning fossil fuels, so reduces gross fossil emissions. Panel (g) is called LULUCF (Land Use, Land Use Change and Forestry) in the Emissions Gap reports and AFOLU (Agriculture, Forestry and Other Land Use) in the IPCC 1.5 Special Report, and that is effectively the +4.2 GtCO2e/year quoted above. The idea is that in the future land management will have to change to turn managed land from a net source to a net sink of GHGs. As for Bio-energy Carbon Capture Systems (BECCS), the current levels are about zero, although there are a dozen or so demonstrator projects totalling about 0.001 GtCO2/year. So at the moment it barely makes a dent in the overall budget, but mitigation scenarios require it rising to an order of 10 GtCO2/year by 2050: 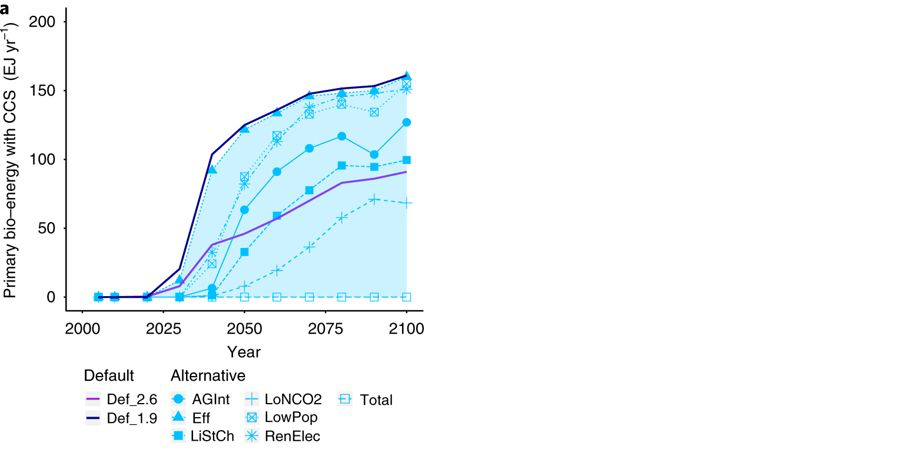 The energy production from the use of BECCS over time in a range of mitigation scenarios.

The IPCC special report also has a nice schematic of how NETs contribute to emissions scenarios. Although there's no timescale on the schematic, most of the actual scenarios don't show any notable BECCS until 2030. 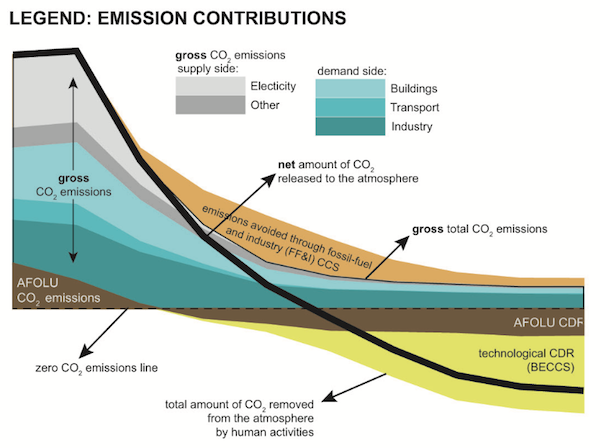 Figure 2.5 | Evolution and break down of global anthropogenic CO2 emissions until 2100

Source: Rogelj et al (2018) "Mitigation Pathways Compatible with 1.5°C in the Context of Sustainable Development", Chapter 2 of the IPCC Special Report on Global Warming of 1.5°C.

10
Hypotheses about Silurian carbon isotope excursions?
2
How much net carbon can coral sequester?
3
Why doesn't Earth absorb our carbon emissions?
2
What is the total mass of organic carbon on Earth?
3
How do the slow and fast carbon cycles influence climate change?
2
What exactly does point-of-no-return for carbon emissions mean?