Ask Question
Asked 9 months ago
Active 9 months ago
Viewed 48 times
2
$\begingroup$
Closed. This question is off-topic. It is not currently accepting answers.

TOP) about 1 cm thick, plate-like, dark coffee brown, bubbly melty looking texture. The top layer is harder (about a 5, scratched with a knife) and the edges are abruptly broken into long gentle curves with very distinct edges. I cannot easily break off a piece.

BOTTOM) about 4 cm think at thickest point, pale orange "redrock", sandy texture, softer than the top (about a 3, scratched with a penny) and smoothly rounded. If any edges existed in the past on this bottom part they have been worn away. Pieces do not break off easily, but the bottom layer scratches more easily than the top.

Weight seems about what I'd expect for a rock this size, maybe slightly lighter?

I'm very curious about the mineral nature and appropriate name for this kind of rock, but also what the possible processes were that could have made this rock look like it's burnt on top, but still raw on the bottom?

I found the rock in Southern Utah Red Rock country somewhere, but unfortunately I no longer remember the exact site. It was something I just picked up from the ground as is. I don't think it was unique to other rocks around it. There were several in the area with this same texture / combination. Although, I don't think all the other rocks were loose like this one, some were still attached to the mountain. 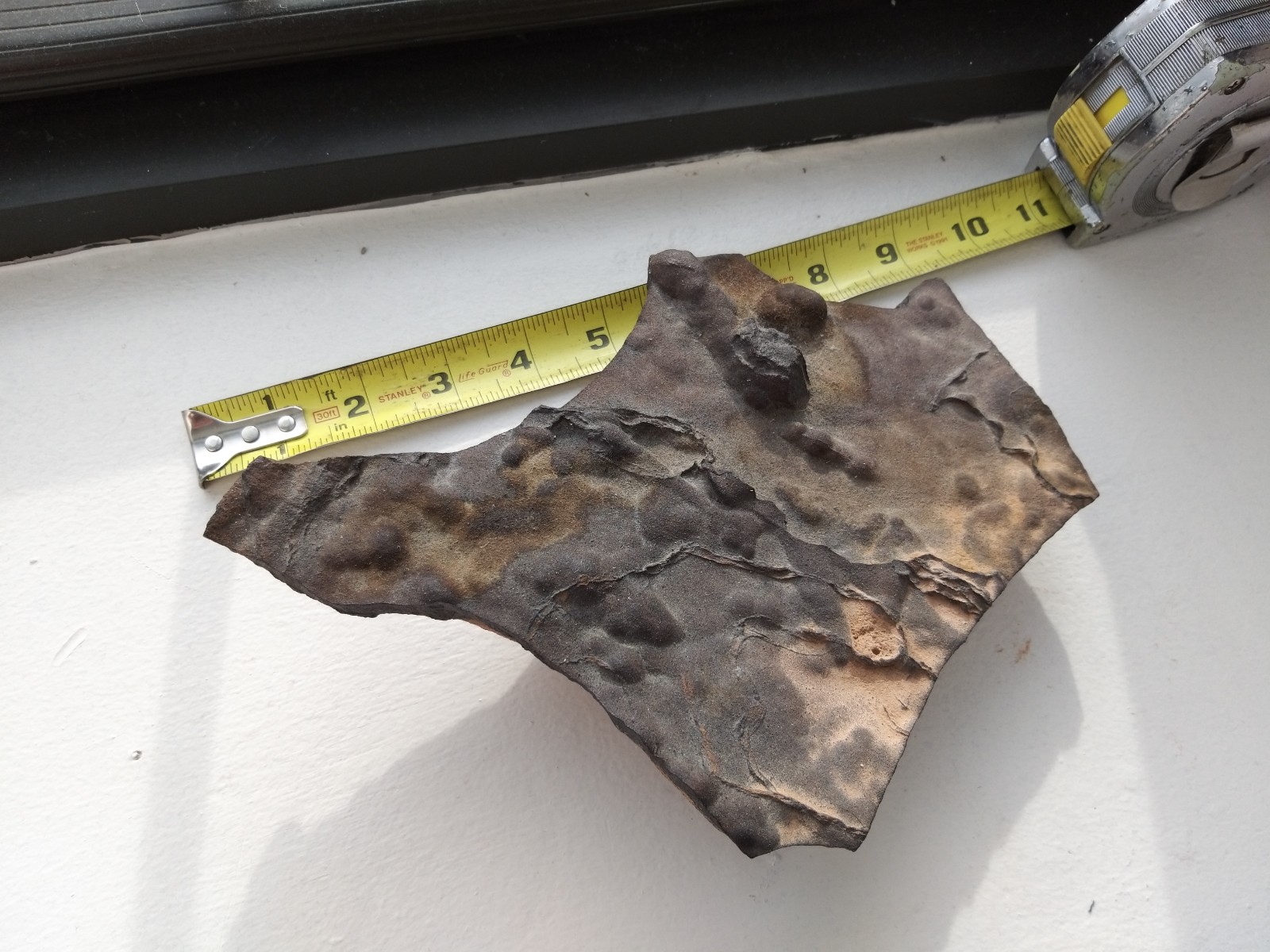 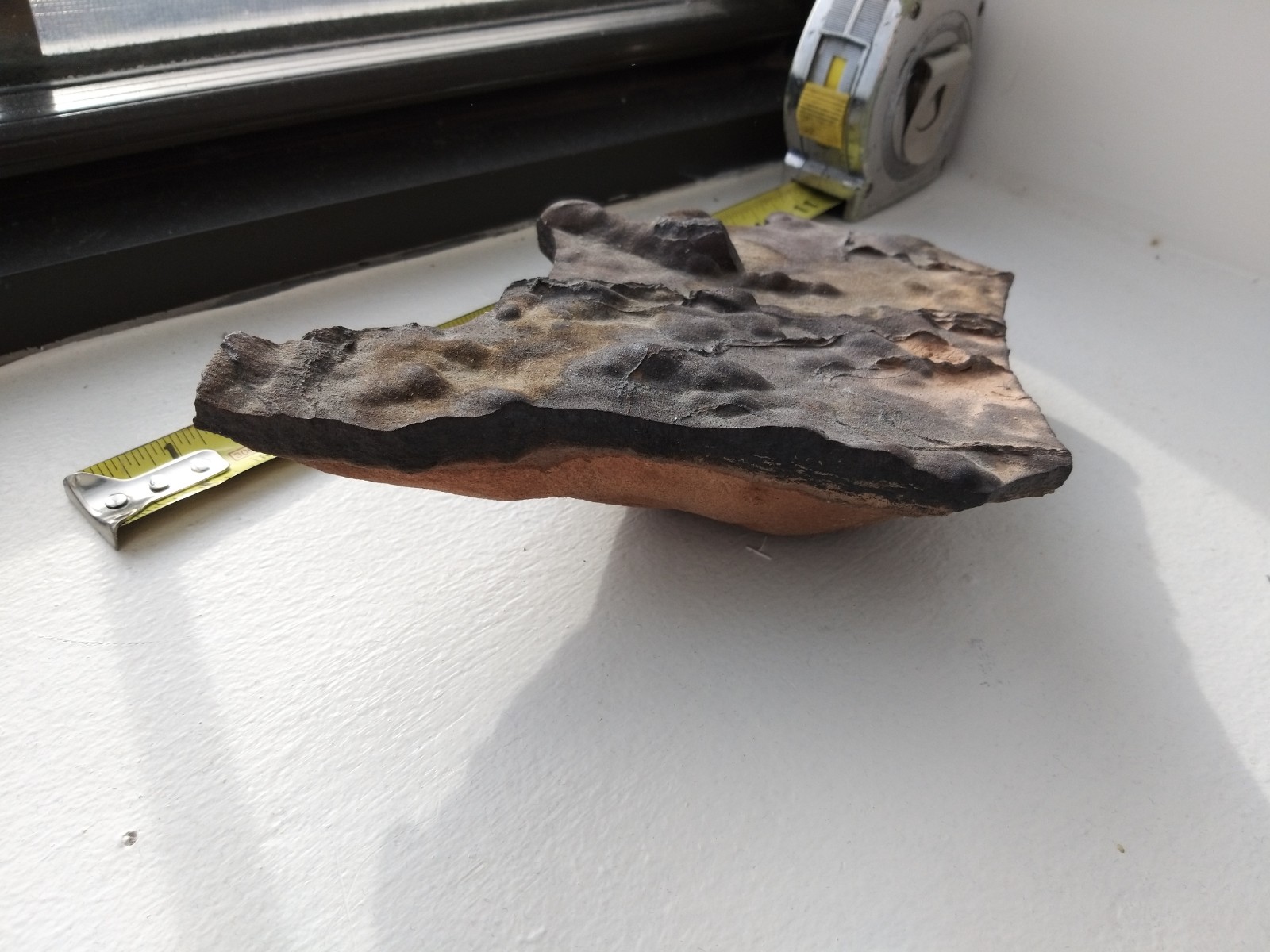 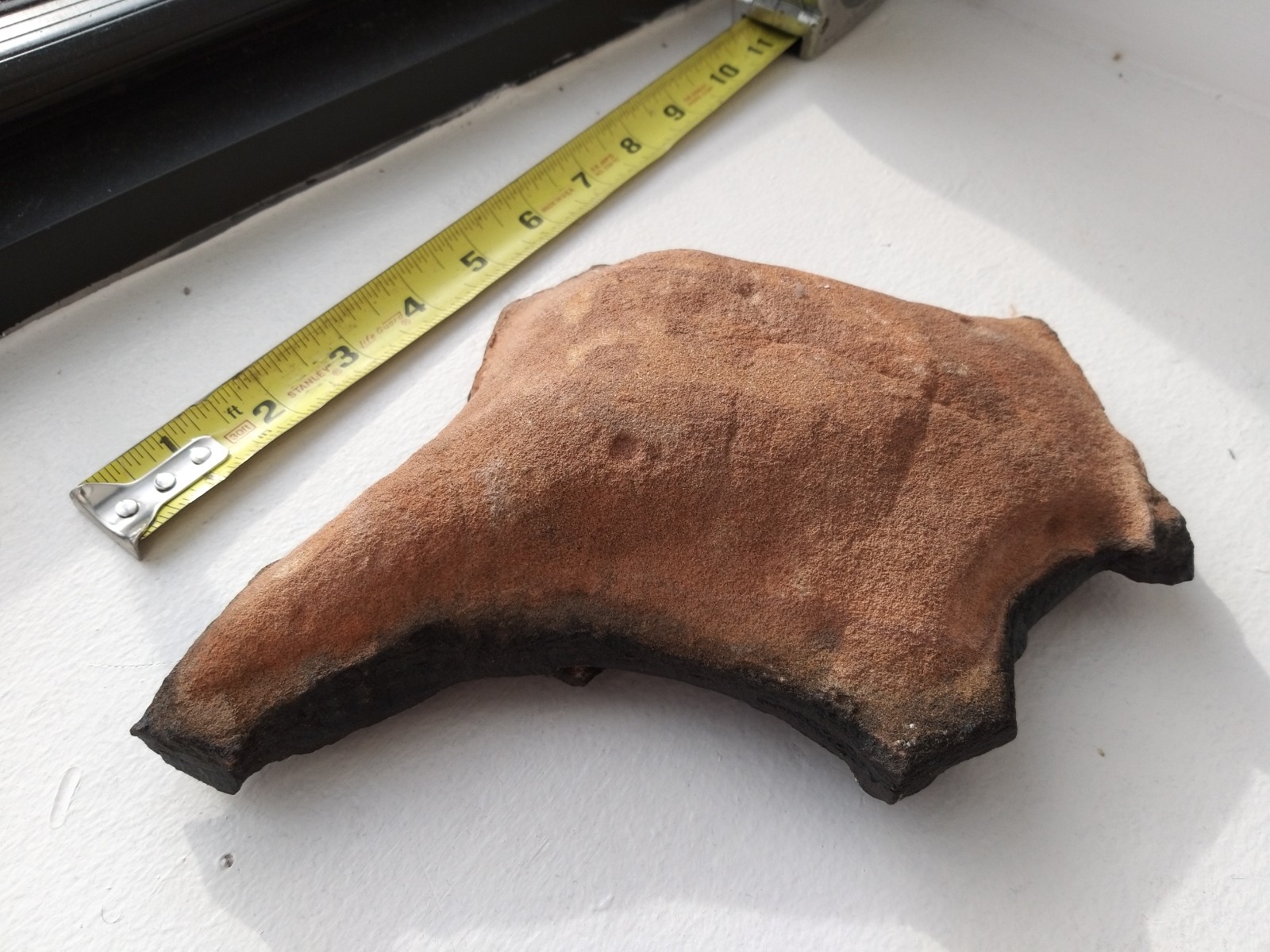 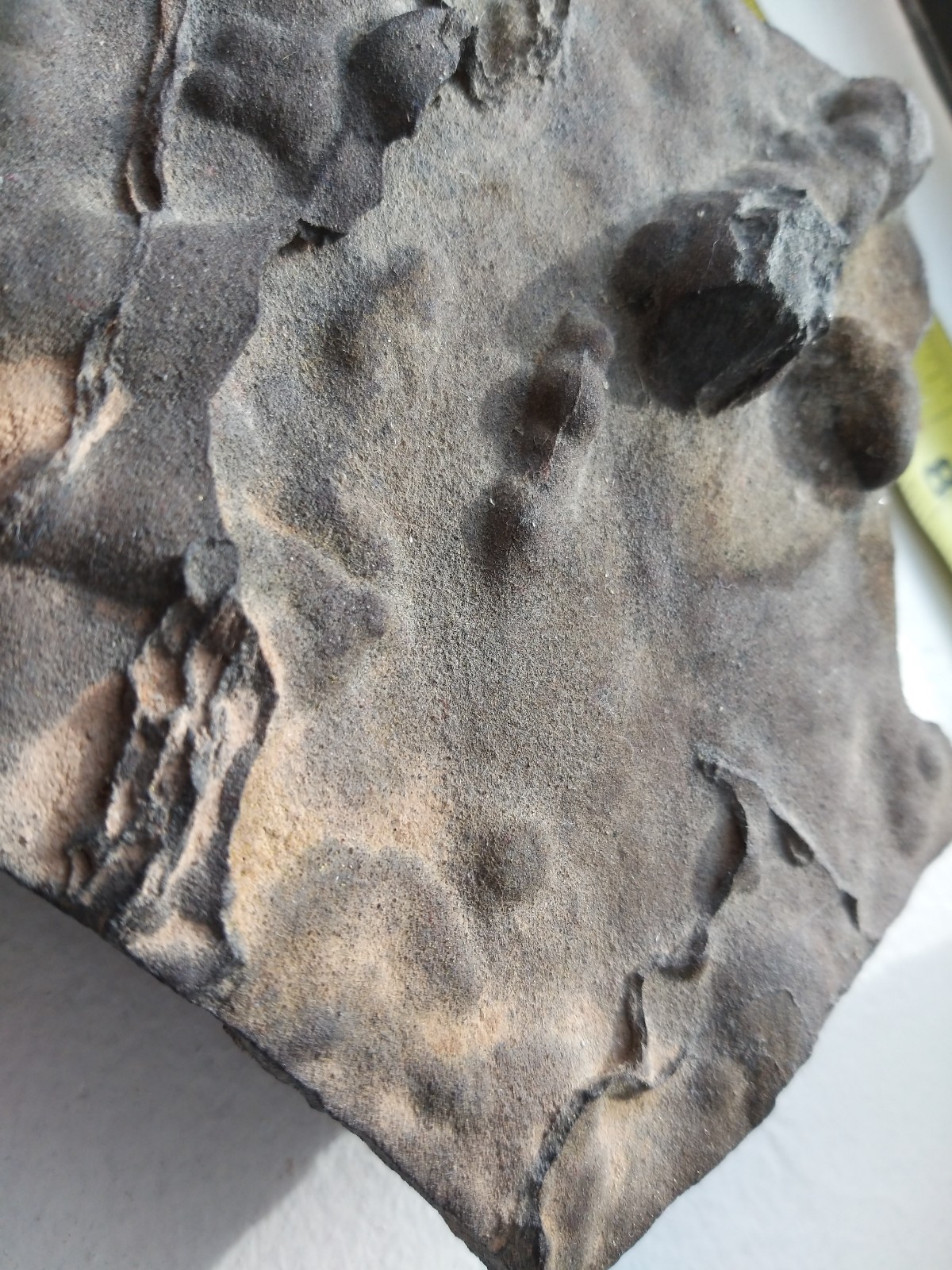 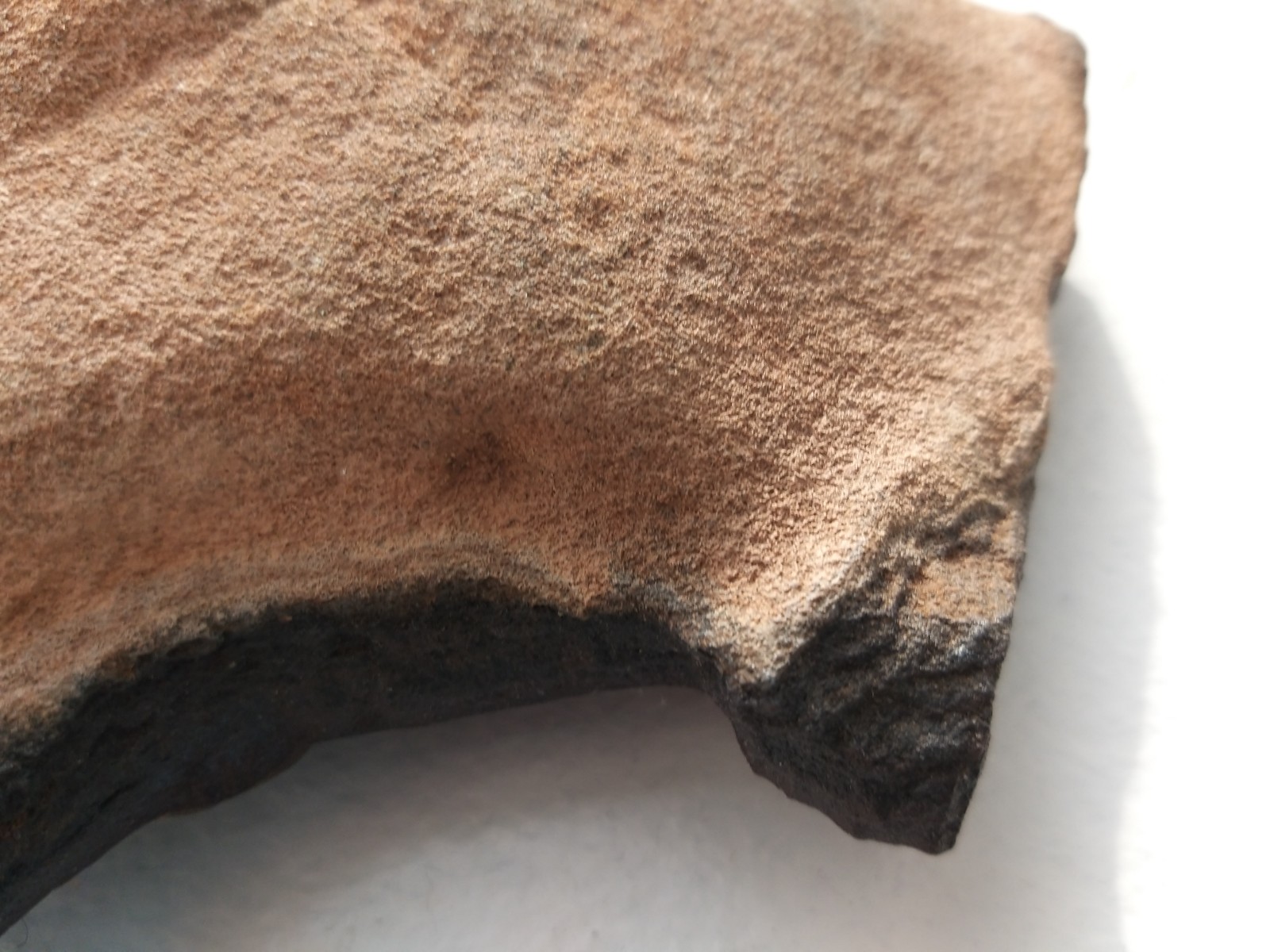 I would give the following identifications and interpretations.

I would identify it as "ironstone." Basically, it consists of sandstone that is solidly cemented and even partially replaced by iron oxyhydroxides. Normally, this type of ironstone, especially in the Southwestern United States, results from the replacement of a siderite, iron carbonate," cement. In fact, the iron in the iron oxyhydroxides might have come from the dissolution of the siderite by the circulation of reducing fluids through the sandstone. The features that it exhibits appear to only concretionary features cementation along and the filling of former cracks in the sandstone.

Detail discussions of how this type of ironstone is formed:

II. "BOTTOM) about 4 cm think at thickest point, pale orange "redrock", sandy texture, softer than the top (about a 3, scratched with a penny) and smoothly rounded."

I would identify it as ferruginous (iron-cemented) sandstone. it is sand that cemented, but not replaced, by iron oxyhydroxides. the cement was precipitated by the circulation of reducing iron-rich fluids through the sandstone. The difference between the two rocks is mainly the degree to which the sand has been cemented and replaced by iron-rich fluids that circulated through them. For the details, see the above references.