How can linear oceanic ridges (like the East Pacific Rise) be explained by single point mantle plumes?

I'm a bit confused about how divergent boundaries between tectonic plates work, or just why plates move. I've read that these ridges that are in the place of divergent boundaries are created when magma arises from the mantle convection, probably powered by a mantle plume. This creates a hotspot, but in every illustration I have seen, they use these plumes or just the mantle convection force to explain why plates move apart each other: 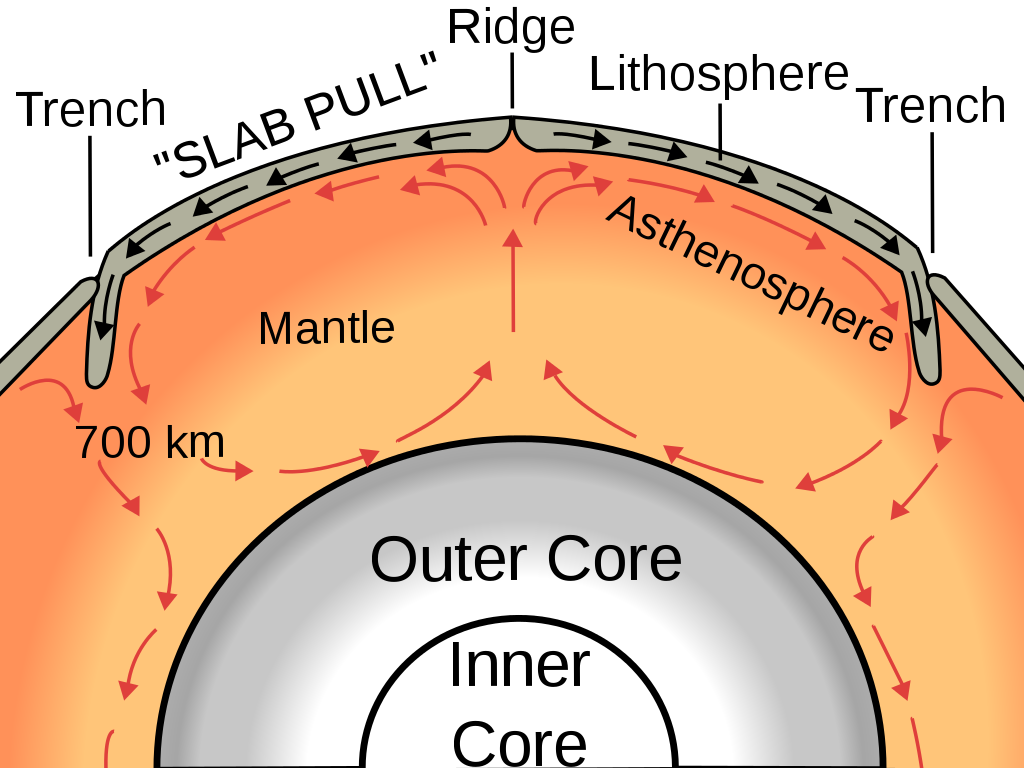 Here, that convection of the mantle is used to explain the formation of a ridge and why the plates move apart.

However, this is easy to understand with a cross section of the Earth like in that picture. But I can't wrap my head around the idea of this phenomenon creating the linear ridges we see extending across thousands of kilometers, like the East Pacific Rise. Because, that "ridge" we see in the above picture is just an elevation seen in a cross section of the Earth, that could very well be just a volcano or a single oceanic mountain, not a linear ridge of continental dimensions. 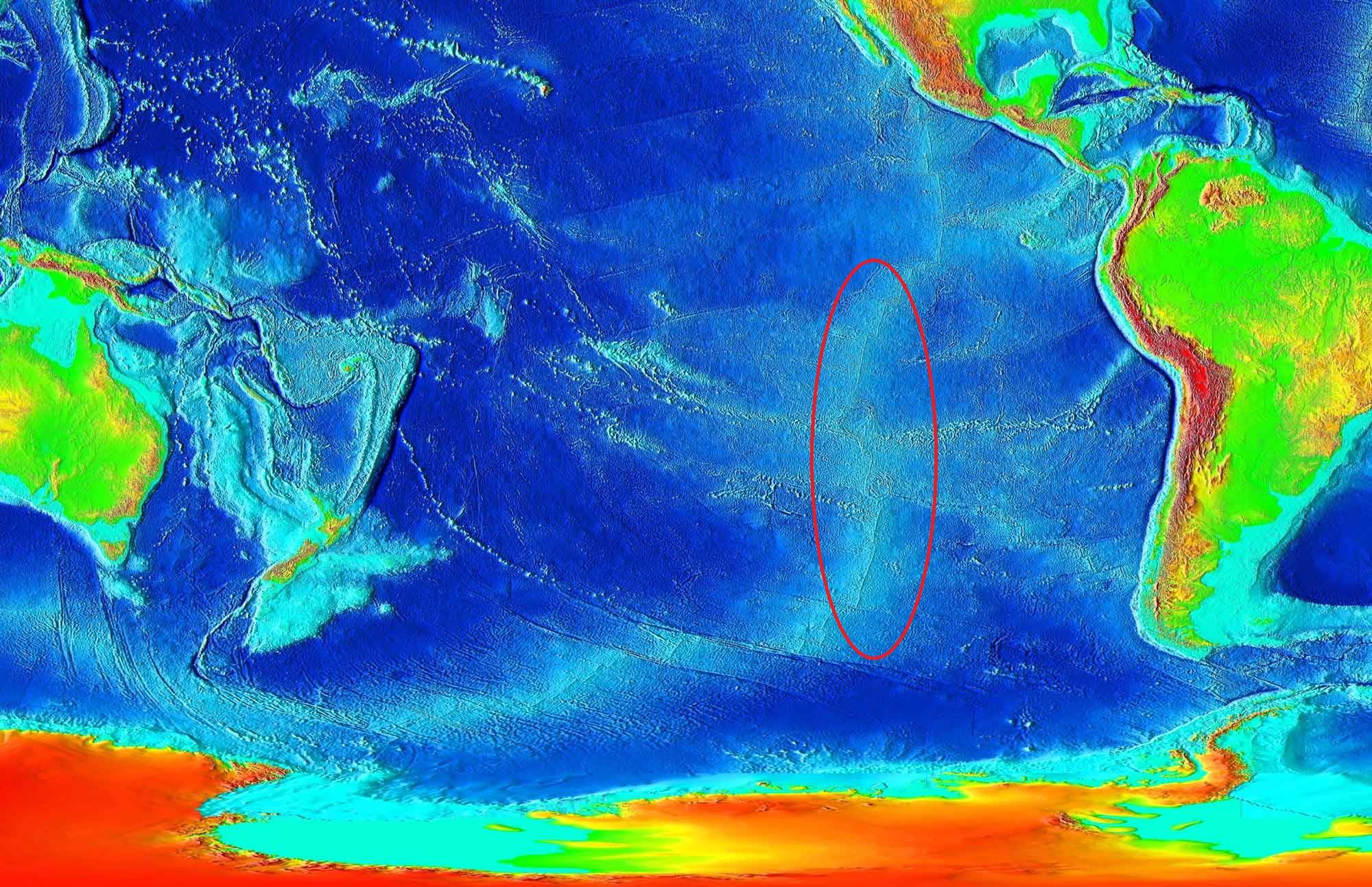 That can't be produced by a single mantle plume, right? Because a mantle plume is just in one spot. Is the convection force of the mantle rising across that entire line that is kilometers wide, creating a linear mantle plume? If that last one is the case, I would be even more confused about the shape of the convection cells in the mantle. Or are there multiple individual mantle plumes conveniently aligned across and beneath that ridge?

So, I don't understand how the ridge is formed. Because the first picture helps me only to understand how a single elevation spot is created, like an underwater mountain, or a volcano, or even a volcanic island, but not an entire ridge.

Now, I do know that the chain of Hawaiian islands up to Siberia was created due to the tectonic plate passing above a plume, or just a hotspot, and that created the entire "ridge". But are all oceanic ridges formed in that same way? Due to a single plume creating a hotspot and the plate moving above it drawing the ridge as it passes? Or is this a different process? Because I also know this is happening in the middle of a plate, not a divergent boundary

This is a picture about the Hawaiian island formation I read: 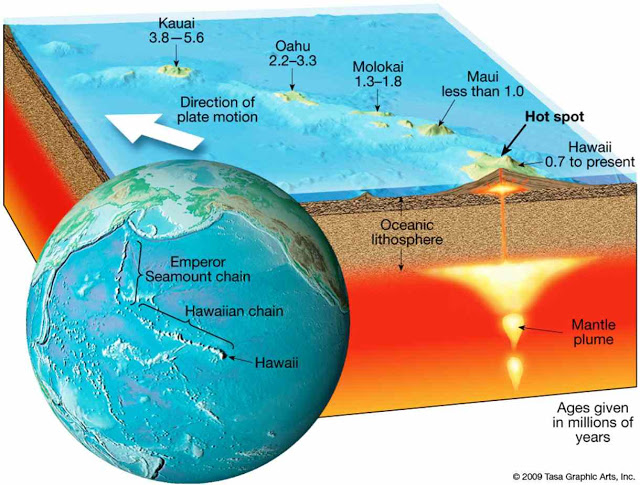 I hope someone can help me understand this a little better! Thanks!

Hot spots stay in one place while the earth crust above them drifts and thus create a line of dormant volcanoes, they are a point features so to say.

Ridges are places where the mantle convection wells up and spreads in two directions, gently pulling the earth crust with them and creating new crust where the magma wells up. Ridges may be described as linear features.

So, without convection and thus without ridges, which form new earth crust, the hot spots wouldn't create a chain of volcanoes.

hot spots help/control how spreading centers form but they are not what keeps them going.

If you push on a thin amorphous material perpendicular to the surface they tend to crack/split at three cracks roughly ~120 degrees to each other. If you push at several points close enough to each other these cracks will tend to link up as long lines with 120 degree angle shifts spread throughout it. Rising mantle plumes create doming which splits in these 3 120 degree angles. These are called triple junctions. Plate boundaries can be mapped by connecting the dots between known triple points, usually with two active and one dead fracture, continental crust boundaries in particular are dominated by these angles. Basically hotspots create uneven distribution of stress and weaknesses in the crust for convection currents to exploit, affecting where the crust breaks. as the crust breaks and seperates the mantle can more easily push up creating a kind of feedback that turns single points into a line of spreading. The smaller and more isolated the plume the more likely it will just stay just a hot spot.

Note this is different than how hot spot induced island chains like Hawaii form. Which is caused by a single isolated hot spots punching a series of holes in crusts that is dragged over it.

Not the answer you're looking for? Browse other questions tagged plate-tectonics ocean-ridge mantle-plumes or ask your own question.

21
What caused the bend in the Emperor/Hawaii chain of islands, 45 million years ago?
14
Is continental drift caused by lava pushing the seabed apart?
5
How can we have "floating" and convection currents in a non-liquid mantle?
1
Speed of tectonic plate movement
7
How did Australia separate from India?
12
Is the Mid-Atlantic Ridge a ridge or a trench?
5
Number of tectonic plates
3
Do tectonic plates "float" over the mantle and "collide" like icebergs?