the study estimates the potential costs of permafrost carbon feedbacks (PCF) and surface albedo feedbacks (SAF) under different emissions scenarios, while also taking into account the nonlinear nature of these feedbacks.

conclusions are pretty straightforward, but i'm a bit confused by this figure: 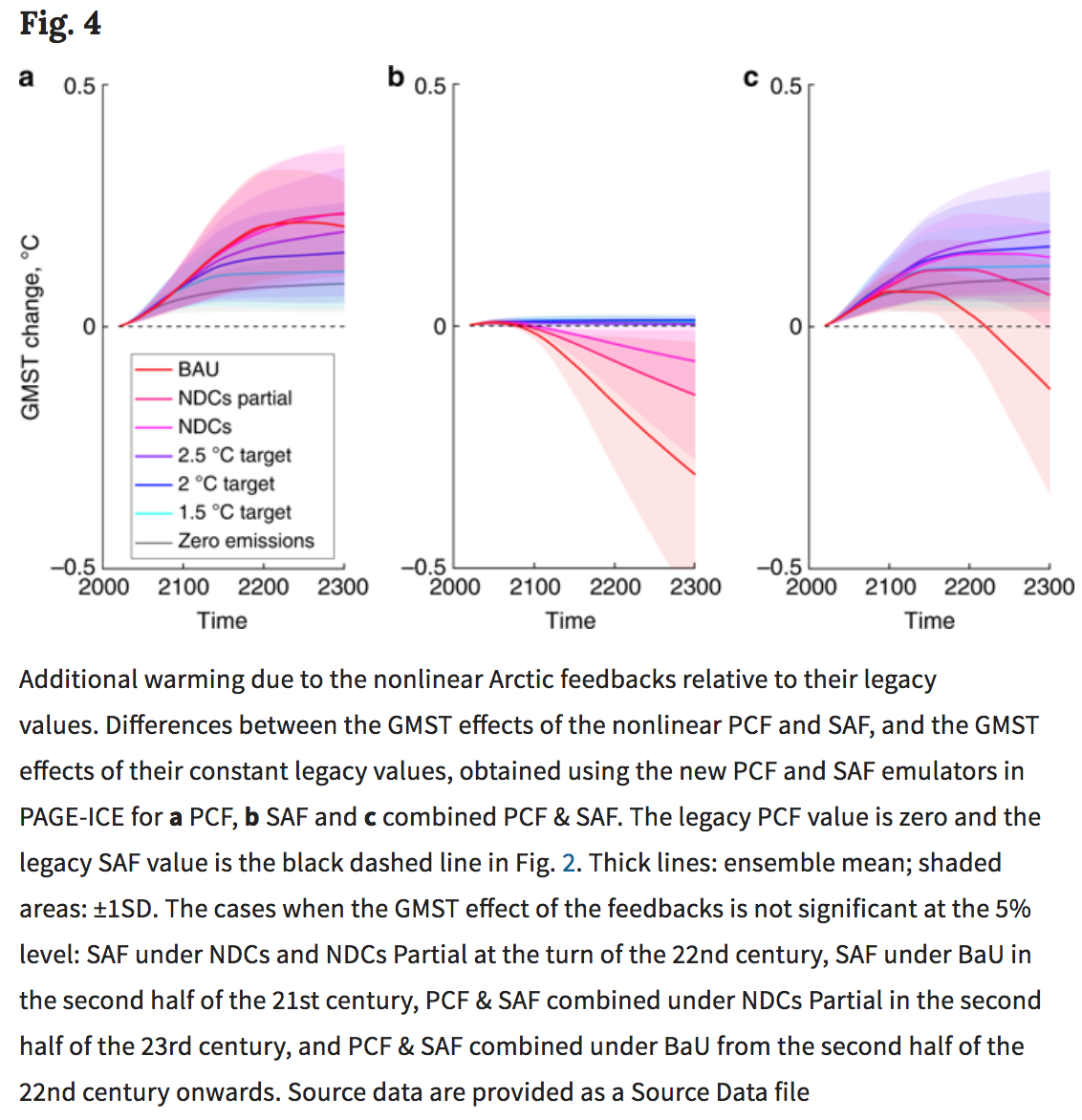 what confuses me is this: "The nonlinear SAF is dominated by the decrease of its sea ice and land snow components (Fig. 2), resulting in less warming and negative GMST changes compared to the constant legacy SAF (Fig. 4b). The NDCs, NDCs Partial and BaU scenarios have the largest temperature increases and greatest decreases in land snow and sea ice SAF components, and thus show the greatest negative differences in GMST. The differences are the highest for BaU with nearly ice-free oceans and snow-free land even in winter after 2200. For the Zero Emissions, 1.5 °C, 2.0 °C and 2.5 °C scenarios, there are small increases in GMST for the entire time period due to the small peaks in the sea ice and land snow SAF components within this temperature range (Fig. 2). Overall, the constant legacy SAF appears reasonable for low emission scenarios, but overestimates GMST for high emission scenarios according to the current generation of climate models (CMIP5), with no apparent tipping points (Supplementary Fig. 4).

The nonlinear SAF can partially compensate for the PCF (Fig. 4c). For the high emission NDC, NDC Partial, and BaU scenarios, reduced warming due to the nonlinear response of the SAF partially cancels out warming due to the PCF. The effect is strongest for the BaU scenario, where the change in GMST from the legacy value switches sign from positive to negative. The SAF slightly amplifies the PCF for the low emission scenarios where the constant SAF forcing assumption remains valid (Zero Emissions, 1.5 °C, 2.0 °C and 2.5 °C). This means IAMs that do not include the PCF and assume a constant SAF will underestimate GMST by between 0.1 and 0.2 C for all but the highest emissions scenarios. These findings stemming from the nonlinearities both in the PCF and SAF have been overlooked in climate policy studies so far (Supplementary Note 5)41,42,43,44."

a lead author explains it more simply: "These two components are set to peak for global temperatures within the range covered by the Paris Agreement, but if the climate warms further, the summer and spring sea ice and land snow covers will retreat further north and the albedo feedback will actually weaken. [...] High emissions scenarios, such as the current business as usual trajectory (BaU) -- expected to lead to around 4°C of warming by 2100 and cause by far the highest impacts on ecosystems and societies -- are also included. Under these, the strength of the PCF reaches its peak and does not increase further, while the continued weakening of the SAF gradually cancels the warming effect of the PCF."

can someone explain the logic behind this - why does albedo feedback weaken under a high emissions scenario?

Browse other questions tagged arctic permafrost or ask your own question.

8
What amount of permafrost carbon release could be expected with the IPCC worse-prediction of a 4.8C temperature rise?