What would be the extent of the feedback on climate of unattended deaths event?

Being given that decaying corpses will stop emitting digestive metane, but would release huge amount of methane during their decaying process, I was wondering if this could be considered among the Climate change feedback loops?

To illustrate this, let's just say that scenarii for year 2050 include possibility that population (and livestock) would collapse in a decade. We may have something like 200'000'000 tons mammals decaying in a 5-10 years span... This is not even a quarter on below image, but already so many methane released at once!

Edit: I am not looking for existing signs, I am thinking of the effect of billions of mammals death on the greenhouse effect caused by the consequent huge methane release. 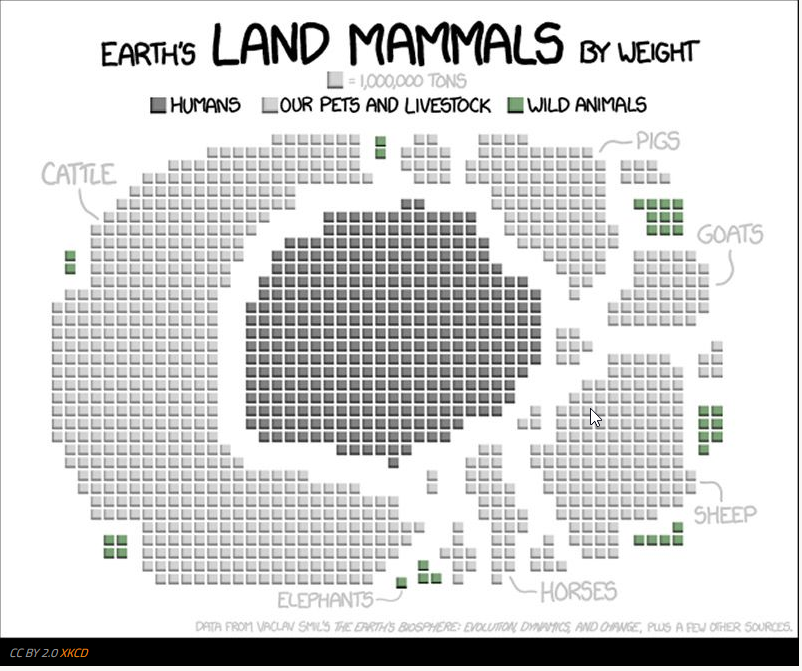 If all those dead mammals were composed entirely of methane, they would increase the atmospheric concentration of methane by about 2%. They aren't, and (as @trond hansen commented) most of their carbon would be converted to $\ce{CO_2}$ with a 30-fold smaller global warming footprint.

So, I think it's safe to say the impact of decomposing mammals would be relatively small.

Worry more about effects on plants, which constitute 80% of the Earth's biomass; bacteria, which constitute 15%; and fungi, which constitute about 2%. The entire animal kingdom amounts to much less than half a percent of global biomass, and half of that is arthropods (which have their own concerns for the future).

21
What caused the Younger Dryas cold event?
10
Why does the rising of high clouds due to climate change impart positive radiative feedback on radiative forcing?
12
How will climate change affect the extent of the Sahara Desert?
17
To what extent is hydroelectric power really renewable?
17
Which places on Earth would be affected the least by severe climate change?
0
In terms of the greenhouse effect, what is the Earth's heat capacity?
6
What is the relevance of Arctic coastal erosion to the Earth's climate?
3
How do the slow and fast carbon cycles influence climate change?
4
When would the earth run out of carbon dioxide without man made climate change?