Is there a widely accepted reason for the formation of tafoni?

Expansion of tafoni seems to be based on weathering (seems reasonable enough.) But what creates them in the first place? There are a number of explanations online (Wikipedia lists eight plausible causes!) Many websites trying to give a simplified explanation simply say "salt weathering", but from a brief search it's clear that salt weathering is not always the cause of tafoni [0]. They develop on a wide range of rock types, from granite to sandstone to tuffs and conglomerates, and in many situations where they'd be expected to develop they don't.

From what I can tell, they seem somewhat mysterious, and there are explanations that make sense in some cases but not every case of tafoni is well explained. Is there a widely accepted explanation for the formation of tafoni? 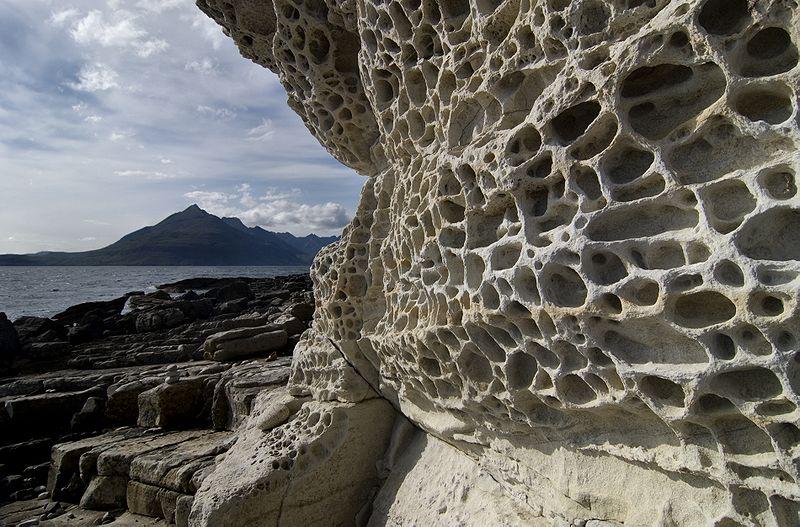 I had a good geomorphology teacher. He was so good that I bought his book, published on Prentince Hall at 2008. He is an aged an experimented geomorphologist, so I totaly trust there is not an agreement about the physical origin of tafonies (or at least there wasn't an agreement at 2008 when his book was published).

"Its origin [tafonis] is controversial (Twidale and Vidal Romaní, 2005). Some authors differentiate between wall tafonis and basal tafonis, linked to the processes of basal undermining (Smith, 1978, Bradley et al., 1978). It is agreed that the dominant processes are those related to the movement of water with salts close to the surface, which correspond to haloclastism and wetting and drying. Thermoclastism, cryoclasty, dissolution of carbonated cements and wind erosion are also mentioned (Evans, 1969-70, Mustoe, 1983, Young, 1987, Robinson and Williams, 1992). In addition to these subaerial processes, some taphonis can be generated by weathering under the soil surface and subsequent exhumation by erosion (Dragovich, 1969)."

-Smith (1978) "The origin and geomorphic implications of cliff foot recesses and tafoni on limestone hamadas in the northwest Sahara" Zeitscrift für Geomorphologie, 22, 21-43.

It is called preferential weathering, but there is another element at play. Before the rock eroded into circular features, there were softer materials present. Those softer materials weathered away first leaving the more resistant host rock (or matrix) behind. The matrix is harder than the softer "clastic" material. When pebbles get washed into the cliff face, the pebbles will slowly break down the softer material first and eventually the wave-action of pebbles will continue to grind as they spin and get rolled around in these little crevasses, which can grow in size as is seen in many Tafoni rock faces.

Here are some pictures of a supposed tafoni in Finland (a natural 23 m deep hole in bedrock in the municipality of Jalasjärvi).

If you wish to see the place, come within seven years from now since the rental of the place elapses after that date.

Not the answer you're looking for? Browse other questions tagged geology rocks geomorphology erosion weathering or ask your own question.

9
How did sand dunes appear in the midst of a fertile region?
8
What is this strange formation near Râmnicu Vâlcea?
0
How long will it take for the ocean to erode Rockall?
3
What is the purpose of analyzing the bed-load of a river?
1
What is the erosion rate of mountains?
3
Formation of Iceland