I've recently listend to a talk of Prof. Gernot Patzelt, Austrian Geographer and High Altitude Mountain Researcher. In this talk he describes that scientists find rests of trees and moorland apearing under the melting ice in the alps (Source: https://www.eike-klima-energie.eu/tag/patzelt/?print=print-search). He concludes that it must have been much warmer in times when mankind was not yet able to bring CO2 in the atmosphere and there is no causal relationship between the melting of the glaciers in the alps and the amount of CO2 in the atmosphere.

These arguments are used by a lot climate-change-sceptics. This is why I'm looking for counter-arguments for this line of argument. As far as I can see melting glaciers can be one indication for a regional or global warming, no matter what's the reason for that warming. So I guess he mixes up indications for a warming with the proof of causality (CO2 -> global warming)? Correct? Any other ideas?

He doesn't seem to be using the existence of the trees to argue against AGW. It was warmer:

The Holocene Climate Optimum (HCO) was a warm period during roughly the interval 9,000 to 5,000 years BP Wikipedia He complains about a lack of correlation over the 60 years preceding 2010. He is still active, mentioned in this article.

There is no doubt that increased atmospheric carbon dioxide has a greenhouse effect and that global cooling decrease the rate of atmospheric carbon dioxide. More CO2 makes it warmer and the warmer the more CO2 is released from the sees. And opposite, cooling decrease the rate of CO2 which makes it cooler. This amplifying feedback could explain a good deal of the short time irregularity of global temperatures.

As it seems we are heading for long time global warming since about 20,000 years or so. Historically the warming periods rather rapidly turn into cooling periods, both in short and long time perspective. What has happened in the last 150 years is that industrial emitted CO2 has reached really extreme levels on the top of the natural global warming, at the same time that the temperature anomalies is very high. And this is alarming. 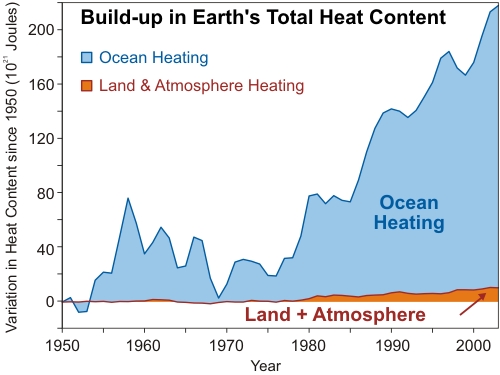 Glacial melting is not only depending of human activities, it naturally suppresses the naturally occurred CO2 amplified feedback and should be expected to alter, but since 1970 the ice is rapidly melting all around the world.

If we are lucky, the industrial emissions is responsible for all this warming and melting. The worse alternative is that the 3 million year record of atmospheric carbon dioxide is going to act upon the top of what is already alarmingly high.