Is there a place where the sea floor descends into the mantle of the earth?

My understanding of plate tectonics is that in the middle of the oceans magma rises from the mantle of the earth, cools and then spreads out, building up the sea floor. These places are pretty obvious because they have lava coming out of them.

On the other hand, there are places that sink into the earth, subduction zones, where the reverse happens; the existing crust slides into the mantle. Is there any place where this is visible, like the lava, or does it only take place invisibly far below the surface?

For example, let's say I have an object, like a shipwreck hulk. If I put the hulk on the sea floor in a subduction zone will it get sucked into the earth and vanish? If so, how long would it take for it to disappear?

The subduction zones are more easily spotted by the phenomena they cause in the subsurface than their features on the surface. I found this schematic image which shows almost all the features, from https://www.researchgate.net/publication/318684905_The_Nahuel_Niyeu_basin_A_Cambrian_forearc_basin_in_the_eastern_North_Patagonian_Massif : 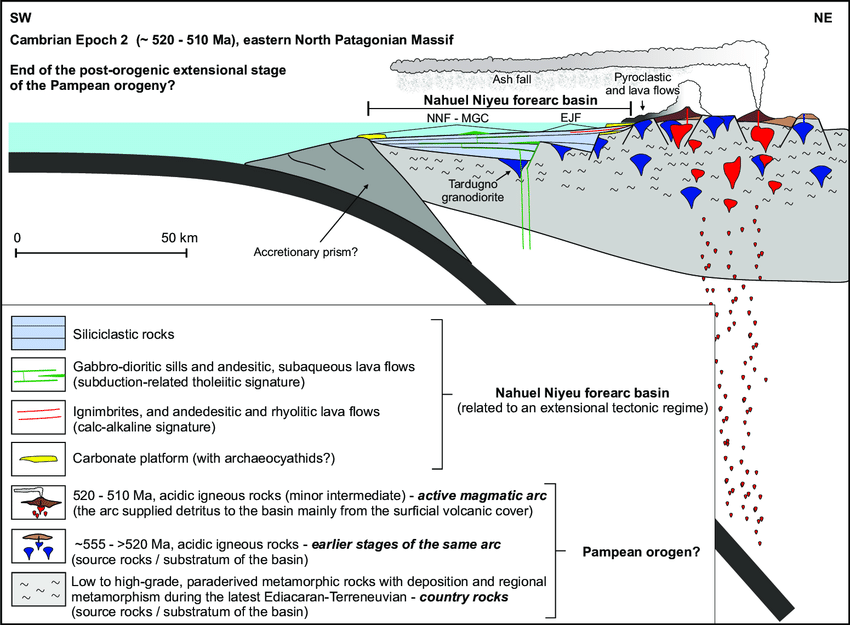 So what you see is the thin black plate subducting under the grey continental rocks. There are two features that it causes in an indirect way.

The reason why we don't see the actual subduction happening with our own eyes is because of the formation of the 'accretionary prism'. This is the triangle-shaped feature on the figure. It consists of sediment that is held on the interface between the moving oceanic plate and the stationary continental plate. It's a bit like a bulldozer. Hence, the real subduction action is covered by kilometers of piled up sediment! The deepest natural trench in the world, the Mariana Trench, is only about 11 km deep, while the continental plate is probably at least ~40 km deep. Hence, we don't really see the actual subduction in action...

If you have a shripwreck hulk and place it in the Mariana trench, it will get covered with sediment with a speed of ~0.02cm/year, so assuming your ship is about 30 meters high it will take 150 000 years before it is covered and can become part of the accretionary prism. Then it has to be dragged into the Earth somehow. The Nazca plate moves at ~5 cm/year, so it'll be moved by 7.5 kilometers forward. As I wrote, it'll have to subduct at least 30 more kilometers before it's below any continental plate, which would take at least 600 000 years at the speed of the plate motion, and assuming that it somehow moves at the same speed as the crust rather than getting bulldozered into the accretionary prism. In other words, it would probably take much much longer in practice before it reached far enough down. As said, that means that in the meantime your space ship will have been chemically weathered and mechanically deformed (by the enormous mass of sediments), and won't really be recognizable as a space ship anymore!

Subduction zones are only observable indirectly through the typical volcanos in these regions (stratovulcanos like Krakatau or Pinatubo on the surface of the continental plate). Another form of typical subduction volcanos are the "Petit Spots" only described for the first time in 2001 by geologists from Japan. These litle volcanos appear under the water surface on top of the oceanic plate at the outer bulge of the oceanic plate. This is because the real subduction area lies normally about 3000-4000 metres below the surrounding ocean surface and is covered with sediments. In most cases subduction is not a smooth and steady process but it proceeds with bigger or smaller earthquakes, depending on the material of the plates.

That means if you drop your spaceship in that zone it will be covered with a huge amount of sediments through the centuries, while at the same time these sediments in the deep sea trench compress the spaceship to a nice geological singularity. By the time it reaches the contact zone between oceanic plate and the continental plate it will be destroyed and with every little tug of the next earthquake it will be more pulverized and transported some centimetres further under the continental plate...

17
How did Earth's plate tectonics start?
25
During the “Ice Ages” or “Snowball Earth” times, where was all the energy?
8
What are the geological mechanisms for sea floor spreading in the Bismarck Sea?
5
Is there evidence to delineate where a southern extension of the East African Rift 'plate boundary' is developing?
14
Is continental drift caused by lava pushing the seabed apart?
9
where are the thickest limestone layers on earth ? (CaCO3)
5
If we assume the mega impact hypothesis for the formation of Moon, where on Earth is the impact point?
0
How is the difference in crust and mantle composition explained?
0
How have Farallon plates's remnants stayed as they were inside the mantle?
3
Do tectonic plates “float” over the mantle and “collide” like icebergs?