What is brown carbon?

There is a lot of interest in brown carbon in the atmospheric science community these days. There is a paper in the journal, "Atmospheric Chemistry and Physics" titled, "Black carbon or brown carbon? The nature of light-absorbing carbonaceous aerosols" by M.O. Andreae and A. Gelencser, which was published in 2006. However, after reading this paper, I feel more confused than before.

My second question is, "What is the need to separate brown carbon from black carbon?"

meteorology atmospheric-chemistry atmospheric-radiation
Share
Improve this question
edited May 30, 2019 at 16:59

Carbonaceous aerosols are formed by a mixture of substances with different chemical, physical, and optical properties.

Light absorbing carbonaceous aerosols do not form a uniform group either. They include soot particles, smoke, organic compounds such as levoglucosan and the spectre of humic substances all with different optical properties. The figure below shows schematically the absorption spectrum of two compounds representative of different groups of light absorbing materials. 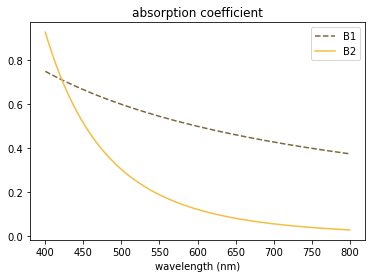 One compound labeled B1 has a more uniform distribution of absorption coefficient across the visible spectrum where the absorption coefficient at the red edge is about half of that at the blue edge. Another compound labeled B2 has a much steeper slope at the blue edge. It would have a yellowish or light brown color. Think of the yellowish fumes that can be seen when a piece of wood is ignited.

Not the answer you're looking for? Browse other questions tagged meteorology atmospheric-chemistry atmospheric-radiation or ask your own question.

4
How much do anthropogenic carbon aerosols (soot) affect the atmospheric radiation budget?
5
What is the difference between a carbon sink and a carbon reservoir?
6
What is the ratio of infra-red light absorbed by green house gases?
5
What would a planet's sky look like with different chemical compositions, such as low nitrogen, high methane etc?
4
What is radiation divergence?
5
How much and what kind of radiation passes through a cloud?
4
What exactly are "ambient aerosols"?