Is there a hemisphere where there's more land than ocean?

From a previous question, around 40% of the northern hemisphere is land. Would there be a plane splitting the earth into two equal parts, where in one part there are more land than ocean?

I wrote a little Matlab script to estimate this approximatively. Here is the result: colour denotes the total land area inside the hemisphere centred on a particular surface point. The red point is the maximum.

This gives me a maximum for the hemisphere centred on 1.7582°W longitude and 40.7692°N latitude, roughly in Guadalajara, Spain. If I calculated right this is 81% of all land, with 23.37% land area on the hemisphere (and 5.83% on the other hemisphere). So the answer to the question is no, there is no hemisphere with more land than ocean. There isn't even one with more than half land. 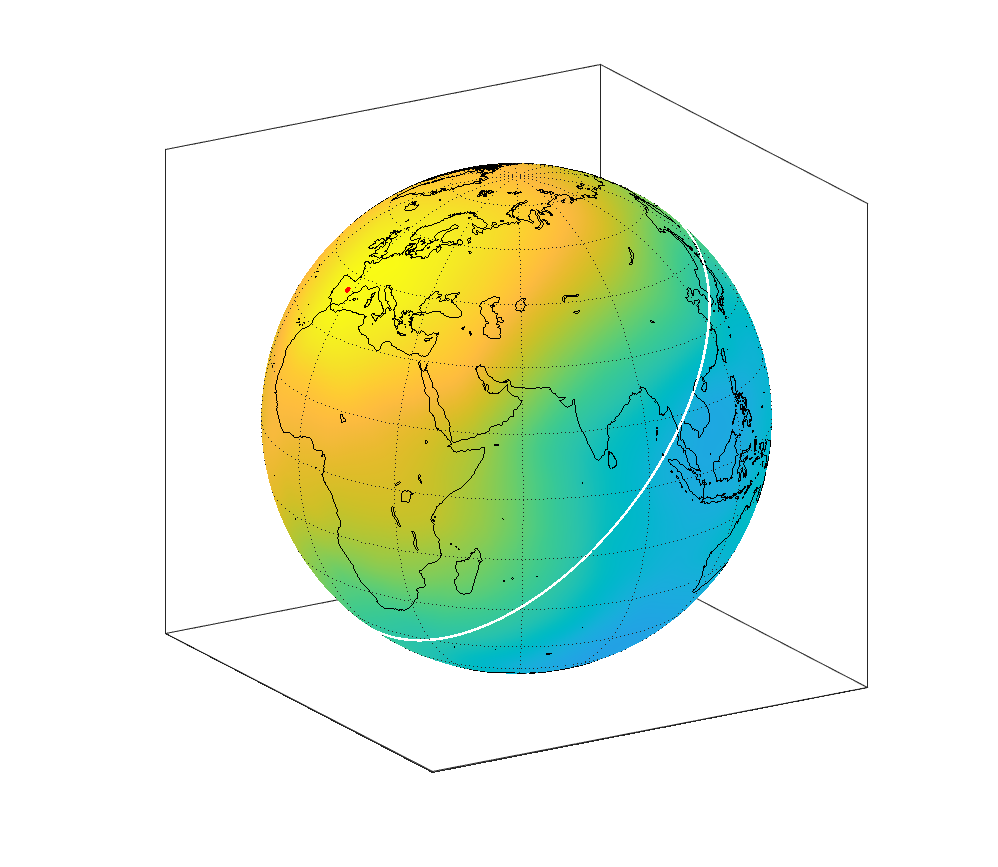 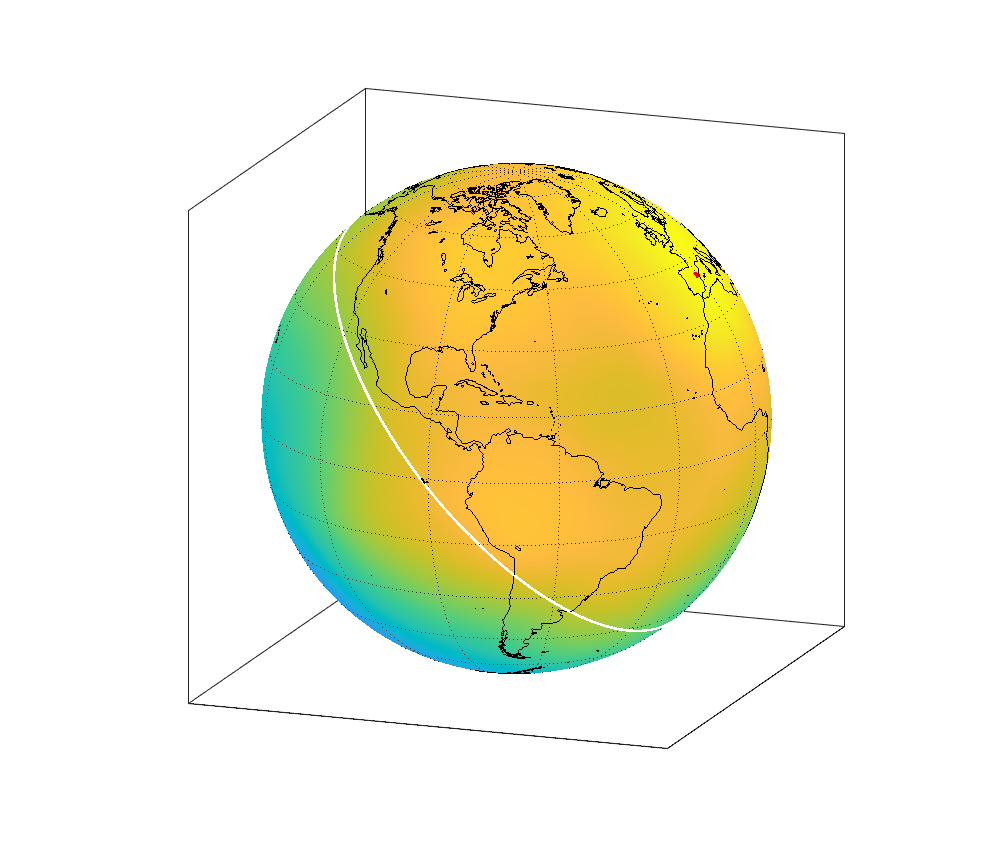 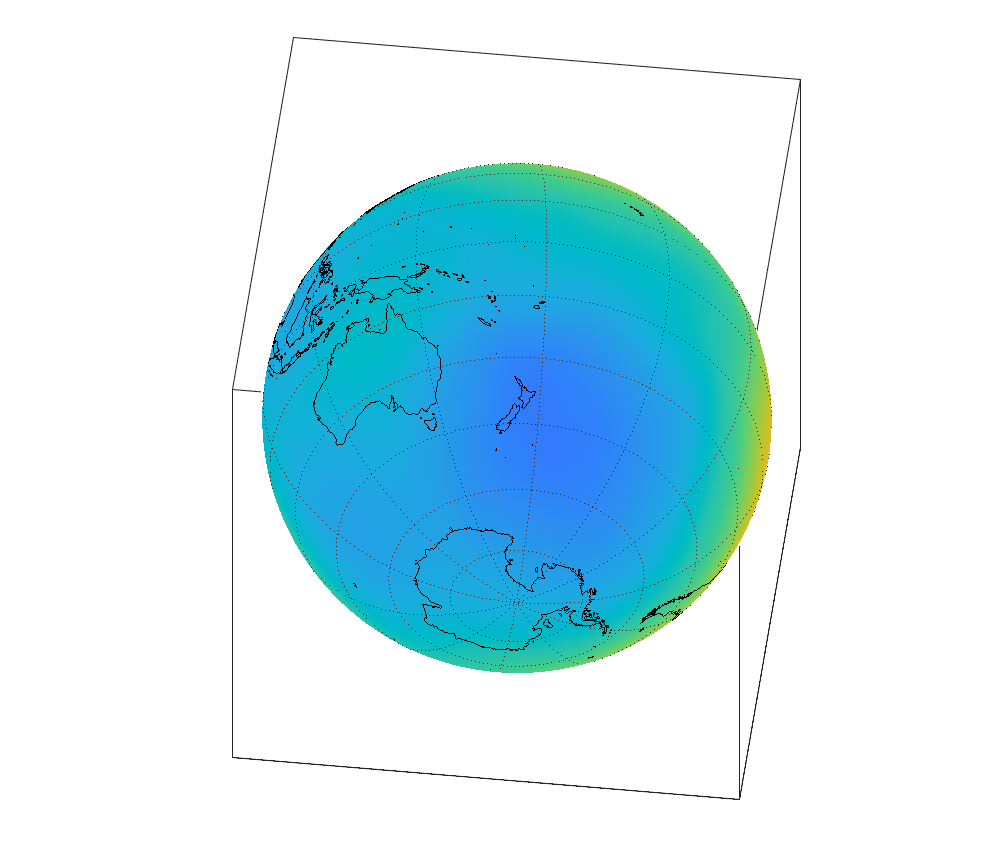 (Updated 2019-06-23 with higher resolution estimation, which moved the point south a bit.)

Now for the ease of understanding, what does 25/29 of total land area means? It approximates to 86% of the total continental surface area.

Now on analyzing this, it's possible to conclude you won't be able to get such a hemisphere using a plane along the longitudes.

If you try to create a hemisphere using a plane that cuts through 60˚S and 60˚N latitudes, you might be able to have most the major land together areas except Antartica and Australia and some parts of Africa in it. Still, it won't be enough to have more than half of that hemisphere with land covering it.

So, my conclusion is it's not possible to come up with such a hemisphere. :)

Not the answer you're looking for? Browse other questions tagged geography land-surface or ask your own question.

2
How to orient a globe of the earth so that maximum land mass is visible?
12
In the northern hemisphere only, what percentage of the surface is land?

17
Percentage of dry land surface with sea level elevation lower than 1 km
8
Should total ground heat flux be 0?
16
(Why) Is there more landmass on Earth's Northern hemisphere than the Southern Hemisphere?
12
In the northern hemisphere only, what percentage of the surface is land?
6
What's the minimum number of days needed for reporting a "monthly average" of daily satellite retrievals?
1
Permafrost thickness
0
Other than the South Pole where is the windless place on Earth?
10
What are the sunniest places on Earth? (including oceans)