What are these underwater structures near 6°N 85°55'W

While google earth-researching the sea floor near Malpelo and Cocos Islands (Colombian and Costa Rican Pacific Ocean), I came along these strangely geometrical structures in the sea floor, located around 6°N, 85°55'W. I'm fascinated with the look and the geometric perfection they have, and have waited to ask this question for about 3 years, until today that I realized there's a Stack Exchange site dedicated to earth sciences (I'm not an earth scientist, just a maps enthusiast). 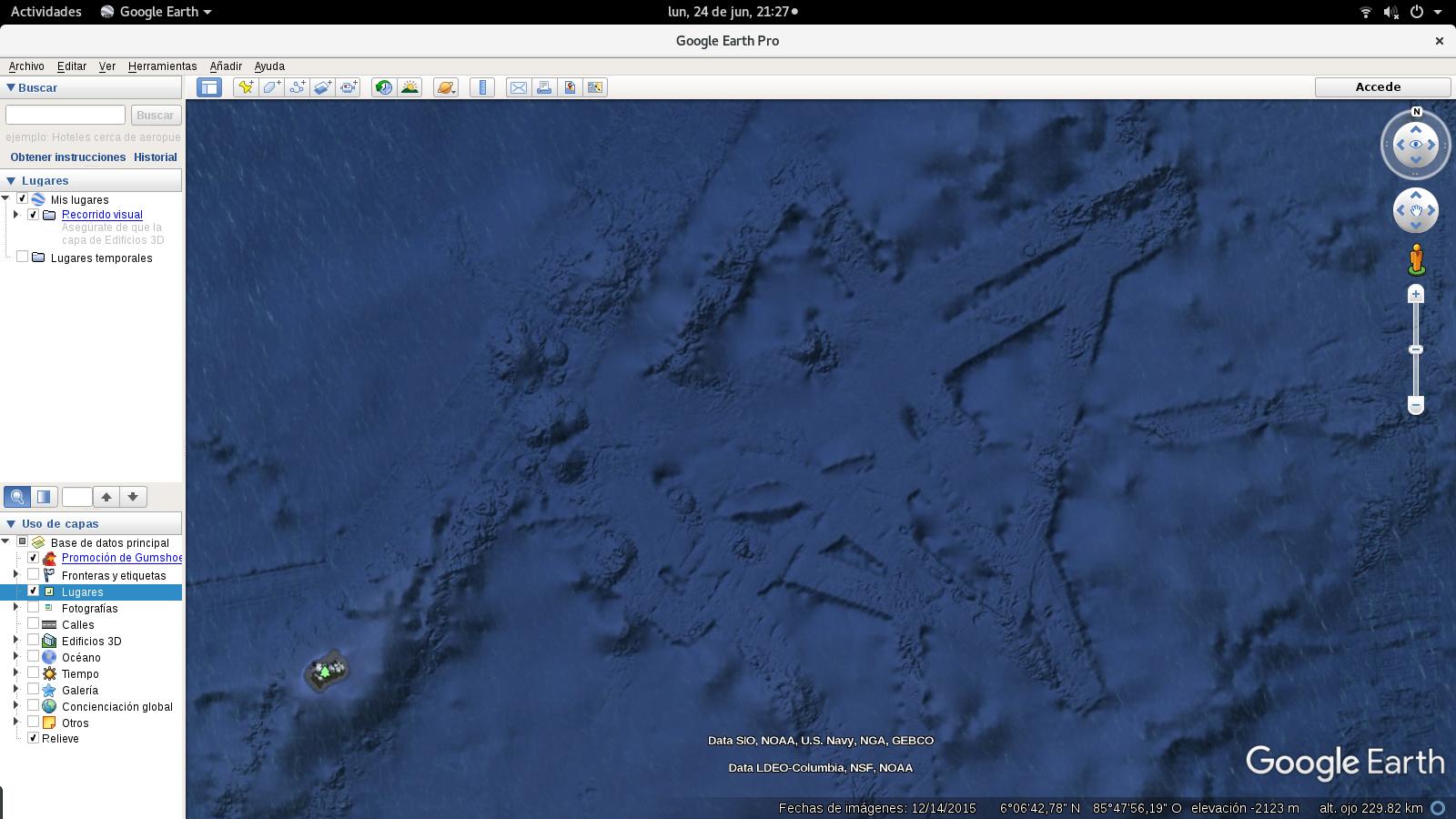 At first I thought they could be due to the path the satellite was traveling at the moment the image was captured, but then I realized there are depth differences in excess of 300m. I find the paralelism of the lines that form the "beams" surprisingly perfect, and the width of the "elements" very consistent (about 7 to 8km, according to google earth's ruler). Near 6°22'N 85°45'W there's a circular "dent" of about 4 $km^2$ that is very perfect regarding ovality.

I found something similar about 670km NE from there, around 11°10'N 82°41'W (160km SW from San Andres Islands, in the Colombian Caribbean). While the structure here is less complex (there's only one "beam" and a concentric circular structure), the width of the "beam" (6km) seems similar to the one near Cocos (the depth differences range between 300 and 500m from the structures to the normal sea floor). 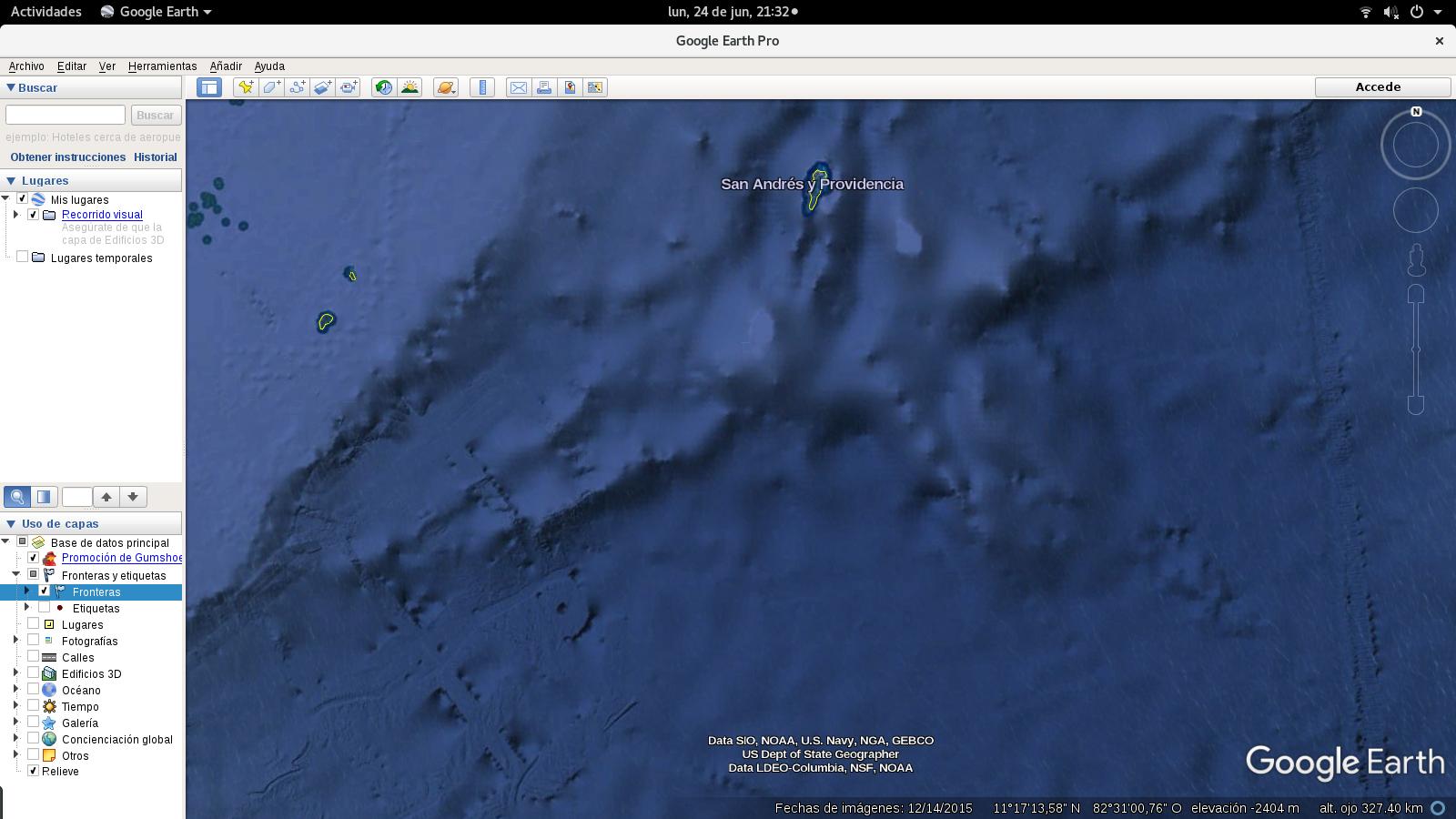 What are these things?

Are they glitches in the images from the satellite, that coincidentially look like beams? If so, why are depth differences so significative?

Are they rocks or some other kind of geological formations? How did they get that shape, and where else cand I find more similar?

As the other answer suggests, these are sonar surveys of the ocean depths. But the answer is a bit more complicated.

The vast majority of the ocean floor has never been mapped. We really only know about the water depth because the water above the sea floor is lighter than if it were rocks. So a deep ocean produces less gravity than a shallow one. And, miraculously, you can fly satellites over the oceans that pick up on how hard Earth pulls on the satellite at any given point and convert that data into an ocean depth.

This is what Google Maps and other mapping services show by default. The problem is that this information is not very accurate: That's because not just the point immediately under the satellite pulls on the satellite, but also points elsewhere. So a very steep undersea mountain will not be distinguishable from a broader but less high one. This is why in general these images of ocean depths are not shown in high resolution -- we just don't know the depth of the ocean on length scales of a few kilometers.

But then along comes the occasional ocean survey. (Think: Research ships, the ships that lay undersea cables, the ships that search for ship wrecks or the occasional plane that fell from the sky.) They tow a sonar array behind a ship, or send a side-scan sonar equipped submersible, to actually map the ocean floor on length scales of a few dozen meters. For map services, this presents a conundrum: They'd like to show the more accurate sonar data where it is available, but they need to overlay it on the low resolution maps that comes from satellites.

This is exactly what you see here: The background is the low-resolution satellite map. Overlaid is the high resolution sonar data. At the edges of the sonar maps, these two maps won't match, and so you will see the sharp edges. You can see the different resolutions if you zoom in and out of the view you showed.

(Given the long straight tracks of these sonar maps, one can guess that in your view, these were created by surveys for laying undersea cables, for example to the Galapagos Islands.)

Supplementing Wolfgang's answer, here's a National Oceanographic and Atmospheric Administration story that talks about the appearance of ocean-bottom artifacts:

With legions of people around the world now exploring the seafloor, many are noticing locations along the ocean bottom marked by mysterious formations of grid-like artifacts. These formations look like they were made by humans, leading many to ask if these areas could be lost cities or underwater streets.

While these formations are human-made, they are only made of data. In other words, there are no physical lines on the ocean floor. These lines are artifacts of the ocean floor mapping process.

Much if not all of Google Earth's seafloor data comes via Scripps Institution of Oceanography, which combines both gravity data from satellite missions and sonar scans from sources that make their records available. Oceanographic vessels tend to travel in straight lines and/or criss-cross patterns and collect high-quality sonar data while they're doing it, resulting in strips of detail that look much different from the surround sea floor.

Not the answer you're looking for? Browse other questions tagged satellites sea-floor ground-truth satellite-oddities or ask your own question.

5
Why does the ocean floor look so scratchy?