As described in the question there are two similar coils, one radiates the AC magnetic field ("transmitter") and the other picks up the weak radiated AC magnetic field produced by subsurface electrical currents induced by the primary field.

There are two modes of operation. The following two figures are from Section 4.1 of GEONICS Technical note #6; Electromagnetic Terrain Conductivity Measurement at Low Induction Numbers. (more technical notes here) In both figures the two coils are separated by a horizontal distance $s$ which is typically a few meters.

In Horizontal mode the axes of the two coils point in the horizontal plane. In this orientation the sensitivity always peaks near the surface, and falls off to about 30% at a depth of $0.4 s$.

In Vertical mode the axes of the two coils point "up" or vertically. In this orientation the sensitivity is low near the surface and peaks at depth of $0.4 s$.

In either case, if $s$ is twice as big (the coils are twice as far apart) these two shapes will be stretched by the same amount. If $s$ is 2 meters, the vertical method will have peak sensitivity at 0.8 meters. If $s$ is 5 meters, vertical sensitivity peaks at 2.0 meters.

That article also links to Comparison of the EM38 and EM38-MK2 electromagnetic induction-based sensors for spatial soil analysis at field scale which may cite further references but it's paywalled.

I can't come up with a simple model for why this is true, so I'll have to read further. It's possible someone else will be able to provide a better answer. I think it's related to how the phase of the signals are process, but I'm not sure about that yet.

However, the Computers and Electronics in Agriculture paper Accuracy issues in electromagnetic induction sensing of soil electrical conductivity for precision agriculture (also available here) K.A.Sudduth, S.T.Drummond and N.R.Kitchen, Volume 31, Issue 3, May 2001, Pages 239-264 https://doi.org/10.1016/S0168-1699(00)00185-X happens to give equations for these shape, and a clue to where these are from. 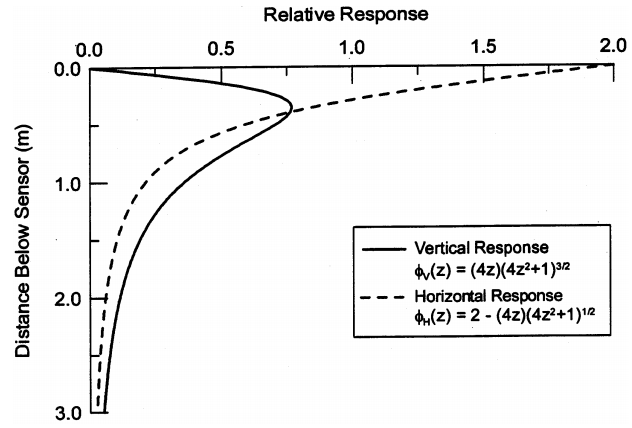 Those equations are close but $\color{red}{wrong!!}$ they are missing a division "/" sign.

Fig. 2. Relative response of EM38 sensor as a function of distance (adapted from McNeill, 1992).

The equations in the figure have obviously been typed incorrectly, but if I make some simple adjustments they work nicely

where z has to be unitless, so is almost certainly given by:

where $s$ is the separation between the two coils as before. 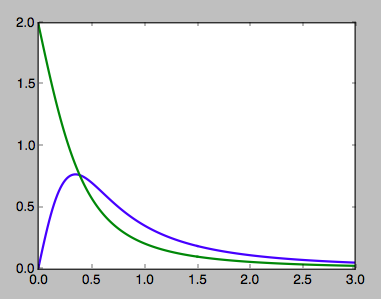 Not the answer you're looking for? Browse other questions tagged geophysics measurements electromagnetism field-measurements or ask your own question.

3
What instrumentation and/or measurement is likely being shown in this video of giant Siberian craters/sinkholes?