Is this series of earthquakes near Broome, Australia normal?

There have been a series of earthquakes (some strong) near Broom, Western Australia. See this screenshot of the Geoscience Australia earthquakes map:

I didn't believe there were any faults around this area, or any apparent risk factors for strong earthquakes. Is the strength and number of these earthquakes normal normal, or is something odd happening here?

Are you confusing faults with tectonic plate boundaries?

Australia is in the middle of a tectonic plate, but there are countless faults within the plate, as within all the other plates. Each plate is stressed & eventually rock adjacent to some faults moves resulting in a intraplate earthquakes.

Broome is not all that far away from a plate margin. About 300 miles north of Broome the Australian plate is slipping beneath the Eurasian plate, and this is most likely what is causing the earthquakes. Aftershocks are common after earthquakes, so this is probably what causes the cluster. If such earthquakes are vey infrequent near Broome, that is perhaps because the Australian plate is moving very slowly. Friction sometimes halts it in places and tension builds up as it I tries to move forward but is prevented. When the friction is no longer enough, something gives, and that part of the plate lurches forward again.

Actually, there is a shear zone in NW Australia. The Australian plate is somewhat stuck near the Timor Trough but keeps subducting in the west near Java. This naturally cause shear stress to accumulate in NW Australia which has to be eventually released as strike slip earthquakes. 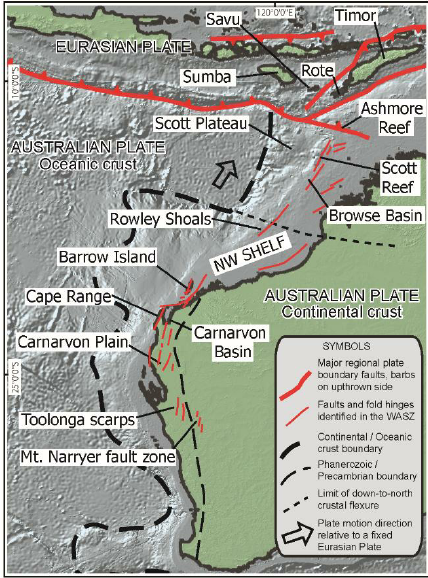 5
Are there more earthquakes near the equator or poles?
15
What does it mean when the depth of earthquakes get near the surface over a period of time?
9
Can earthquakes affect the atmosphere?
4
Can two earthquakes happen at the same time?
0
Earthquakes PGA/PGV in time?
15
Did the Geothermal Power Plant contribute to Pahoa's Lava Fissures?
4
Catalog of all significant earthquakes since 1900?
4
Are Indonesian 2018 earthquakes related?
0
Why is it hard to predict earthquakes?