Is this particular multiple rainbow unexplained by science?

The gist of the BBC News article 'Incredibly rare rainbow' photographed in Highlands is that while it has several familiar features, there are aspects that are still unexplained.

Question: Are there really aspects of this particular multiple rainbow that are currently unexplained by science? 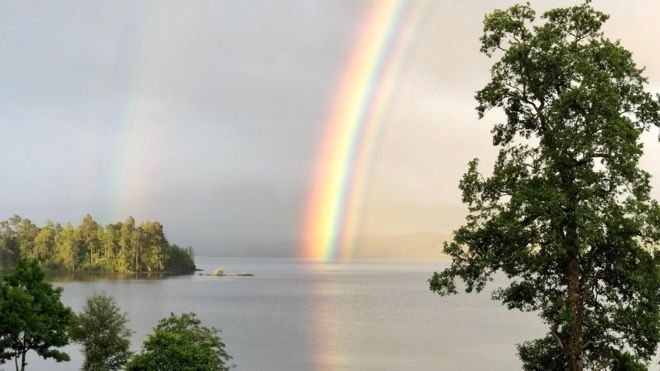 The rainbow was photographed at Loch Lochy in the Highlands, SAXAPHONEJAN/BBC WEATHER WATCHERS

Unusually, the colours of the third rainbow are in the same order as the main one it was attached to.

BBC Weather presenter Simon King said: "This has scratched a few heads as this is something incredibly rare."

The meteorologist said the rainbow had the characteristics of both of what are known as a twinned rainbow and supernumerary rainbow.

Supernumerary bows are formed by small, similar-sized raindrops which then create ripple-like rainbows.

There's nothing inexplicable about that photo. It's got a few uncommon features, but nothing unknown. In the image below, I've drastically distorted the brightness curve to make things more obvious: 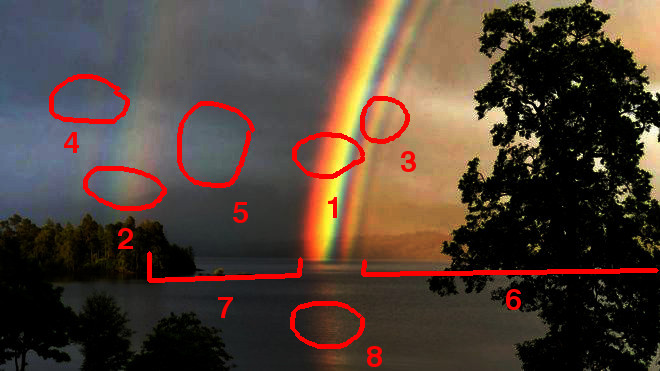 The "third rainbow" the BBC is talking about is probably the first few supernumerary arcs of the primary arc. Supernumerary arcs have the same color ordering as the arc they're attached to, but because the brightness and width of the arcs varies, and because they're usually pastel colors rather than spectral colors, it can give the appearance of a reversed spectrum.

9
How do I prepare for the International Earth Science Olympiad?
3
Why do clouds have areas of darkness instead of scattering light to produce a rainbow?
7
What causes a rainbow, its colours and its shape?
3
Explanation for single rainbow that contained colors several times
5
What actually happens to reduce the perceived color in a 'white rainbow“ or ”fog-bow"?
6
What mechanism leads to these spectacular iridescent patterns in clouds labeled as a “Fire Rainbow”?
3
What might be causing this rainbow-like effect on the ground?
6
Help understanding this image of an unusual double reflected rainbow
3
What causes this arc in the night sky where the background is brighter on one side than the other?