A better way to prevent ice shelf from melting and raising ocean levels?

I just read this article by scientist who propose making giant snow machines to basically move the eroding ice shelf further inland. It’s been described as pretty much cost prohibitive (despite saving the coasts from rising water levels??) and would be on the same level of effort as putting a base on the moon.

So instead of doing that, why not drill a large hole straight down into one end of a section of the ice shelf (closest to land but still a thick part of ice) and insert a large tap and then use large fresnel lens to melt a slope in the ice and funnel the melted ice into the hole and out the spout to be diverted further inland which would eventually refreeze later?

You would just have to melt the section of the ice shelf at a graded slope so that gravity does all the work. If you look at how water towers work and then consider the thickness of the ice shelf, you could calculate amount of water pressure and will see that it would suffice to move large quantities of water at a very fast pace.

The problem is that "inland" is uphill from the sea. If you can cause gravity to make water flow uphill, you can solve many more problems than just sea-level rise.

Without coastal protection, the global cost of damages could reach US$50 trillion a year. Sea walls and flood defences cost tens of billions of dollars a year to construct and maintain.

At this price, geoengineering is competitive.

Any project would require a massive industrial infrastructure in an inhospitable environment supported by billions of dollars in planning, development, and operation.

Moving ice mass inland by pumping, as you propose, would also require a method to melt ice in a sub-zero environment, capture and store the meltwater, and then transport the meltwater tens or hundreds of miles uphill across a frozen landscape. 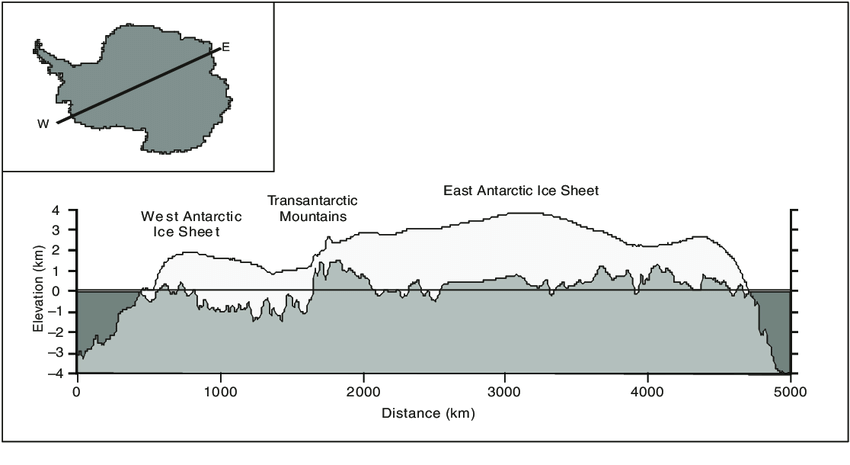 As for pumping seawater into low-lying land areas to counter sea-level rise, that's also infeasible: It would require a constant pumped flow equivalent to some of the world's largest rivers, and even then some of that effort would be undone by evaporation.

I don't think what you suggest could be done economically. A much better way of reducing sea level would be to siphon the ocean into the numerous low lying areas of the world which are below mean sea level, for example, the Aral sea in Uzbekistan, Lake Eyre (Kati Thanda, indigenous name) in Australia, the Fayum Depression in Egypt, and there ore many others.

This would restore the waterborne transport system of the Aral, restore the fisheries, put an end to the windblown salt which is contaminating agricultural land in the area, and probably alter the climate for the better, as well as making a start on reducing mean sea level. You wouldn't even need pumps, because the siphon principle that water always finds its own level is enough to move the water. When we have refilled the Aral, we could start on some other low lying land area, perhaps Lake Eyre.

Not the answer you're looking for? Browse other questions tagged ice-sheets or ask your own question.

0
Hypothetically, would digging a big trench from the ocean and flooding desert areas be a bad solution to combatting sea level rise?

9
How are the thickness of ice sheets from previous glaciation periods determined?
9
What evidence is there linking melting ice caps and changes in tectonic movement?
11
Glaciology: odd pattern of smooth and ribbed chunks of ice in Antartica
7
What is more important in Antarctica calving or basal melting of the ice shelves?
11
Will increased precipitation in Antarctica prevent sea level rise?
5
Would the enthalpy of fusion for melting ice fields be a causative factor for colder winter weather?