What is the History of the Brooks Range?

This here is a map of the Brooks Range in northern Alaska: 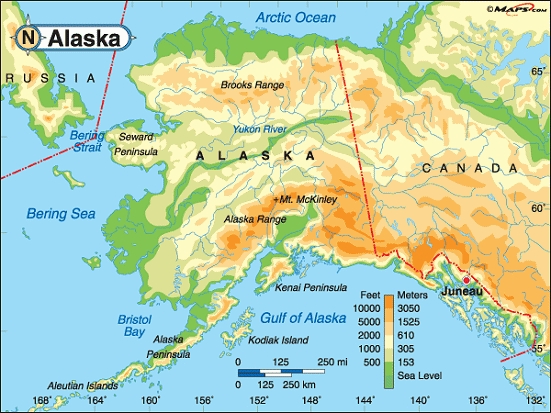 As you can see, it is an inland range shaped in a downward curve. Why is that? What is the history of the uplift of the Brooks Range? How and when did a piece of sea or lowland rise up into a downward-curving mountain range far from the coast?

If you extend your map out a little bit further, you will see that the Brooks Range is just a continuation of the Rocky Mountains into Alaska.

The Brooks Range was formed at the same time as the front ranges of the Rockies in Canada and the Lower 48, during the Laramide Orogeny which lasted from abut 80 million years ago to about 35 million years ago. This was caused by the subduction of oceanic plates (mainly the Farallon Plate but also the Kula Plate, and to a lesser extent, the Pacific Plate) beneath the west coast of North America.

The Farallon plate went under North America at a shallow angle; because of this, a large part of Western North America was uplifted, deep into the continent, with faults pushing ancient basement rocks up where the Front Ranges and the Brooks Range are today. 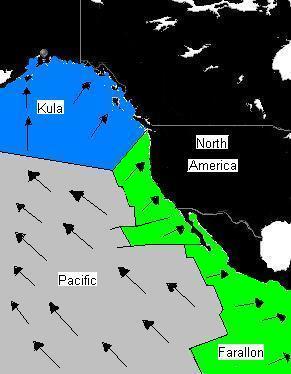 The Kula plate is "all gone", and the Farallon Plate is mostly gone, except for a few remnants like the Juan de Fuca Plate. Because of the different direction that the Pacific Plate moves, subduction ialong the West Coast is mostly gone as the Pacific Plate slides past North America. The shallow subduction that created mountains deep in the interior is done. A subduction zone further west has created the Aleutian volcanic arc, but this is a much steeper subduction.

Not the answer you're looking for? Browse other questions tagged geology mountains mountain-building or ask your own question.

11
What is the tectonic setting for the formation of the Great Dividing Range in Australia?
6
Why are parts of the Atlas Mountains in Morocco flat?
2
Is plate tectonics a hoax theory? How can tightly packed plates move?
6
What separates the Karakoram Range, the Hindu Kush, and the Himalayan Range?
12
Why is the diurnal temperature range on the Cascade volcanoes so small?
5
Are the cores of every mountain range igneous?
2
What is the history of atmospheric O₂ concentration?
5
Could the speed in which the plate is moving affect how quickly mountains rise?