How have Farallon plates's remnants stayed as they were inside the mantle? 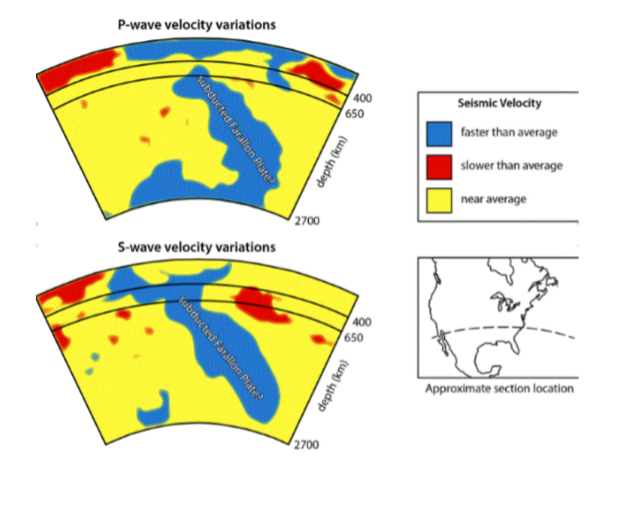 Why hasn't the subduced Farallon Plate's materials been recycled? Why do they appear to be flowing in a molten state?

Rock is dense, is a good insulator, and usually has very high specific heat capacity; the crust is also kilometers thick. The combination of these qualities means that it takes a very long time, even geologically speaking, for crustal blocks to melt completely in the mantle. This is exacerbated by the fact that the mantle, especially the shallow layers close to the crust, is not actually much hotter than the melting point of most of the minerals in the rocks.

The reason that the crust is still visible in seismic wave variances while it moves in an apparently molten fashion is that even though it hasn't been completely melted it has been in the mantle long enough to reach a uniform high temperature, high enough to become plastic and flexible. So it still presents as a density anomaly because its not yet as molten as the material around it but it will flow, if slowly, because it is semi-molten, similar to the asthenosphere.

12
Are mantle plumes distributed around the core randomly or in a known pattern?
14
What are the causes of the supercontinent cycle?
14
Is continental drift caused by lava pushing the seabed apart?
6
How can we have "floating" and convection currents in a non-liquid mantle?
8
How did the Ural mountains form?
6
How can linear oceanic ridges (like the East Pacific Rise) be explained by single point mantle plumes?
3
Do tectonic plates "float" over the mantle and "collide" like icebergs?