But for NASA in particular, you have in their official website Global temperature a graph called "GLOBAL LAND-OCEAN TEMPERATURE INDEX" which measures "temperature anomaly", which shows for the 2 years the temperature going up.

My question is, and even more considering both websites share one of their sources,

Did global temperature increase or drop in the last 2 years?

Did global temperature increase or drop in the last 2 years?

Before I answer the question, I need to add the caveat that climate change does not say that every year will be warmer than the previous one. Events such as El Ninos and La Ninas can make the global temperature spike or drop in any one year. The Pacific Ocean dumps huge amounts of pent up heat into the atmosphere during El Nino events.

2019 most likely will not be warmer than 2016, but it might well beat 2015 as the second warmest year on record. And that is without the help of a massive El Nino event.

First we should be clear on what is meant by "global temperature". Averaged global surface air temperatures have become the most commonly used metric for the state of our global climate and get called "global temperature" but it is not an absolute measure, is not a direct measure of global climate change and it is not the only measurement that could be used. It does have the advantage of drawing on temperature records going back to before 1900. Surface air temperatures are only a good indicator of climate change when averaged over periods long enough that short term and recurring variability does not distort any calculation of trend.

This graph shows an ongoing pattern of temperatures going up and down a lot - whilst still showing a longer term trend of temperature rise. 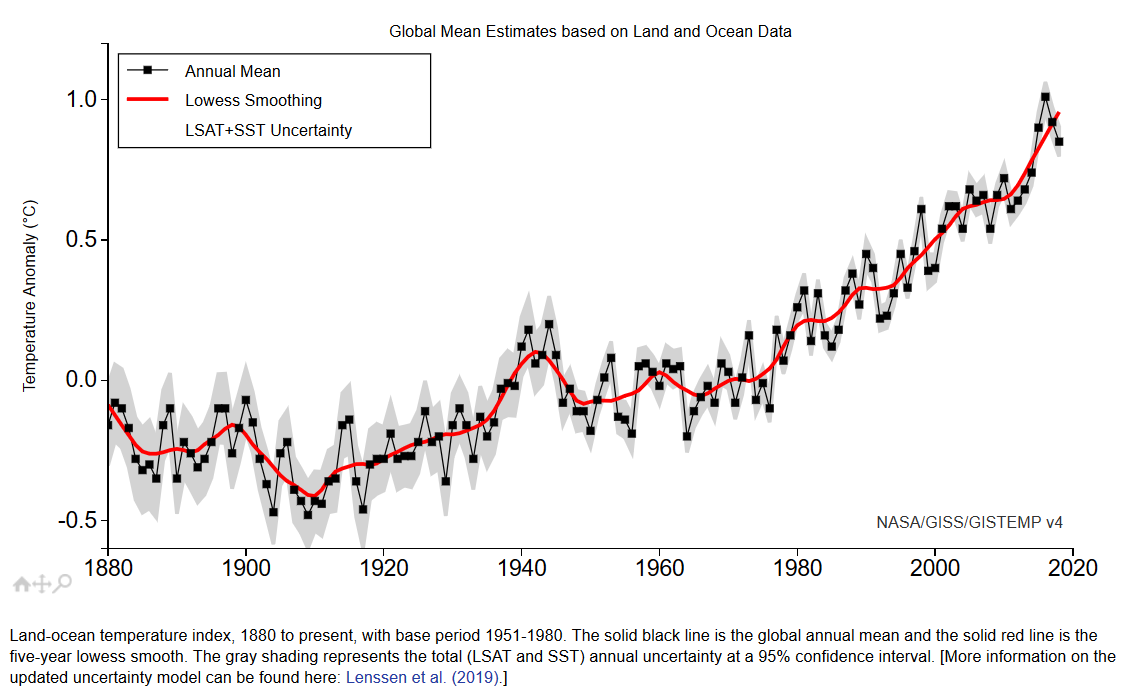 Average surface air temperatures vary widely from year to year - and yes, they have gone down 2 years running. Before that they went up for 5 years in a row. However this does not mean that there was global warming for 5 years and global cooling for 2 years; a clear underlying trend of warming (red line is smoothed 5 year running average) is there, and if anything it is shows faster warming, not slower.

Looking at a different measurement - This is global ocean heat content down to 2,000m depth - it shows year to year variation but much less. It does not show 5 years of Ocean heat content going up followed by 2 years of going down or even align closely with the variations in surface air temperatures but the same underlying trend of warming as in surface air temperatures is there - 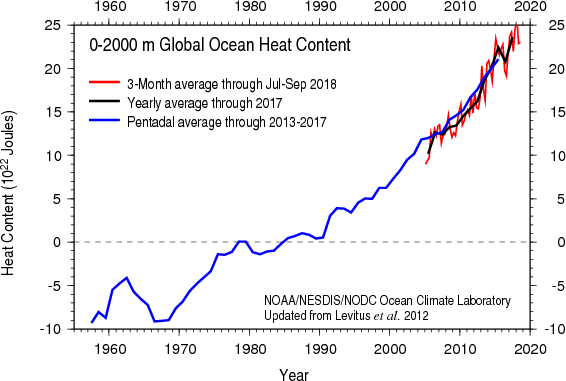 6
Why do winter temperatures account for most of the increase in global temperature?
10
Could this study "totally dismantle" Global Warming claims?
6
Debunking weather conspiracy with statistics - why does temperature rise then fall for last weekend in June in recent years
3
How to best visualize temperature increase (due to climate change) using GHCN data?
1
How much did the worst volcanic eruption in human history affect global temperature?
5
Is lower tropospheric temperature relevant to measure global warming?
3
Why does relative humidity drop if I open the window in winter? What about the temperature drop?