What does "glacier collapse" mean?

A staggering 250,000 cubic meters (8.8 million cubic feet) of ice could break away from the Planpincieux glacier on the Grandes Jorasses mountain in the Mont Blanc massif, experts at the Valle d'Aosta regional government and the Fondazione Montagna Sicura (Safe Mountain Foundation) reported in an analysis published this week.

While it's impossible to predict the exact timing of the collapse, observations in August and September showed that the glacier was shifting at a speed of 50 to 60 centimeters (20 to 24 inches) a day, experts said.

"These phenomena once again show that the mountain is going through a phase of strong change due to climatic factors, therefore it is particularly vulnerable," Stefano Miserocchi, mayor of nearby Courmayeur, said in a statement. "In this case, it's a temperate glacier particularly sensitive to high temperatures."As a precautionary measure, Miserocchi ordered the closure of roads in the Val Ferret valley and the evacuation of mountain huts in the Rochefort area.

The caption of the image in the link (shown below) is labeled Figure 22, so presumably it's from some much larger report.

I'm curious about the choice of the word "collapse". What is it exactly that the glacier might do? Will it collapse in the same way that a Soufflé collapses, or is this more like an avalanche, or does the whole glacier just start sliding much faster, like several meters per day instead of several tens of centimeters currently? 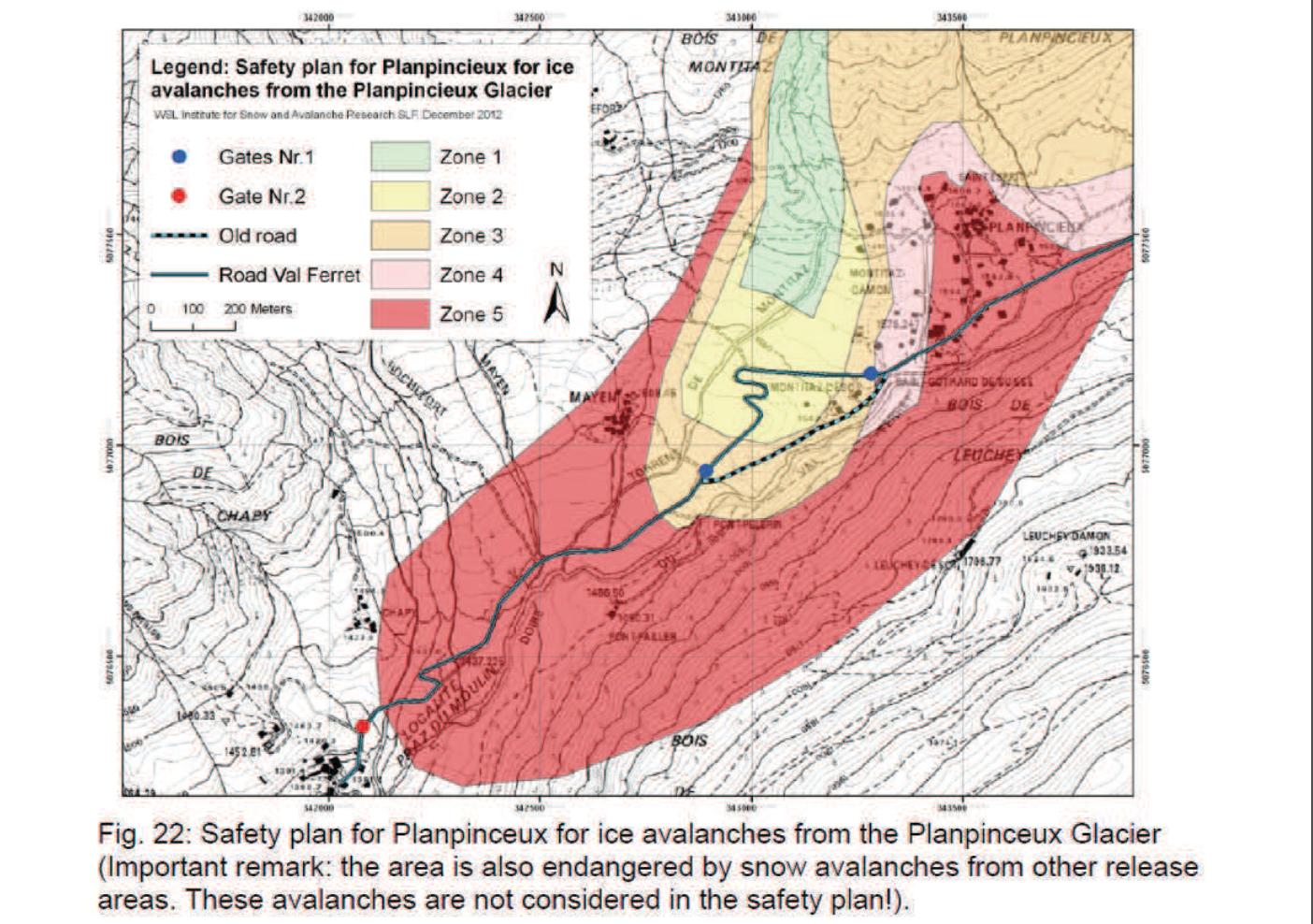 The word collapse is not appropriate in the case of a hanging glacier such as the one you mention in your question. A hanging glacier is a glacier that terminates at a cliff edge. Since glacier ice is constantly moving towards the cliff, the terminus will occasionally lose sufficient support and detach from the glacier causing an ice avalanche. As long as the glacier feeds ice to the cliff edge ice avalanches will continue to occur. How often will largely depend on the ice velocity moving ice towards the cliff edge. This is thus a natural behaviour and not a collapse, or at least not named collapse in glaciology.

The word collapse is not a scientific term and does not have a unique definition in glaciology. In the case of an ice shelf that suddenly breaks apart such as the Larsen B (Rott et al. 1996) the term collapse has been used in articles. In this case the event was sudden and the entire ice shelf broke up and was lost during a few months. At the same time collapse is commonly used to describe other phenomena such as the loss of an ice sheet or part of an ice sheet (for example, Brendryen et al., 2020). Such a process is much slower than the ice shelf collapse, perhaps lasting many hundreds or thousands of years. But the word is used because it describes an irreversible event or development.

So coming back to the hanging glacier, its avalanches is an ongoing process and the word collapse gives the wrong impression. The glacier is not collapsing. Given climate warming the glacier will likely decrease in size and the avalanching change, possibly stop depending on the bedrock morphology on which the glacier sits. If the climate warming causes the glacier to completely melt away, then that could be considered a collapse of that glacier. But when you read different scientific articles on glaciers you will see the word used in many different ways so a tricky word to use in a good and consistent way.

If an ice shelf collapses, the backpressure disappears. The glaciers that fed into the ice shelf speed up, flowing more quickly out to sea. Glaciers and ice sheets rest on land, so once they flow into the ocean, they contribute to sea-level rise.

It means that large parts might break off and cause an ice avalanche or series of avalanches which would go crashing down the valley, killing or destroying anything which got in its way.

Not the answer you're looking for? Browse other questions tagged glaciology or ask your own question.

13
Converting glacier volume to mass: what ice density to use?
10
Siberia (Beringia) during last glacier period
4
Is glacier growing a hoax?
0
If an asteroid strikes a glacier, does it make a print on the land below?
5
Is a glacier advancing or retreating? How to tell?
26
Why does glacier ice look blue?
4
What factors explain mountain glacier retreat variability?
4
Simple and realistic data for glacier modeling
5
Nonlinear Stokes equations for glacier modeling
4
Weather conditions to create significant glacier growth