In many articles on the internet (I'll cite a couple for the sake of the question), smoke from the fires (composed mainly of $\small\mathsf{CO_2}$ and CO) following a nuclear war would cool the atmosphere and would cause a "nuclear winter".

Nuclear winter is a severe and prolonged global climatic cooling effect hypothesized1 to occur after widespread firestorms following a nuclear war.[3] The hypothesis is based on the fact that such fires can inject soot into the stratosphere, where it can block some direct sunlight from reaching the surface of the Earth.

In the 1980s, using simple climate models, we discovered that global nuclear arsenals, if used on cities and industrial areas, could produce a nuclear winter and lead to global famine.

Smoke from the fires would last for years in the upper atmosphere, blocking sunlight, and making it cold, dark and dry at the Earth’s surface.

But when we are taking about global warming, oil burning (which releases $\small\mathsf{CO_2}$) contributes towards global warming.

The question contains a false assumption that climate science fails to consider the cooling effects of aerosol particles, including from smoke, that are the principle forcing expected for nuclear winter scenarios. Climate science does attempt to quantify every significant effect, both warming and cooling - not only the warming effect from increased greenhouse gases - $\small\mathsf{CO_2}$. 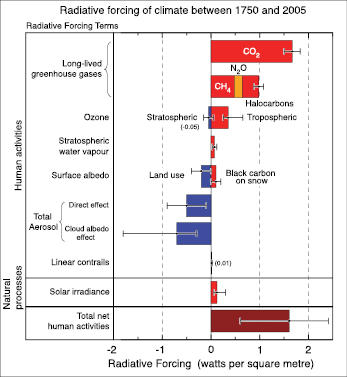 Whilst not as recent as I would like, the graphic shows the principal climate forcings that climate science has identified and includes the cooling affects of aerosols.

Aerosols from burning forests are short-lived, and the $\small\mathsf{CO_2}$ from burning vegetation should be drawn back down by regrowth, whether forest regrowth or grassland. The most significant, enduring climate consequence of Amazon forest being cleared and burned is not the aerosols or the $\small\mathsf{CO_2}$ from the fires, it is from land clearing turning a large existing Carbon Sink into a carbon source.

Dedito's answer is valid, but I wanted to offer a laymen's version.

A nuclear winter scenario blocks the sun's rays from "smoke" (e.g. particulate matter, not transparent gases such as CO and $\small\mathsf{CO_2}$). This causes a net global cooling effect, due to the large volume of particulate that is trapped in the stratosphere and reflecting sunlight back to space. The driving principles involved in this process are indeed included in climate models and global warming predictions. However, the net effect for "business as usual" scenario is a net warming.

Your assumption that "smoke" in the sense of your question, i.e. the emissions from a burning event, consists only of $\small\mathsf{CO_2}$ is wrong. At least it is not the only factor at play.

During the events you mention, not only $\small\mathsf{CO_2}$ is emitted but also loads of other components such as dust, soot, sulphates and many other things. Especially the particulate components are interesting here. Let's call them dust for simplicity (although that use of the word is not entirely accurate).

During emissions at low altitude (such as driving a car) that dust is quickly removed from the atmosphere and has only local impact. But when enough dust gets into higher layers of the atmosphere, it contributes to cloud formation and causes cooling. If there is enough dust it might even have a direct dimming effect.

That is why the scenarios you describe are very different. Also, not all burning has the same ratio of dust to $\small\mathsf{CO_2}$.

Note that the impact of aerosol on climate is a field of intensive study and is included in current climate modelling. There are high uncertainties related to this. My answer should only indicate why the things are different.

While the main emissions from these fires are $\small\mathsf{CO_2}$ and CO, the more important difference is what happens to the poorly combusted carbon products that are aggregated into larger particles. The climate community tends to refer to these as black carbon (BC), although that’s an oversimplification. These BC particles are strong absorbers of solar radiation, causing local atmospheric heating, but they also have a very short lifetime in the troposphere (~5 days; Baker et al, 2015), so the amount of BC in the atmosphere at any one time is relatively small (~0.1 Tg). This has an overall warming effect on the troposphere, which is why it’s included in calculations of historical and future greenhouse warming, but it’s not as large as that of a long lived and abundant species like $\small\mathsf{CO_2}$.

An important thing to note is that there are large scale differences between current, normal smoke emissions and those from a nuclear incident. Current BC emissions from all sorts of surface burning processes are about 7.2 Tg / yr (~0.02 Tg / day; Kilmont et al, 2017). A big number compared with that ~0.1 Tg atmospheric burden but, as I say, the removal processes are fast. These emissions are spread over most of the global land area (although they’re greatest in Africa, India and China), so the emissions per unit area are also relatively low.

In a single nuclear incident the BC emissions would be much greater, would occur in a small area and would be injected throughout the troposphere. For example, Robock et al (2007), the same people you link to in your question, ran this simulation:

In our standard calculation, we inject 5 Tg of black carbon on 15 May into one column of grid boxes at 30 N, 70 E. We place the black carbon in the model layers that correspond to the upper troposphere (300–150 mb).

E-folding times are 6 y, compared with 1 y for volcanic eruptions and 1 week for tropospheric aerosols.

The BC then absorbs solar radiation and heats the stratosphere, reducing the amount of solar radiation reaching the surface and cooling surface air temperature by more than 1 degree Celsius for about 5 years. Note that the associated $\small\mathsf{CO_2}$ emissions would warm the troposphere, but over a slower time scale and these studies tend to concentrate on the immediate BC cooling effect of a nuclear incident.

As an additional bit of contrast, that study also found that,

When we placed the aerosols in the lower troposphere (907–765 mb), about half of the aerosols were removed within 15 days

This indicates how important it is for the BC emissions to reach the stratosphere in order get a prolonged surface cooling.

The two factions have different points to prove. The nuclear catastrophe faction have to prove that a nuclear war would be a disaster of the first magnitude, which I don't doubt for a moment, while the global warming faction have to prove that the current warming episode is caused by burning fossil fuels. Forest fires are fairly neutral in that whatever replaces the burned forest, be it more forest, oil palm plantations or conventional farm crops, will extract almost as much CO2 as was released.

People with points to prove are apt to get carried away, like the Chicxulub enthusiasts who maintain, against the evidence, that a bolide impact on the Yucatan peninsular caused forest fires on the other side of the globe. CO2 emissions from the Deccan Traps super-volcano are usually ignored as a cause of the extinctions. Think of a million Tambora eruptions rolled into one and you have some idea of the Deccan Traps.

As you may already be aware, you don't need nuclear weopons to set cities on fire. The fire bombing of Tokyo in February 1945 killed 90,000 people, while the nuking of Nagasaki later that year killed 'only' 45,000. There were many such fire bombings during the 2nd World war, yet I have never heard it said that they contributed a meaningful amount of CO2 to global warming. A lot of war industries were also releasing CO2.

One thing I am absolutely certain of is that there has always been climate change and there always will be, and it will not be stopped in its tracks by anything man can do in the 21st century or any other century. Slowed perhaps, but not stopped.

13
When will glaciation resume? Has global warming delayed return to global cooling?
10
What makes a nuclear winter so extreme and destructive?
2
Can Volcanic Eruptions Help Combat Global Warming in the Long Run?
4
Were there any plans or proposals for "unilateral geoengineering deployments" before this paper was publsihed?
11
Relationship between natural disaster and global warming, in the media
2
Isn't a warmer climate better for energy generation?