How to interpret precipitation probability?

Below is the Dallas precipitation forecast I just got (requested from Google at 10am, Nov 29, 2019).

From this, what is the probability that a 10cm (diameter) cup placed in a Dallas park from 4:00pm will have some visible water in it at 4:10pm?

I have never understood what the 61% in the chart really is forecasting and really want to know the probability of my getting hit by a liter of rain in a random 20 minute run...just asking two simpler questions here to work my way up. 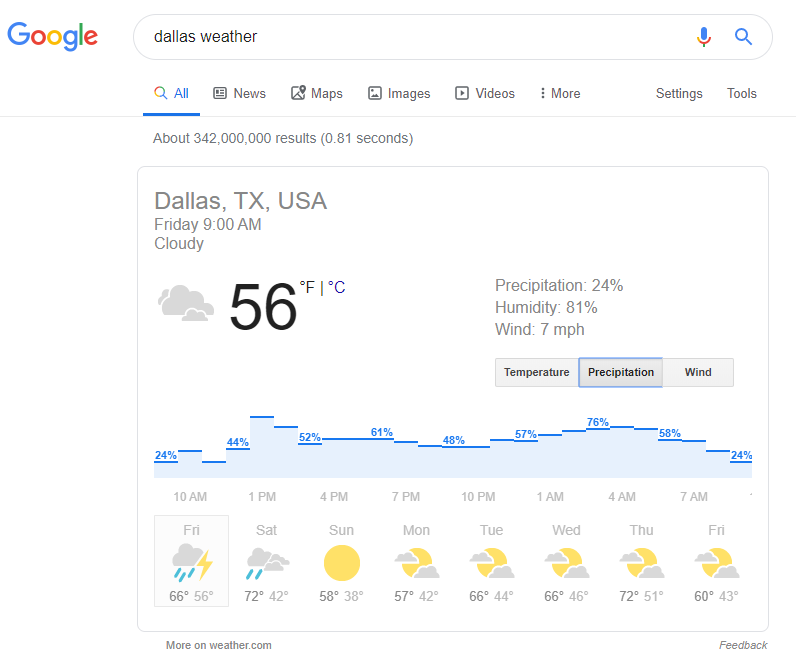 Given only this information and nothing else, there isn't really a definitively correct answer.

In reality, it depends on the nature of the precipitation. 61% could mean that there is a 61 percent chance of a thunderstorm between 4 and 5 PM, but since thunderstorms are short-lived, it might only be raining for 10 out of 60 minutes.

61% could also mean that an area of precipitation has a 61% chance of passing over Dallas. If that's the case, then it might be a 61% chance of rain for the entirety of the hour and a 39% chance of no rain at all.

It is likely that the forecast is made using an ensemble of runs from a weather model. As weather is chaotic (deterministic, but heavily dependent on initial conditions), each run will show a different pattern of precipitation, and the probability is likely to be simply the proportion of model runs that exhibited precipitation in that location during that hour. Sometimes the pattern in each model will be very similar (e.g. a weather front going through) or they may be very different (AIUI convective rainfall, e.g. thunderstoms, are less predictable, so each run may have a broad pattern of isolated showers, but you will miss them in some runs but not in others).

Note that "location" will mean the grid box in the weather model (km^2?), it doesn't mean that it will rain everywhere in that grid box, and definitely not a cup. I used to play cricket quite regularly at a place with three cricket pitches all within sight of eachother. I can remember several occasions where it was raining on one pitch, but not another (play stopped on one pitch but carried on on the other).

Not the answer you're looking for? Browse other questions tagged weather-forecasting precipitation united-states or ask your own question.

13
How to interpret hourly precipitation forecast?
7
I'm still confused about what “probability of precipitation” means
1
Over what distance can weather be assumed to be constant?