History of the Arctic Ocean

Much of the Arctic Ocean is fairly shallow compared to other oceans. There must have been times in the past during severe ice ages that a lot of what is now the ocean bed was above sea level. When was the last time that most of the arctic Ocean floor was above sea level? Going back further, were there ever forests, peat bogs or coal deposits on the present day ocean floor, and when were the internationally coveted oil reserves formed? 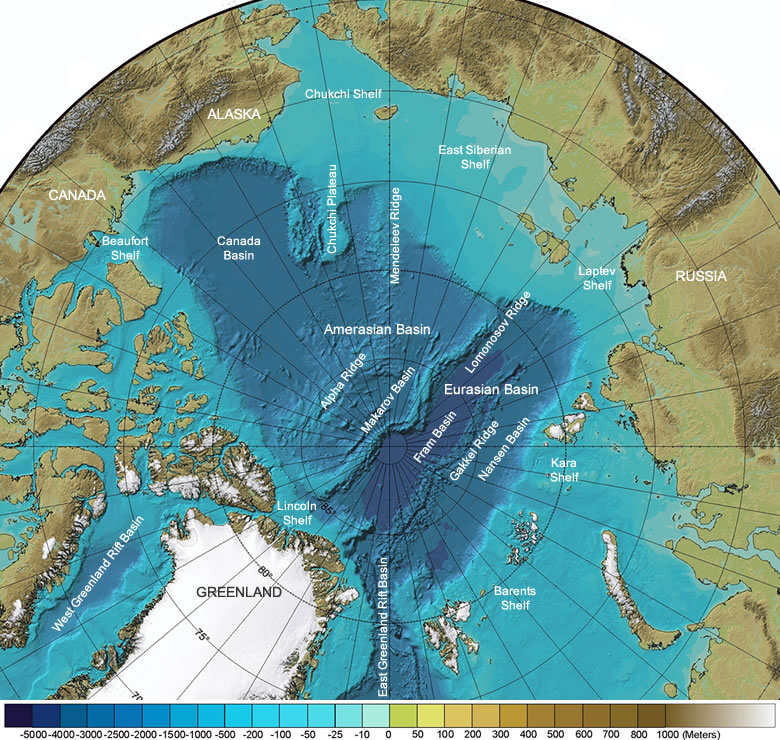 Geology.com
The actual "ocean floor" would still be deep water. There is a general explanation of the oil formation here and here, although they don't say when (or where the continents were when the sediments were deposited), and again, this is on the shelves, not the floor.

"An overview of the petroleum geology of the Arctic" has:

Maps of palaeogeography of the Arctic based on Golonka's maps for the Late Devonian, the Middle Triassic, the Late Jurassic and the Middle Palaeogene, representing the times of deposition of some of the major Arctic source rocks

Not the answer you're looking for? Browse other questions tagged oceanography sea-level minerals ice-age oil-reserves or ask your own question.

13
How much of the underwater land masses within the arctic ocean is considered continental shelf?
12
What is a reasonable forecast of sea level in 2100?
12
For what percentage of the earth's history has there been permanent ice?
6
Uranium Deposits in the Ocean?
3
Beringia - history of the region, periods of sea level fall/rise - paleogeography of Pleistocene
2
How quickly can coral fossilize?
3
What was the percentage of land mass in prehistoric times when temperatures were high enough that we had no ice caps?
4
If all the world's ice were to melt, would this shift the earth's centre of gravity with consequential effects on sea levels?
7
Could the Grand Canyon be flooded by the ocean if it got deep enough?