How does the subsurface earth temperature vary around the world?

In the US, when constructing a geothermal heat pump, common knowledge holds that anywhere in the country the subsurface ground temperature at a depth of 5 m will be around 10 to 15 C, which is a good temperature to provide cooling in summer and heating in winter.

I was trying to find information on subsurface temperatures at various depths around the world -- I had assumed that this value would be fairly consistent, but I am unable to confirm.

How does subsurface temperature vary around the world (say at a depth of 5 to 10 m), and what does this depend on? I am not concerned about the effect of local phenomenon such as volcanic activity.

I'd be particularly interested in a map (static or interactive) presenting this information.

So far I have only found information for two regions: the US-Virgina and Cyprus. Following is a series of curves for the US. A similar diagram is available for Cyprus, but its locked in a pdf file.

These results are similar, but it needs to be noted both locations are in temperate climate zones. The latitudinal extent of Virginia is between 36.5° and 39.5° North and Cyprus is 35° North.

From research undertaken in Australia, the temperature at depth in a soil is also dependent on the air temperature and hence the latitude. At a depth of 1 m the soil temperature is 35 °C at latitude 10° South and 12 °C at latitude 45° South. There will be a corresponding difference at 5 to 10 m depth. 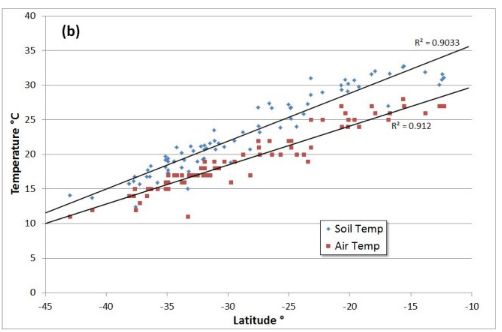 About half of the solar radiation received by the Earth is absorbed at the surface. As a result, the ground temperature shows seasonal fluctuations to depths of about 15 m where the temperature is approximately equal to the mean annual air temperature(8 - 11° C in the UK). Below this the ground temperature increases at, on average, 2.6 °C per 100 m due to heat flowing from the interior of the Earth. Mean temperatures at 100 m depth in the UK vary between about 7 - 15°C.

Not the answer you're looking for? Browse other questions tagged temperature geothermal-heat or ask your own question.