Albedo is a measure of the amount of light reflected back by an object that is incident on it.

So, high albedo means that a greater portion of light falling on something is reflected back. This also means a that greater amount of light goes back towards outer space which is then absorbed by the greenhouse gases present in the atmosphere. Thus high albedo contributes to global warming.

Now, if we consider low albedo, then that means a greater portion of light is absorbed thus raising the temperature or otherwise the heat content of the body. Less light is reflected back for greenhouse gases to capture. But then absorbed heat itself contributes towards global warming.

So as I understand, both low and high albedo contribute towards global warming. Is this understanding of mine correct?

When we do climate change engineering, what do we try to do in terms of albedo? Do we try to achieve high albedo or low albedo?

Additionally I want to know about the effect of 'concrete jungles' in urban areas on global warming?

In principle, and grossly simplifying, energy from the sun warms the ground and less the air. The overlying air is then warmed by the ground, leading to convection, pressure differences, and all that.

So, a high albedo atmosphere would prevent sunlight from reaching the ground, having a cooling effect. Equally, a high albedo ground would reflect more sunlight, less warming the air. That's why glaciers or pole caps of ice have a feedback effect on cooling.

Furthermore, wavelengths reflected by clouds can help cooling an area by day, but also trap warmth radiating from the ground when they move over it. That depends on the situation.

A low albedo atmosphere would let more sunlight pass. In conjunction with a low albedo ground it has a warming effect. Again a potential feedback when ice starts to melt and exposes more ground, leading to more warming, etc.

An open sky will allow warming of the ground by day, but also partly cools back to space by night (continental or desert climate). Greenhouse gases are those that reflect this emitted radiation back instead of letting it escape into space.

Highly populated areas can have a "heat island effect", because of the low albedo of asphalt and concrete and the lack of plants and foliage to absorb sunlight for photosynthesis and evaporate ground water and thus cool.

That (highly controversial and IMO only driven by economic interest) geoengineering thing is about raising the albedo of the stratosphere in order to reflect more sunlight before it reaches the ground. Its adverse effects on ocean acidification and damage to marine life and terrestrial plants and animals ("acid rain") and unresolved side effects could outweigh the potential benefits. But that is a discussion on its own, IMO.

This also means a that greater amount of light goes back towards outer space which is then absorbed by the greenhouse gases present in the atmosphere.

No, it depends on the wavelength. Just like our body is transparent to X-Rays but doesn't let visible light through, greenhouse gases let sunlight through but absorb infrared light radiated by Earth. 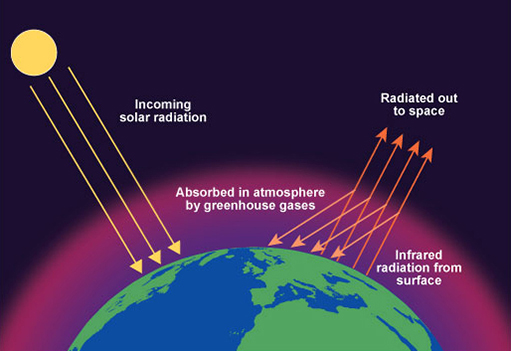 No, it is low albedo which contributes to global warming because ground with low albedo absorbs more of the sun's rays. High albedo reflects them back into space, and therefore has a cooling effect. When the polar caps increase in size, this can lead to an ice age if the caps reflect enough heat into space. There can be a feedback effect whereby the more the caps reflect the heat away, the more cold it gets and the more the caps increase in size, reflecting even more heat back into space.

To change the earth's albedo artificially by a significant amount is an impossible task, and any attempt to do so would be prohibitively expensive as well as having the environmentalists up in arms. Whatever the solution to global warming, it isn't geo-engineering of the kind you suggest.

The concrete canyons that you mention would be much the same as natural canyons except for one thing: they consume an enormous amount of energy, much of it derived from fossil fuels, so make a contribution to global warming.

11
How exactly is the "global average temperature" calculated and how reasonable is this method?
0
Calculating exoatmosphereic flux and figuring out amount of SW Earth will absorb at an albedo of 0.3?
0
Over which surface will the albedo changes due to clear and overcast skies have the greatest impact?
4
How are CO2 emission effects and high altitude effects of air travel compared to each other?
9
Impacts of high-altitude emission of greenhouse gases (GHG) compared to sea level GHG emissions
1
Can anyone explain the reason why CO$_2$ increases global temperatures (not the simplistic greenhouse analogy provided for public consumption)?
2
What are the affirmations regarding the effects of climate change that have a high degree of consensus amongst climate scientists?