I have an argument with a climate change denier.

He says the rise of water vapor in the atmosphere causes a "much larger" cooling effect by taking vaporisation heat from the ground than the heat generated by the additional greenhouse effet.

I say the additional greenhouse effect integrates with time, so after a certain time T (which I suspect "small"), this heat will compensate the latent heat taken from the ground.

Does anyone have a reference establishing the order of magnitude of T ?

Note the question is NOT about the "normal" water cycle where latent heat is taken at vaporisation and released at condensation, it is about the (undisputed) global augmentation of water vapor in the troposphere.

This is actually hinted at in the typical Trenberth energy budget diagram for the Earth: 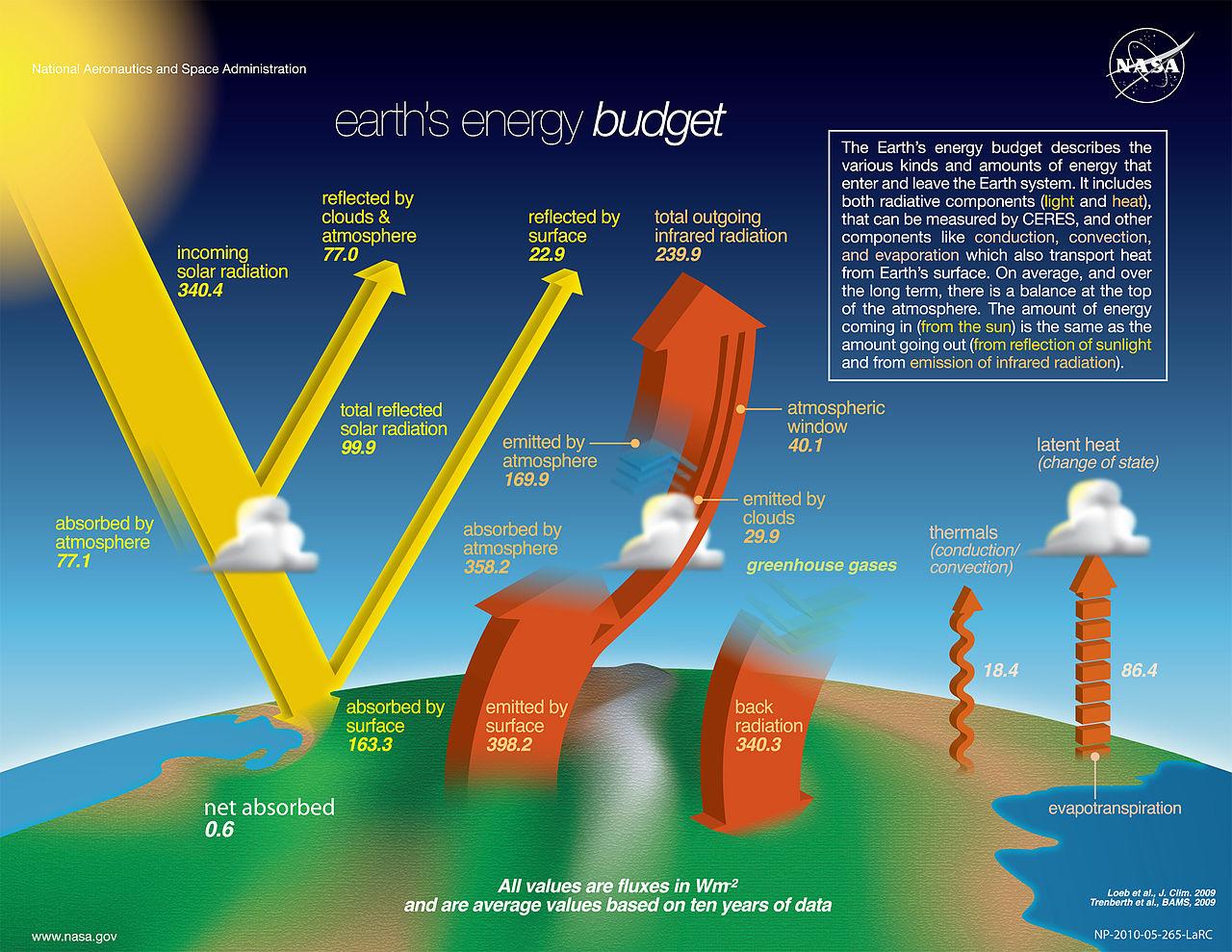 The very heavy majority of that natural greenhouse effect is water vapor. The water cycle indicates that on average that water vapor stays in the atmosphere for two weeks (this article now suggests 8-9 days). So from those details, that means we can consider a water vapor's greenhouse return to be about four times its phase change energy moved. And so a quarter of the residency time works out to a rough estimate that it takes about 2-4 days for the average water molecule to send as much energy back to the Earth as it brought up from surface to the atmosphere by its absorption and eventual condensation/deposition.

I can imagine your friend may not feel comfortable with just using this figure to consider the estimate, so perhaps lets try an alternate way of tunneling down to where these numbers come from....
For steady water vapor levels in the atmosphere, the only major way in the end that moisture transfers energy from surface to atmosphere is by its resultant precipitation (other water transitions tend to have no net change on moisture, and don't shift net energy from the ground... water that evaporates and then recondenses at the ground has no net energy change, likewise water vapor that becomes a cloud, then reevaporates at that level has no net energy change over that process).

How long does it take to achieve that in greenhouse reradiation by that particular water vapor? In a sense it's not easy to calculate the energy directly by each molecule... we know the radiative properties of water, what wavelengths water reflects/absorbs/radiates more at, but it's a cumulative distribution, each molecule affected by its location and interaction with the others that determines the overall amount. We can look how the greenhouse effect roughly doubles the energy we receive in a day, meaning half of all surface energy is from previous surface radiation being returned back... which works out to be that $340.3\mathrm{\frac{W}{\,m^2}}$ of greenhouse return). But either way, it all leads back to residence time meaning it's that same ratio that was given from the figure, 86.4/340.3, and so the same time. It may really help to think of it not so much as how long it stays and how much that water molecule contributes while it is in the atmosphere, but instead about the whole water cycle process being what maintains the amount of water vapor in the atmosphere to allow for that amount of continued greenhouse return, and so it's just one continuous amount versus the other. But if you really do want to think of it as the time for water vapor to generate its greenhouse effect matching its latent heat transfer, it looks like it must be on the order of about 3 days, or around a quarter of its time in the atmosphere, to result in the energy amounts we see.

I am doing some calculations on this question myself. The atmospheric lapse rate is about 6.5K/1000m. The adiabatic lapse rate is 9.8K/1000 and the dry lapse rate of the naturally unstable atmosphere of Earth should even be 10.8 K. So arguably the constant transport of latent heat by vapor from the surface into the atmosphere is reducing the lapse rate by some 4.3K/1000m. Without a doubt the GHE would be much larger if it was not for the latent heat provided by vapor.

We need to ask what size GHE has (not 33 K, but less), what bigger size it counterfactually had without latent heat and a lapse rate of 10.8 K, determine the share of vapor in this case, and compare it to the (negative) effect of latent heat. Depending on what is bigger, vapor is either a GHG or an anti-GHG. From all the modelling so far I get definitely the latter result.

17
Is global warming being moderated by latent heat of melting polar ice?
10
Does natural plant decomposition release more greenhouse gases than burning
0
In terms of the greenhouse effect, what is the Earth's heat capacity?
0
Yearly changes of solar irradiation and atmospheric feedback
0
Doesn't increased human activity add to heating the atmosphere directly?