Considering the thin piece of material on the surface of Mars in the image below, is there anything like it on Earth? 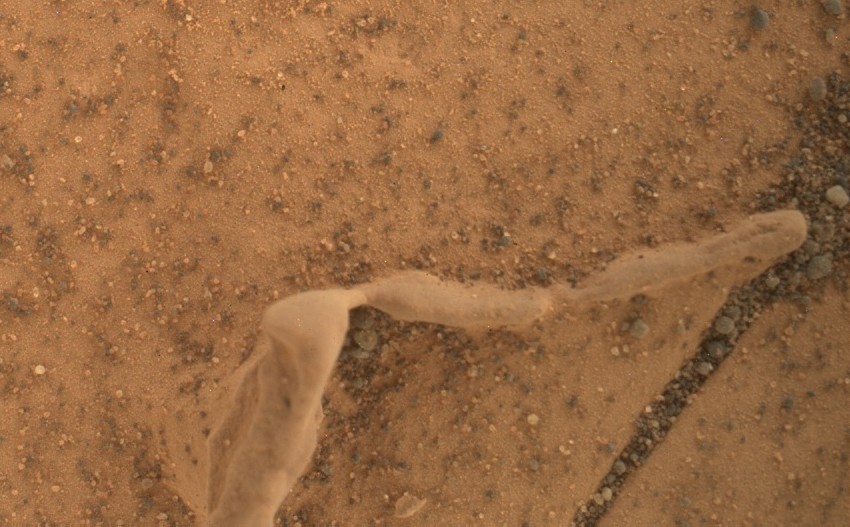 The above is a magnified part of the original image below captured by the Curiosity rover on Mars on sol 1729 (June 17, 2017).
From the added information with that raw image it can be estimated that the distance between the lens and the target was about 14 cm. 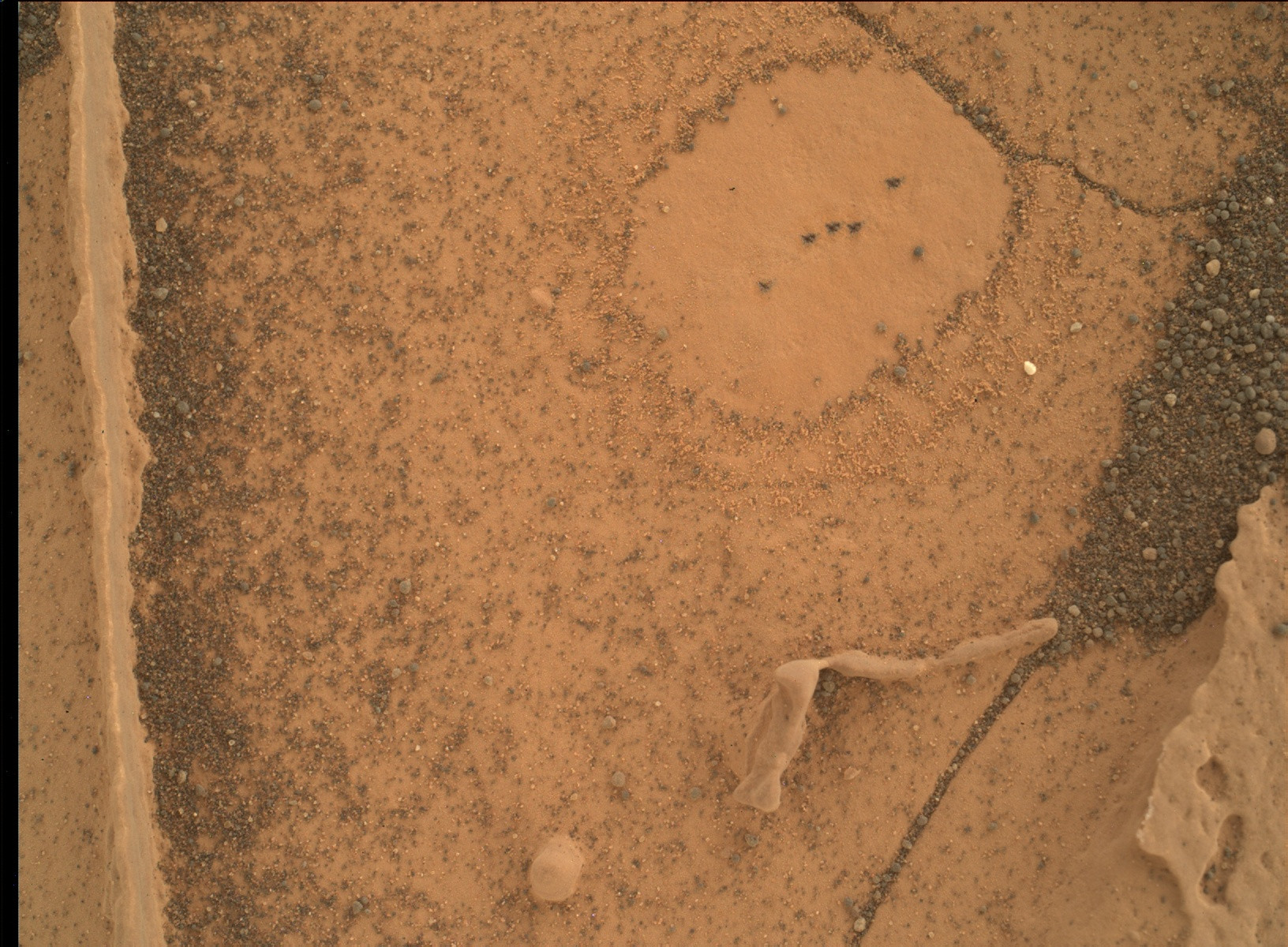 Below another image of the thin piece with surroundings in the sunshine.
Click (or double click) on the image for magnification. 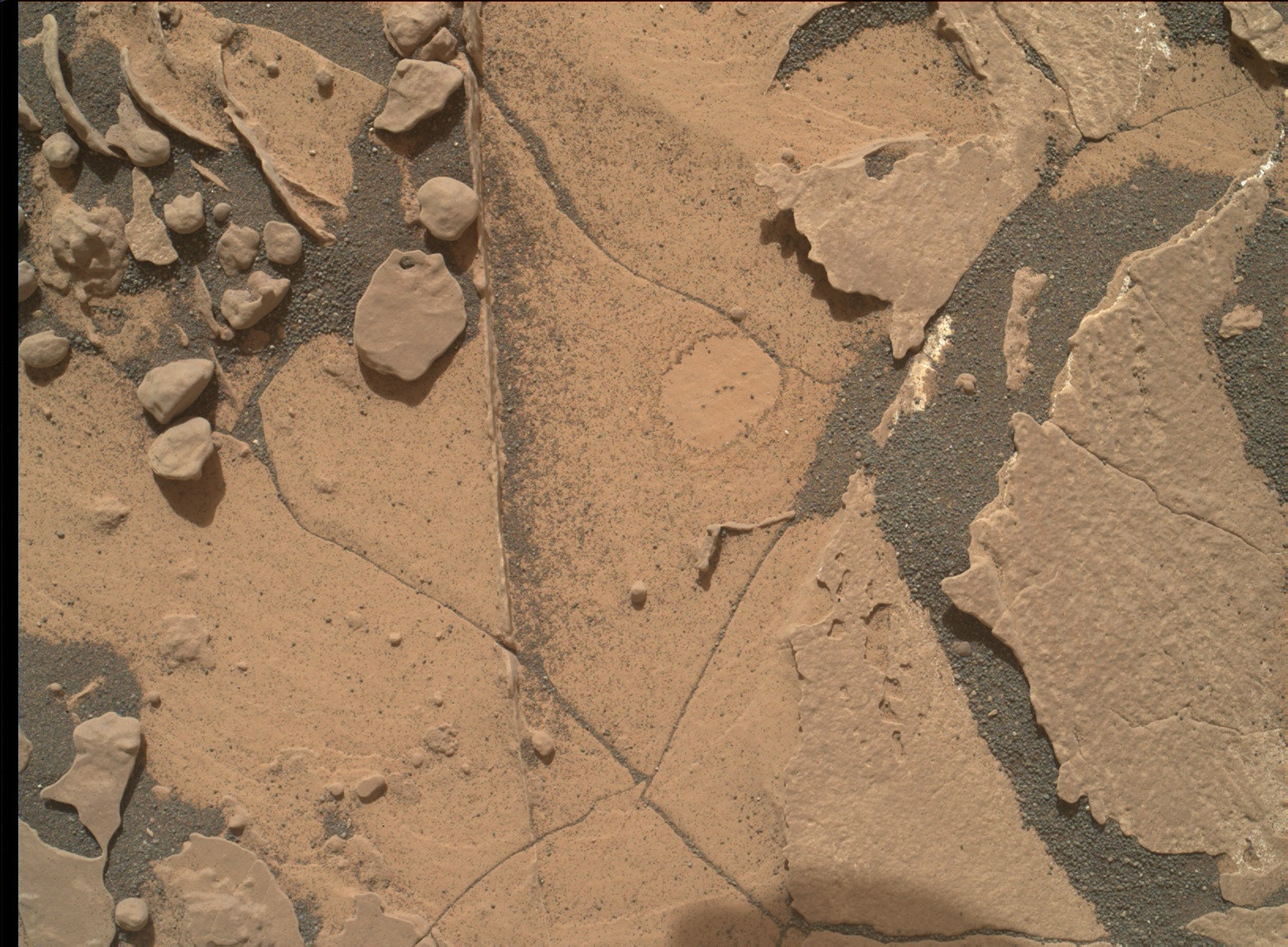 Asking about the chemical composition of this piece of material on space exploration SE, it appeared from the answers that most likely it is CaSO$_4$, perhaps the hydrated form gypsum.
I've seen many other raw images from Mars, but not anything like this.

What could this thin piece of material be, does it resemble anything on Earth ?

What you can see in the bottom picture is sandstone/mudstone/claystone.

If you look at the bottom picture top right you can see a thin rock that has split off, this is how a rock splits after it has been heated and then suddenly gets cooled down as it does on Mars when the Sun goes down.

On Earth the change in temperature is too slow for this to happen in nature, but you can see this if a fire has been burning on top of a rock/stone and it has been rapidly cooled down.

This is how mining was done before explosives where invented, heating up the rock until it is "glowing" hot and then throwing water on the rock to suddenly cool it down so it fractures.

If you enlarge the picture and follow a line at 1 o'clock from the weirdly shaped piece in question, a few feet away from it at the back of an imaginary 'man's head' rock, you will see a similar convoluted piece. Now follow a line at 10 o'clock from our original specimen, and also a few feet away is a longer,straighter piece in the process of eroding from the rock. Nearby are more pieces eroding.

It seems to me that there were cracks or voids in the sandstone/mudstone into which a harder intrusion has been introduced. As the rock erodes, which is more slowly on Mars than on Earth because of the lack of wind and rain, these intrusions are eroding out and sometimes end up lying on the surface. As to the nature of the harder rock which forms the intrusions, I couldn't say. Perhaps someone else will have an idea. Is there anything like it on Earth? Probably, because most things on Mars have their counterparts on Earth, but I couldn't tell you where to look for these strangely shaped rocks.

Not the answer you're looking for? Browse other questions tagged geology geochemistry mars or ask your own question.

15
Are there situations where the groundwater table doesn't follow the morphology of the surface?
21
Is there geological evidence that the moon once collided with the Earth?
25
How much of a mountain is below the surface?
8
Melting basalt on the lunar surface - what would the resulting material be like?
14
Why is the temperature between the earth core and surface not distributed linearly?
10
What are the most similar Earth analogues to Mars' seasonally recurring slope linea?
6
What is serpentinization, in the context of disappearance of surface water on Mars?
8
What are Ordovican trace fossils, and what do they look like?
7
In an Earth-like planet with no history of carbon-based life forms, would there be limestone?
3
What ore minerals are likely to be found in a thin section like this? What can we deduce from the structure?