Anyone know of an existing dataset of areas below sea level? Vector extents would be ideal. Doesn't need to be super detailed for my purposes, but it would be good if it included all areas (e.g. over-estimate is better than under-estimate).

There is a List of places on land with elevations below sea level on Wikipedia, which looks like it's fairly complete, but finding the extents of the below-sea-level area for each of those locations is not likely to be simple.

You could try building one using a global Digital Elevation Model. There are several freely available like TanDEM-X, SRTM, or ASTER GDEM. You'd have to look for all the pixels containing a negative value. Adjacent negative pixels would give you connected regions below sea level, and you could easily estimate their area just by multiplying the number of pixels of a region by the area of one pixel.

I'm not saying it would be easy. The main challenge would probably be that some regions would be split across several tiles.

An update on this. I spent a couple hours trying this as an exercise. I downloaded three tiles from the ASTER global DEM centered around Badwater Basin (Death Valley, USA), one of the regions in the Wikipedia list. I wrote a small (~20 lines) Matlab script that does the following:

Here is the result: 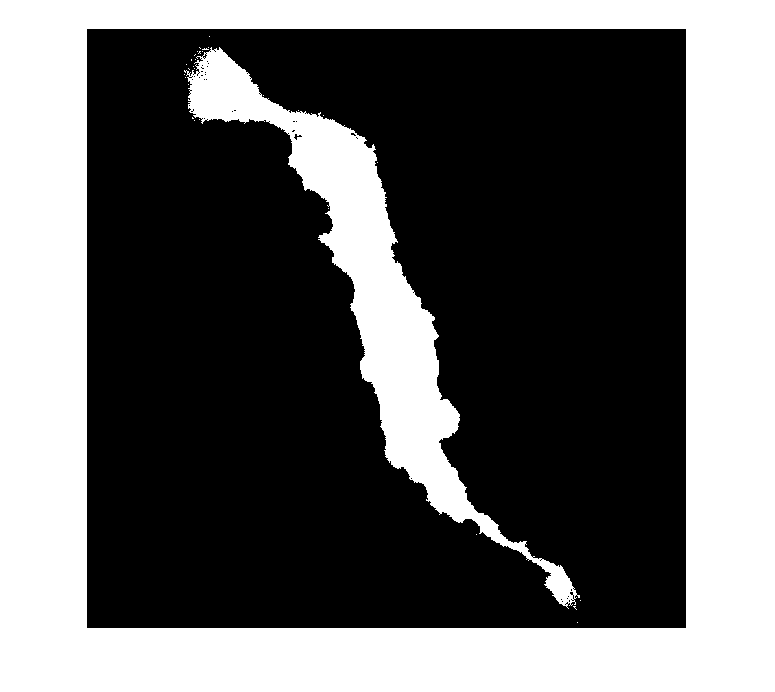 I'm pretty happy with it, as it looks very similar to the yellow area labelled "below sea level" on this USGS map.

Now, how does it translate in terms of area? According to Matlab, the white region has an area of 1 236 989 pixels. Each pixel being approximately 30x30 meters, it yields a below sea level area of 1 113 km$^2$. The only figure I could find online is 1 425 km$^2$ from Encyclopedia Britannica, with no source. But for me that's close enough to have confidence in my estimate!

Not the answer you're looking for? Browse other questions tagged sea-level open-data land landscape or ask your own question.