Can anyone explain the reason why CO$_2$ increases global temperatures (not the simplistic greenhouse analogy provided for public consumption)?

The greenhouse effect analogy of global warming is that atmospheric carbon dioxide CO$_2$ absorbs some of the infrared radiation emitted by the Earth, and redirects a portion of that radiation back down to the Earth's surface, thereby heating the surface more than it would have done if that radiation had been able to escape into space.

Global warming is then simplistically explained to the general public by the idea that as atmospheric CO$_2$ concentrations rise, more infrared radiation is absorbed by CO$_2$ and re-emitted back down to Earth, causing increased heating of the Earth.

However, this explanation is not technically correct, because at present atmospheric CO$_2$ concentrations, just one kilometer of atmosphere is sufficient to fully absorb all the infrared radiation emitted by the Earth, at the wavelengths at which CO$_2$ absorbs.

So the infrared absorption process is already fully saturated, and thus further increases in atmospheric CO$_2$ will not lead to any additional absorption. This is why the simplistic explanation provided for the general public does not seem to be technically correct, even though it roughly outlines the idea.

I found one blog article by Clive Best that tries to explain the actual process behind CO$_2$'s ability to cause global warming. Judging from that article, the actual process is more complex than the simple explanation provided for public consumption. However, I don't fully understand the explanation given in the article (and from what I did manage to understand, I am not sure if it is fully correct).

So I wonder if anyone here can provide an easy to understand explanation of the actual mechanism by which increased atmospheric CO$_2$ leads to global warming. Or perhaps if you know any good articles that explain it, please can you post the links.

I also asked this question on physics.stackexchange.com here.

Borrowing an explanation from one of my other answers, the basic mechanism of the greenhouse effect is roughly as follows (note this is also a simplified model)

The Earth is in (to all intents and purposes) a vacuum, so it can only gain or lose heat via radiation. The sun emits most of its radiation at visible and UV wavelengths. The Earth's atmosphere is fairly transparent at these wavelengths and so the Sun's radiation mostly passes through it and hits the surface. Some of this radiation (determined by the Earth's albedo) is reflected from the surface back out into space, but the rest is absorbed by the surface, which causes the surface to be warm. The surface loses heat by radiating in infra-red wavelengths. Greenhouse gases absorb some of the IR radiation, which causes the atmosphere to warm up (the GHG molecules transfer some of this heat to non-greenhouse gasses by collisions, but heat is also transferred upwards by convection). The warm atmosphere re-radiates some of this energy both upwards into space and downwards back to the surface. The part that is radiated downwards is also known as "back-radiation" (and is directly observable). Now the important factor is not the amount of outbound IR radiated from the surface that is absorbed, but the altitude at which there are not enough greenhouse gases above to absorb the IR radiated upwards from that layer, so that it can escape out into space. The lapse rate means that the temperature of the atmosphere decreases with increasing height. This means that the more CO2 we put into the atmosphere, the higher this emitting layer becomes, and the colder it is. As the amount of IR radiated depends on the temperature of this layer, if this height increases then the amount of IR radiated from the planet falls, leading to an energy imbalance, with the planet absorbing more of the sun's radiation than it emits as IR, and so the planet warms up. This continues until the radiating layer warms up enough for the outbound IR to be in balance with the incoming radiation from the sun. So the more CO2, the warmer the mean surface temperature, all things being otherwise equal.

For a more detailed explanation of why absorption at the surface is of little relevance, see this RealClimate article by Spencer Weart.

Just to add a historical note, this explanation goes back at least as far as Ekholm's paper of 1901 "On The Variations Of The Climate Of The Geological And Historical Past And Their Causes":

The atmosphere plays a very important part of a double character as to the temperature at the earth’s surface, of which the one was first pointed out by Fourier, the other by Tyndall. Firstly, the atmosphere may act like the glass of a green-house, letting through the light rays of the sun relatively easily, and absorbing a great part of the dark rays emitted from the ground, and it thereby may raise the mean temperature of the earth’s surface. Secondly, the atmosphere acts as a heat store placed between the relatively warm ground and the cold space, and thereby lessens in a high degree the annual, diurnal, and local variations of the temperature.

There are two qualities of the atmosphere that produce these effects. The one is that the temperature of the atmosphere generally decreases with the height above the ground or the sea-level, owing partly to the dynamical heating of descending air currents and the dynamical cooling of ascending ones, as is explained in the mechanical theory of heat. The other is that the atmosphere, absorbing but little of the insolation and the most of the radiation from the ground, receives a considerable part of its heat store from the ground by means of radiation, contact, convection, and conduction, whereas the earth’s surface is heated principally by direct radiation from the sun through the transparent air.

It follows from this that the radiation from the earth into space does not go on directly from the ground, but on the average from a layer of the atmosphere having a considerable height above sea-level. The height of that layer depends on the thermal quality of the atmosphere, and will vary with that quality. The greater is the absorbing power of the air for heat rays emitted from the ground, the higher will that layer be, But the higher the layer, the lower is its temperature relatively to that of the ground ; and as the radiation from the layer into space is the less the lower its temperature is, it follows that the ground will be hotter the higher the radiating layer is.”

I would like to address what appears to be an over-generalization of your premise. You seem to be simplifying the radiative heat from the Earth. Yes, if you take an average temperature and an average atmosphere, the present amount of CO2 is almost completely maxing out the sides of the absorption bands and an increase in CO2 gets you almost no additional absorption. However, that is an average. Keep in mind that the majority of warming that is currently happening is at high latitudes and high altitudes, where infrared from the Earth is far below average. The increase in global CO2 has a larger affect in these colder regions because there is greater sensitivity to the increase in CO2, affecting those fringes of the absorption bands.

CO2 is dark in the long wave infrared wavelength so the higher the concentration the darker the atmosphere will be in this wavelength, and as you probably know darker colours absorb more heat.

CO2 is not a very powerful greenhouse gas but the amount of it in our atmosphere make this effect the dominating source for the heating we can see today.

Lots of other gases have a larger heating potential than CO2 but their concentration is low at the moment. The more complex a gas is the more heating potential it will have, this is due to the size of the individual gas molecules (CO2 has 3 atoms and methane has 5, so it will look darker in the long wave infrared band and therefore have a stronger heating potential).

A complimentary article to the one written by Spencer Weart and recommended by Dikran Marsupial is this other article from September 2019 written by Jason West, Professor of Environmental Sciences and Engineering, University of North Carolina at Chapel Hill.

Climate explained: why carbon dioxide has such outsized influence on Earth’s climate

It underpins what has been said here that what matters most is the height that the carbon dioxide layer can reach at the upper atmosphere.

In the article is said that carbon dioxide is important for climate despite the fact that water vapor absorbs more infrared radiation and the two gases absorb at several of the same wavelengths.

The article also re-states information given by by Spencer Weart about the role of carbon dioxide in climate change:

The scientists who first identified carbon dioxide’s importance for climate in the 1850s were also surprised by its influence. Working separately, John Tyndall in England and Eunice Foote in the United States found that carbon dioxide, water vapor and methane all absorbed heat, while more abundant gases did not.

Tyndall and Foote showed that nitrogen and oxygen, which together account for 99% of the atmosphere, had essentially no influence on Earth’s temperature because they did not absorb heat. Rather, they found that gases present in much smaller concentrations were entirely responsible for maintaining temperatures that made the Earth habitable, by trapping heat to create a natural greenhouse effect.

The reason why carbon dioxide has a much more importance in warming the planet while much more abundant gases like nitrogen and oxygen do not play an important role is related to its molecular structure:

The influence of carbon dioxide can be seen in past changes in climate. Ice cores from over the past million years have shown that carbon dioxide concentrations were high during warm periods – about 0.028%. During ice ages, when the Earth was roughly 7 to 13 F (4-7 C) cooler than in the 20th century, carbon dioxide made up only about 0.018% of the atmosphere.

It finishes explaining why it is foolhardy not to diminish the carbon dioxide emissions to prevent big effect on Earths climate:

Today the level of carbon dioxide is higher than at any time in human history. Scientists widely agree that Earth’s average surface temperature has already increased by about 2 F (1 C) since the 1880s, and that human-caused increases in carbon dioxide and other heat-trapping gases are extremely likely to be responsible.

Without action to control emissions, carbon dioxide might reach 0.1% of the atmosphere by 2100, more than triple the level before the Industrial Revolution. This would be a faster change than transitions in Earth’s past that had huge consequences. Without action, this little sliver of the atmosphere will cause big problems. 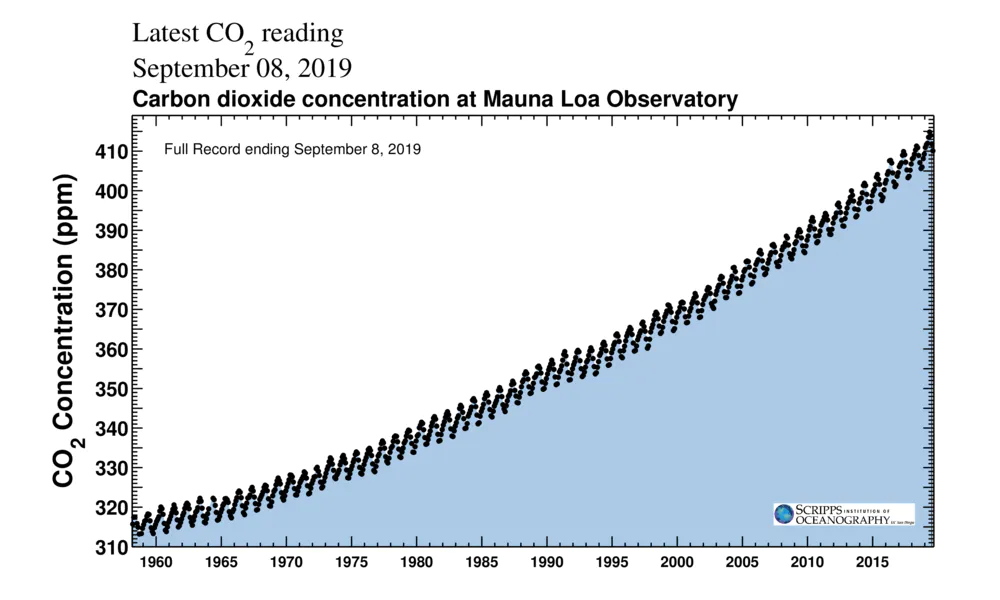 11
Is there any experiment to prove that CO2 with the atmosphere concentration can have greenhouse effect?
2
Why don't dewdrops form on a cloudy night?

5
Are greenhouse effect and ozone depletion correlated?
7
How can we calculate the temperature of the atmosphere, including the greenhouse effect?
0
Yearly changes of solar irradiation and atmospheric feedback
4
Effective Temperature of a Planet and Surface Temperature due to Greenhouse Effect
1
What potential geoengineering technologies could help a country "achieve its Paris (agreement) targets"?
2
Does visible light warm the earth?