Can hippopotamus fossils be found all along the Nile?

The image below shows their historical range (red) and current range (green) of hippopotamuses:

Question: Can hippopotamus fossils be found all along the Nile?

Or at least perhaps they used to be found all along the Nile, but now they're all excavated. 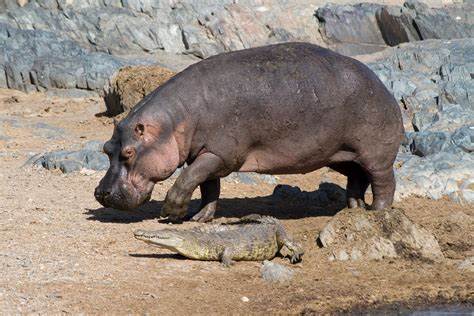 They most probably can, but there are two things to be borne in mind. The vast majority of animal corpses never fossilise, as fossilisation requires special conditions. This is especially true of animals from aquatic or very damp environments. Of those that do fossilise, only a tiny proportion are found and excavated. Some weather out of the rock and crumble away on the surface without ever being noticed by an expert. Many hominid fossils have disappeared in this way.

The other thing required by hippos if they are to flourish and eventually fossilise is a source of vegetable food, sometimes from the river itself, but more usually from grazing on the nearby river bank. Much of the lower Nile today passes through cataracts and deserts, but six or seven thousand years ago the climate was moister, and much of the eastern Sahara was similar to East Africa today, and had similar animals and vegetation. It is quite feasible that in those days there was enough grazing on the banks of the lower Nile to support a population of hippos. They were certainly found in the Nile delta.

There are short stretches that pass through cataracts or strong rapids. It is unlikely that these stretches were ever inhabited by hippos. The current is too strong and food sources difficult to reach, even if they were fairly nearby. Many hippopotamus carcasses are dismembered by crocodiles, which further reduces the likelihood that they will ever be found as fossils. Hippos don't like to stray more than a couple of hundred yards from water, and if there is plenty of aquatic vegetation they will seldom venture onto dry land.

15
What, if any, paleoclimate data can be derived from stromatolite fossils?
9
How do scientists determine the absolute or 'chronometric' date of fossils?
11
How can I learn to spot fossils and fossil-bearing rocks on the Jurassic coast?
12
Why are many fossils found in deserts?
0
Have fossils ever been found in the asphalt lakes of Trinidad and Venezuela?
0
Are marine fossils in the mountain happens due to lower sea levels?
0
What are some effective approaches to enhancing fossils in amateur found rocks?