I am sure there are different methodologies to arrive at such a number. Can someone in layman terms describe some of the most widely used and trusted methods and what data are used? Sorry I am outside the field of climate modeling so the simpler the better.

Your question is simple enough, but the answer depends on what exactly you're looking for.

Who is emitting where right now?

Real-time global monitoring of greenhouse gas emissions with a high spatial resolution is an emerging technology. We have very useful satellites (see Jean-Marie Privals answer), but they have limitations:

The spatial resolution of about 2 km may be good enough for that, unless the electricity plant is next to the cement producer, the emissions occur at night, the factory is switched off when the satellite happens to pass over, or it's cloudy (there are attempts to retrieve in the presence of clouds, but it's harder).

So while satellites are certainly very useful in GHG monitoring, it's difficult to get everything from satellites alone.

Where were emissions last month?

We can average daytime GHG contentration measurements over the period of a month. Combined with chemistry and circulation models, we can then try to estimate in what regions of the Earth those emissions may have occurred, but not with a precision high enough to tell "electricity or cement". This is an average of CO₂ measurements for July 2009: 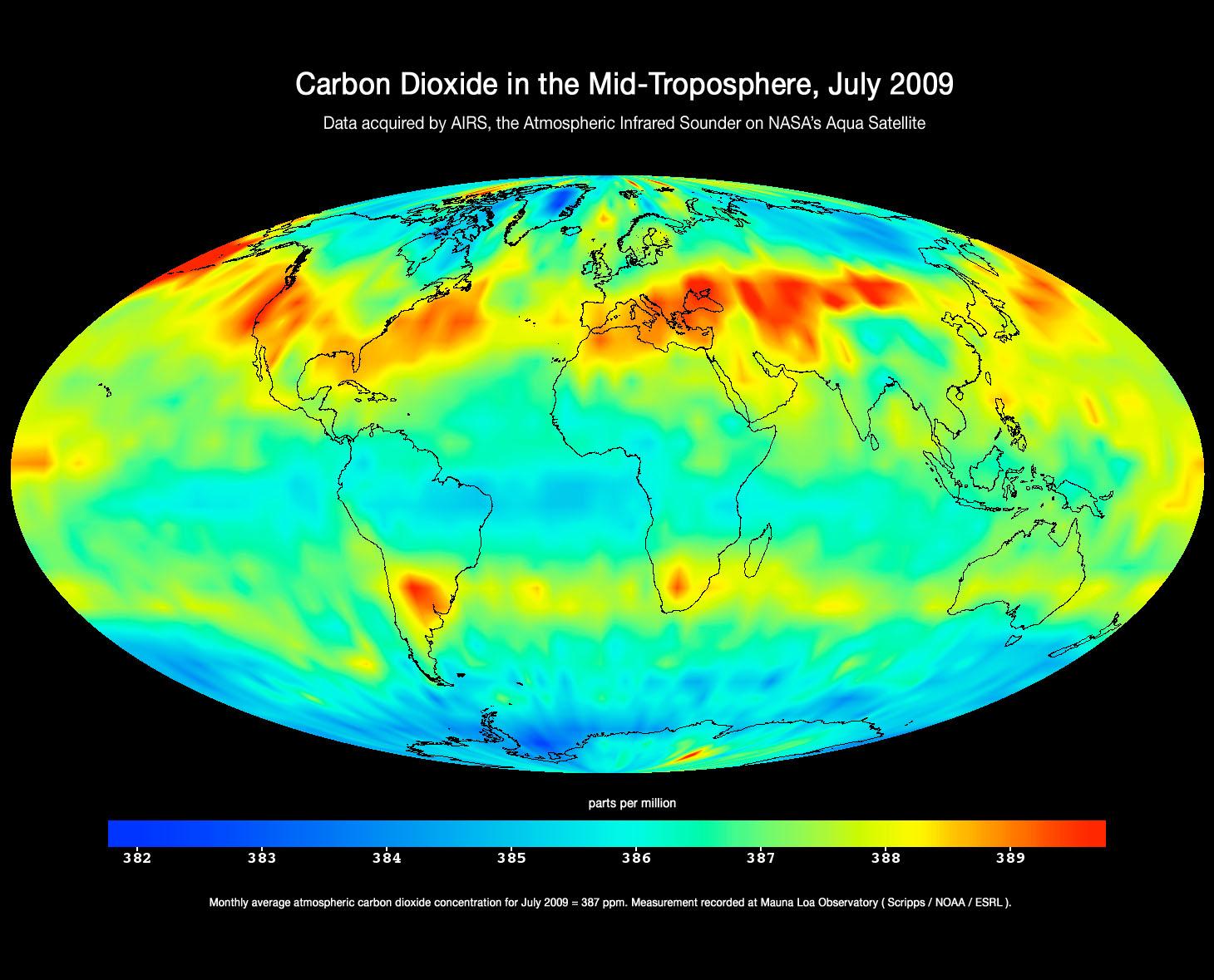 The limitations are less serious now: the satellite has multiple attempts to capture a particular scene, and will usually see at least one clear-sky overpass per month, probably multiple. In the image above, there was probably also some form of data fusion to combine with other sources or fill gaps using neighbouring pixels. The longer the time period we average over, the smoother the distribution will look.

What were global emissions last year?

However, if you are looking for global emissions averaged over a long time period, we can make use of the observation that CO₂, and to a lesser degree CH₄, is a well-mixed gas. Here, well-mixed means that it stays long enough in the atmosphere to reach pretty much everywhere given enough time. That means that ultimately, it doesn't matter where you emit. That's why "global" CO₂ concentrations may be measured at Mauna Kea (Hawaii, USA), even though this is far away from any emissions. However, that also means that it doesn't tell us whether the CO₂ was emitted in India, Italy, or Idaho. And much of the emitted CO₂ gets absorbed by the oceans, so the delta between this year and last is not enough to determine global emissions.

I can imagine a satellite observation-based model that calculates emissions on a spatial basis but I am not sure if our technology is advanced enough to do that accurately.

It is. The first satellite designed to measure GHG is GOSAT, from the Japanese space agency, launched in 2009 and still active today. It was followed by Nasa's OCO-2 in 2014. GOSAT measures CO$_2$ and CH$_4$, while OCO-2 measures only CO$_2$. There is also an OCO-3, which has been sent to the ISS last year, but I'm not sure if it's already active.

So, how does it work? Here is an image from the OCO-3 mission's website, labelled "Artist interpretation of OCO-3 measurement". 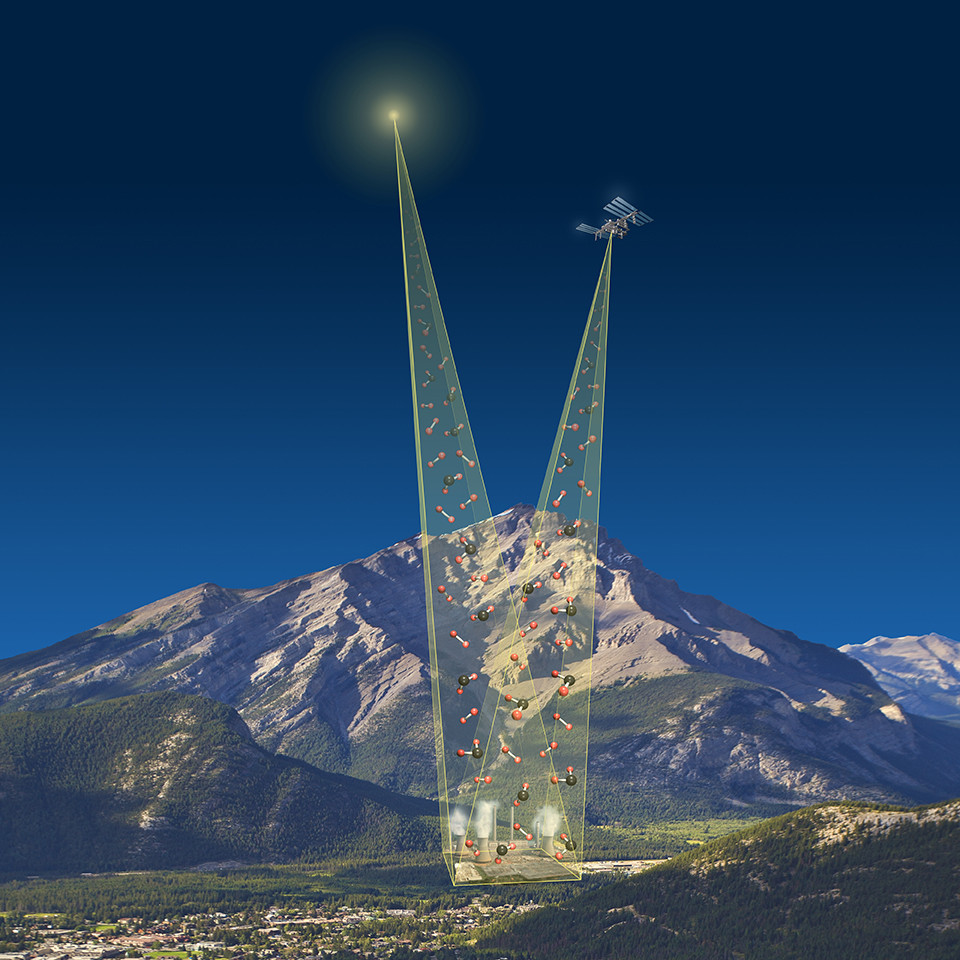 OCO-2 mission's website explains the basic principle better than I could do, so I will just copy an excerpt here:

To get the representative values of Xco$_2$, or the amount of CO$_2$ in the measured space, the OCO-2 instrument will measure at a given location, the intensity of reflected sunlight off the Earth's surface at specific wavelengths. Gas molecules in the atmosphere absorb the sunlight at specific wavelengths. So when light passes through the Earth's atmosphere, the gases that are present leave a distinguishing fingerprint that can be captured. The OCO-2 spectrometers, working like cameras, will detect these molecular fingerprints. Then the absorption levels shown in these spectra, like a captured image, will tell us how many molecules were in the region where the instrument measured.

If you want to dive more in-depth into this, there is a nice "Guidebook on the use of satellite greenhouse gases observation data..." (Matsunaga & Maksyutov, 2018).

Satellite data is relatively new and is likely to be used to compare and refine calculations of emissions by other means rather than used as the principle means for estimating emissions.

Consumption based accounting is the main way we get the declared emissions, including methane, nitrous oxides and carbon monoxide and others as well as CO2, for the world or individual nations under internationally agreed UNFCCC guidelines.

Not the answer you're looking for? Browse other questions tagged climate-change climate-models earth-observation or ask your own question.