Can we separate a sandy, clayey & salt layer on basis of their rheological properties?

Since, given enough compaction, salt is able to behave like a fluid & buoyant too if it's overlain by a higher density rock (it could be fine grained clay or a sandy sequence). But in another case, when a layered sandstone is inter bedded with shale, & given enough pressure and temperature, the shale becomes mobile & flows while the sandstone shows brittle properties. Do the above two situations work on different principles or same, or are these two completely different processes?

In your question I think you are mixing up metamorphic conditions such as the conditions that gneiss forms from sedimentary rock with the formation of diapirs. Diapirs occur where a less dense layer of a relatively plastic rock has denser overlying formations create sufficient pressure so that the less dense substance deforms and rises over time.

Diapirs of salt occur where thick salt deposits over overlain by dense sedimentary shales and sandstones. Because of the slowness with which salt deforms the sedimentary deposits will be buried sufficiently deeply that they will have lithified, turning to rock and becoming more dense. The salt layer will have some trapped water in it that helps the salt to recrystallize as a response to a pressure gradient.

In conditions of deep burial and high pressure differentials the sedimentary rocks will recrystallize into denser rocks and will deform, producing folds in some lithologies and faults in other rock types. The slow speed of the deformations and high pressures and temperatures (mostly due to deep burial) give the mineral grains the rocks are made of time to recrystallize and move around each other. Only if this sub-microscopic recrystallization is not happening fast enough will there be faulting in a layer.

You are referring to shale "boudins": sausage-like structures that form when rock layers are compacted, break apart, and are pinched at the ends by differential compaction stresses: 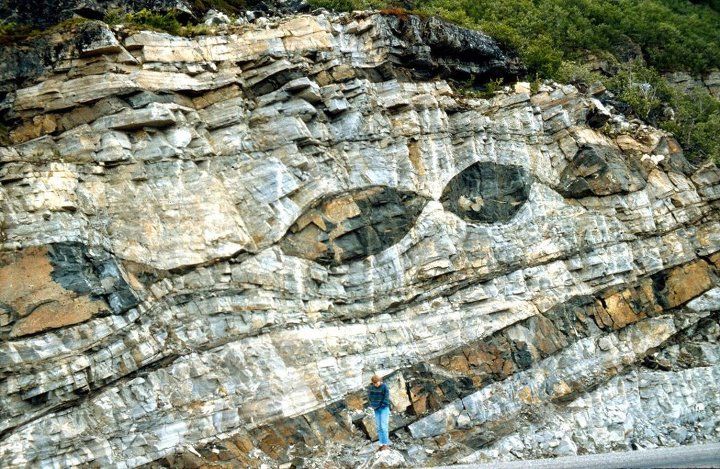 Not the answer you're looking for? Browse other questions tagged geology sedimentology petrology structural-geology or ask your own question.

5
Can soil color give accurate data about properties which affect it?