What does a floating mercury barometer look like? How does it work and how is buoyancy used?

This answer to How are barometric pressure measurements traceable over centuries to 100 parts per million accuracy? describes a floating mercury barometer, and mentions that some employed a Vernier scale for additional precision.

Since mercury is so dense (about 13.5 g/cm3) that many metals will float in it, but I'm having a hard time imagining how to make a barometer using his principle, and how a scale (Vernier or otherwise) is used to read the height of an object floating in mercury in order to determine barometric pressure.

A good place to start would be with Fortin barometers. They were "commonly used at meteorological stations to measure atmospheric pressure".

The advantages of this type of barometer are its portability (inverted), and that it permits the inspection of both free surfaces of mercury whose difference in level have to be measured. The major disadvantage is the cistern and the mercury it contains require frequent cleaning to maintain the instrument's accuracy.

A portable mercury barometer that was invented in 1800 by the French instrument maker Jean Nicholas Fortin (1750–1831). In other mercury barometers air pressure is calculated from the distance between the level of the mercury in the reservoir and in the tube. In the Fortin barometer the bottom of the reservoir is flexible (originally it was made from leather) and can be raised or lowered by means of a screw, allowing the surface of the mercury to be adjusted to a predetermined level. A vernier scale on the side of the barometer tube is then lowered until its base touches the top of the mercury in the reservoir and a reading is taken from the fixed scale marked on the tube. Before traveling, the base of the reservoir is raised using the adjusting screw until both reservoir and tube are filled with mercury. The Fortin barometer makes no correction for changes in temperature, which affect the volume of mercury, or for capillarity, which introduces inaccuracies. The instrument is nevertheless sufficiently accurate for most purposes.

Another type of mercury based barometer is the Kew Pattern. Unlike a Fortin barometer the mercury system is fixed in position. To compensate for the effect this has on pressure readings the scale used by Kew Pattern barometers is contracted.

The diagram below illustrates the features of a Fortin barometer. 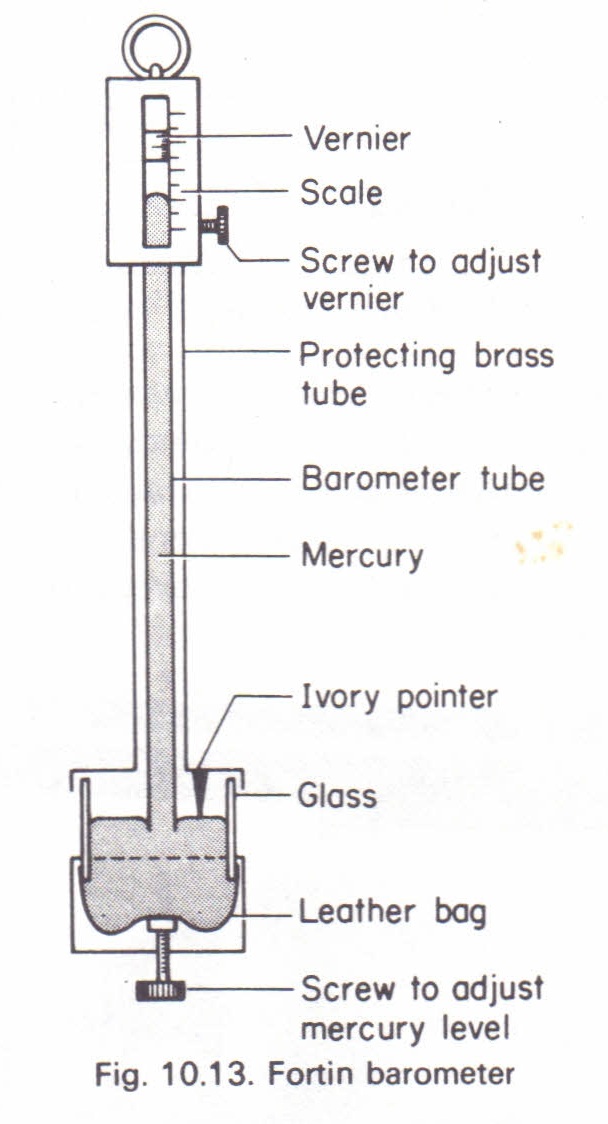 The scale on the side of the barometer gives the main part of the pressure reading and the vernier gives the decimal fraction.

Referring back to the question, the barometer doesn't float, the vernier scale is the item that "floats" by being adjustable.

The picture below illustrates the position of the vernier scale when taking a reading from a Fortin barometer. 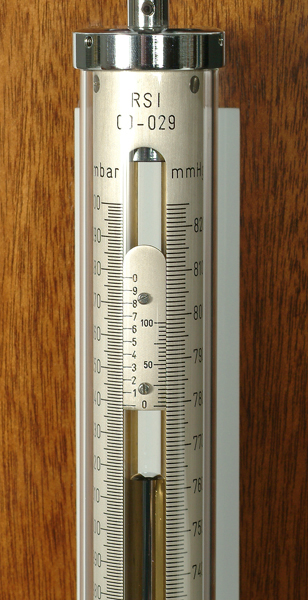 Not the answer you're looking for? Browse other questions tagged measurements barometric-pressure instrumentation history-of-science or ask your own question.

14
How are barometric pressure measurements traceable over centuries to 100 parts per million accuracy?

8
Checking the bedrock with radiowaves - how does it work?
2
How is surface pressure generally measured, and at what actual height?
5
What is a Rotating Shadowband Radiometer, and how does it work?
2
What is a Micro-Aethalometer; how do portable Black Carbon (BC) Monitors work?
14
How are barometric pressure measurements traceable over centuries to 100 parts per million accuracy?
2
How does a whirling hygrometer work, how does it differ from static dry/wet bulb thermometer, and how to obtain humidity from its readings?